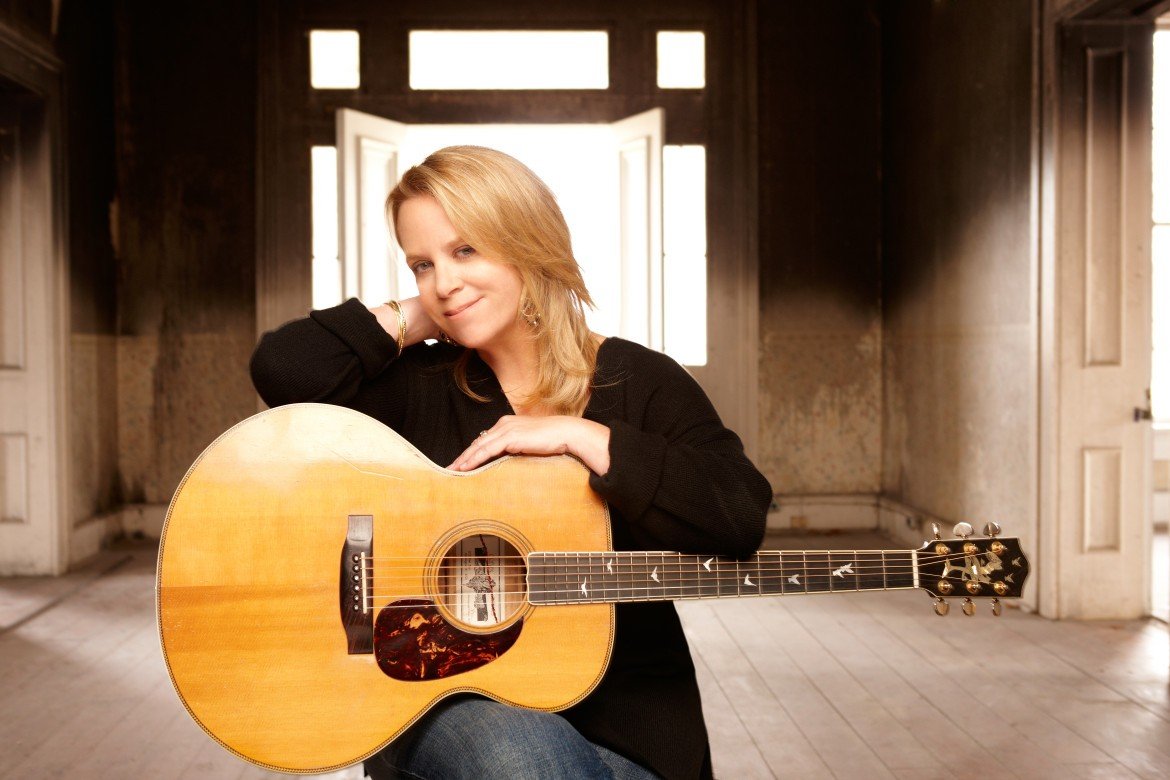 Mary Chapin Carpenter, the five-time Grammy Award-winning singer-songwriter with a 13-album catalog, returned to Minneapolis to play sans mosquitoes (her last Minnesota performance was at the MN Zoo Amphitheatre) at the Hennepin Theatre Trust’s State Theatre on May 2. It was an acoustic performance featuring her long-time friends and extraordinary musicians, John Carroll on keyboards and John Doyle on guitars and bouzouki.

Chastity Brown, a relative newcomer to singer-songwriter fame, opened with a 30-minute set featuring, among others, “Solely,” “Colorado,” and “When We Get There.” Ms. Brown sings with an old soul’s expertise and resonance. She has guts and she’s not afraid to show that. Her performance was acoustic—impassioned and spirited—interspersed with charming personal points of reference to how she made her way to Minnesota from Tennessee. (Read more about her in my review of a show at The Cedar in April 2013.)

Ms. Carpenter played many of her well-known and loved hits including “The Age of Miracles,” “Shut Up and Kiss Me,” “Chasing What’s Already Gone,” and “Rhythm of the Blues” among others. The show was, generally, subdued—her deep, rich voice complementing the lyrics perfectly while slowing tearing hearts wide open. Her two companion musicians were meticulous craftsman, sharing a honed perfectionism of their instruments. The mood, until broken with some impromptu Q&A, felt serious.

When Carpenter played Lucinda Williams’ “Passionate Kisses” I was expecting a bit of spirited reprieve, but the version she decided to sing that night hung on every syllable, making the ache expressed by the lyrics stretch out and quite frankly, almost break a heart. My companion for the show, a sister who introduced me to Ms. Carpenter back in the ‘80s, and I agreed that Carpenter’s performance sometimes felt like musical theater, a show made up of one-act plays. I suppose that can happen when an audience pays rapt attention to each story told in the songs. Carpenter’s lyrics are amazing, intense, meaningful and wicked smart.

Other songs to note include “Transcendental Reunion” which was prefaced by a tender story of a journey—of departures and arrivals, old neighbors and new relationships. This was followed by a more light-hearted (if made so only by her wish to share it with Mr. Darcy) rendition of “What If We Went to Italy.” In “Only a Dream,” she sang without her guitar, accompanied only by John Carroll’s piano, which was quite moving. The pinnacle of intensity and seriousness for the evening, however, came when she explained the history behind writing “John Doe No. 24.” Moving, humbling and inspired by real life, it’s worth looking that story up, let alone listening anew to the lyrics. (It already inspired some heart-felt comments on her Facebook page.)

A three-song encore wrapped up the night featuring “I Feel Lucky,” “He Thinks He’ll Keep Her,” and a track off her forthcoming album.

Over the course of her career, Mary Chapin Carpenter has sold more than 13 million records since her 1987 debut album. Her songs continue to speak to the most personal details and the most universal. Seeing her live is akin to hearing one of the greatest storytellers of all time.