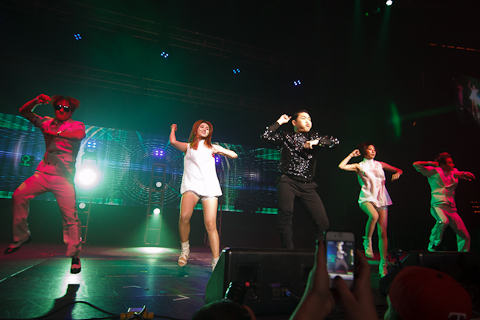 I appreciate concerns about network consolidation and the evils of Clear Channel, but even the most hardened cynic would have found it difficult to be too pessimistic about the homogenization of pop music on December 4 when an entire hockey arena full of Minnesotans were simultaneously performing a goofy dance they’d learned on the Internet from a Korean rapper who until this year was largely unknown in America.

By general consensus among the teenage girls I overheard discussing the Jingle Ball as we left the Xcel Energy Center, Psy was the crowd favorite among the several acts who took the stage for KDWB’s annual cavalcade of stars. Though the man who recently set a record for all-time YouTube views with his parody of Seoul high society was this year’s big story, the rest of the show resembled a miniature British invasion, with fully half the non-Korean acts representing the ascendant genre of Britpop.

The show’s two female performers came and went early on, performing second and third. Both Ellie Goulding and Cher Lloyd made their names via reality TV competitions in their native United Kingdom; though neither vocalist is as massively popular here as she is on the east side of the Pond, both had breakout hits this year. Both offered amiable performances, with Goulding spontaneously treating the crowd to an unplugged version of her hit “Lights” when a technical snafu derailed the full-band version.

After that, it was on to the evening’s main order of business: straight adult men performing for…well, everyone else.

The evening’s first artist, after a confusing introduction featuring songs performed by unannounced would-be up-and-comers and dances performed by men and women who seemingly couldn’t decide whether or not to keep their Santa suits on, was Conor Maynard, a self-effacing 20-year-old Brit. After Goulding and Lloyd came Owl City, the nom de pop of Owatonna native Adam Young. Clean-cut in necktie and sweater vest, Young happily disposed of his 2009 smash “Fireflies” early in his set, reserving the set-closing slot for a jubilant performance of his current hit “Good Times”—a duet with Carly Rae Jepsen that rescued both artists from one-hit-wonder status.

It was then on to what Pioneer Press critic Ross Raihala designated, via Twitter, “the Cities 97 portion” of the show. OneRepublic, Ed Sheeran, and Train have all managed to place hits in the top 40 and land heavy rotation on adult-contemporary stations—as Raihala noted, all three have had tracks on Cities 97 Samplers.

The sets by OneRepublic and Train were somewhat less invigorating for the many teen girls in attendance than for their moms, aunts, and teachers—at least one of whom was celebrating her night out in the seat next to me, and who was so aggressively (not to say drunkenly) pro-jubilation that every time I took my phone out to tweet, I was genuinely afraid she would rip it out of my hand and hurl it into the upper deck.

The laconic Coloradans of OneRepublic acquitted themselves well, frontman Ryan Tedder keeping things lively by ostentatiously wearing colors other than black (a right reserved in the band for he and he alone) and playing at least four different instruments over the course of the set.

Train, the 90s rockers who have now enjoyed a hitmaking career as long as Bruce Springsteen’s stretch from “Born to Run” to “Brilliant Disguise,” took the stage to the sound of—need I tell you?—and ran through several of their sturdy singalongs. New single “Mermaid” was done no favors by an awkward gimmick that had frontman Pat Monahan inviting a dozen-plus young “mermaids” onto the stage, where they stood taking pictures of the band and of themselves until finally permitted to leave. It was hard to escape the impression that if Monahan had kept them up there any longer, they would have started playing Angry Birds.

Between OneRepublic and Train came Ed Sheeran, yet another Brit, whose limpid hit “The A Team” (Mr. T has yet to weigh in on the ballad, but I’m guessing he pities the fool) didn’t prepare me for Sheeran’s dynamic live presence. He played alone with an acoustic guitar, building loops in a manner I’ve seen a million indie musicians do but never a musician working in such a commercial style. Sheeran built up to the evening’s biggest cacophony, pulling of what I can only describe as the best arena-scale busking I’ve ever seen.

Finally, the man of the hours emerged to a cacophonous reception, performing “Gangnam Style” twice with four dancers and a backing track. For the second rendition, Psy called for the house lights to be brought up; there was a long delay before his request was met, but it was worth it for the strangely touching, gloriously weird spectacle of all the near-exhausted ball-goers rousing themselves to gallop and lasso along with the artist who seemed poignantly aware of the transience of his cultural moment.

“This song is less than four minutes long,” Psy said, in a statement that epitomized the ethos of all great pop stars, “but in that time I’m going to give you as much as I possibly can.”