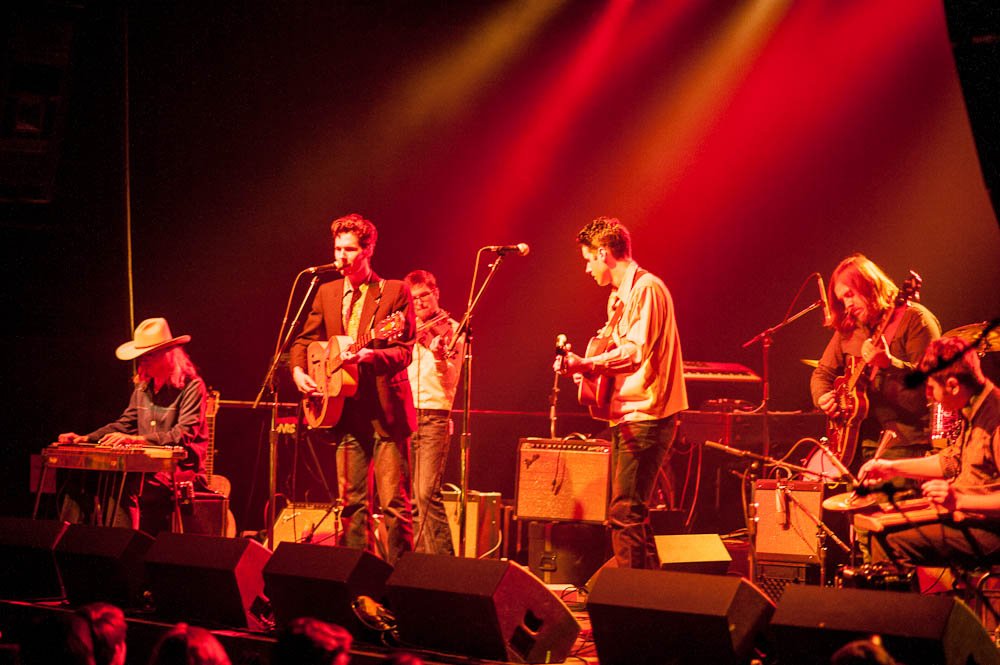 Going to the second night of The Current’s 9th Birthday Party show was a total bonus for me since I was supposed to be out of town working. I went with few expectations, expect the good time I had last year. I had seen half of the Saturday night’s bands before and the other two were new to me. It was a night of county bluegrass, hip hop, punk edge rock and R&B. I wonder if every city takes time celebrate such musical diversity under one roof.

Seeing Caroline Smith was new to me. She can just draw people just standing on stage. She’s cute as a button and she just seems like someone you want to like as the screen comes up and you can see her scramble for a pick. She has a great voice, very sweet and surprising light, like quick footsteps. It gives her R&B sound a faster tempo, which I like. And she is ably backed up by “the ladies,” including Hannah van der Hoff, who can really belt out a song on the rawer end of blues. The big hit of course was having Smith sing Magazine, and give a nod to The Current for playing it often.

On the harder side, Howler is a band I’ve seen a few times. I listen to them at gym; they’re a good band for setting a fast running pace. The music has a surf punk garage sound and they have remained true to it if the songs they played from the new album (due out March 25) are indicative of the rest. They are a young band and it’s fun to watch them on stage. They are great while they are playing music and I’m sure they’ll grow into the on stage banter—especially if they are watching how the other bands form the evening are doing it. It’s also kind of fun to watch them off stage. I enjoyed them because I like the music so much but the sound was a little tinny and echo-y, especially during Back of Your Neck, which was one of the big hits from the last album.

Heiruspecs was another new band for me. But I’m going to like any band that celebrates their St Paul roots! I’m warming up to Minnesota hip hop, but still not a genre I don’t know well. They were able to get the crowd going. The most dancing happened while they played. I liked them. I always like the pottery and cadence of hip hop – Heiruspecs adds a full band behind it, which adds great depth. Love a rap song with an old school rock guitar solo! I’m also impressed by the range of percussion and the hints of beatbox.

The night started out with Cactus Blossoms, another band I’ve seen often and really enjoy. They always play a nice mix of original and traditional songs. They are country bluegrass and for a fan of country bluegrass, it’s fun to see them play at First Avenue to a varied and more mainstream audience. I’m a Happy Man on a Gloomy Day captured the weather of the day and the tone of the Cactus Blossoms. No one can sing more upbeat songs of sadness and love gone wrong than the Cactus Blossoms—Today is a Sad Day to Be You, being my favorite example. They too had the full band out Steel guitar, violin, bass, accordion, and lead singers. Always fun.

Overall it was a good night and fun show. I do notice that each week “photographer alley,” the space between the safety gate and the stage seems to grow. And it’s starting to make me crabby because I think it keeps the diehard fans from the band and hinders dancing. First Avenue was my favorite place to see music, for decades. But really, I’d rather see Cactus Blossoms at the Turf Club, Howler was more fun at the Varsity last year and I feel like Heiruspecs could rock the Triple Rock. That being said First Avenue is First Avenue and I have to say how much fun it was to see former Twin Cities Daily Planet Arts Editor Jay Gabler on stage taking a nod with his new team at The Current. The Current does good work lifting up Minnesota musicians and keeping the Minnesota music-loving community singing and dancing to new songs from everywhere.

Check out photos by Meredith Westin from night one of The Current’s 9th Birthday Party.