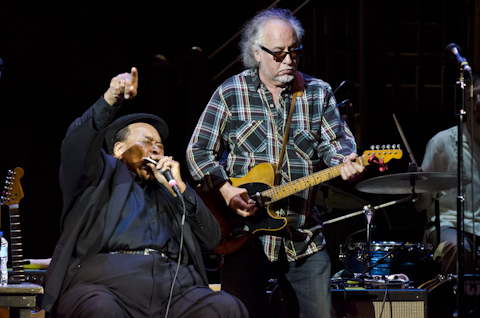 On Monday, February 4, a below-freezing night in Minneapolis, The Guthrie Theater hosted a hot session of “Blues at the Crossroads II: Muddy and the Wolf” featuring legends Jody Williams and James Cotton along with Tinsley Ellis, Bob Margolin and The Fabulous Thunderbirds featuring Kim Wilson. It was a tribute concert to Muddy Waters, known for blues-busting greats including “I Just Want to Make Love to You,” “I’m Your Hoochie Coochie Man,” and “Rollin’ Stone” (the inspiration for The Rolling Stones’ band name) and Howlin’ Wolf (“Wang Dang Doodle,” “Spoonful” (aka that spoon, that spoon, that spoooo-ooon), and “Back Door Man). Both Wolf and Waters were masterful blues players and writers, long standing friends, and held a friendly fight challenge over who reigned supreme over Chicago blues.

If you love blues harmonica, it was the right place to be. If you love blues guitar, you got that, too, but not so much. Wilson, the glue behind The Fabulous Thunderbirds’ wide-ranging talent, was the show’s emcee, and introduced the experienced and talented Ellis and Margolin for brief but powerful performances. That was too bad, as clearly Margolin (who learned for years at the right hand of Waters) had stories to sing for us. Ellis was wicked sharp on his guitar. Two or three songs seemed hardly enough to appreciate his skill.

Wilson, himself a 30 year veteran of playing with The Fabulous Thunderbirds and reportedly Muddy Waters’ favorite harmonica player, performed his blues favorites and struck out for a few intense, lingering solos, one time even venturing out into the audience to sit and play for a while. The man knows his harp, no doubt, and the crowd appreciated the attention. (Most of the crowd. There were a few grumbles about too much Wilson solo time upon leaving the theater.)

Jeremy Johnson, a local extraordinary blues guitar player, joined in for a couple songs—one being Sonny Boy Williams’ “Early in the Morning”. He came back for the finale, but again, it would have been great to hear more of him. The Fabulous Thunderbird players:  Johnny Moeller, Mike Keller, Randy Bermudes and Jason Moeller are seasoned pros who grooved gracefully through the entire show. They clearly worked hard and sounded great. A shout-out introduction would have been nice.

The concert was the strongest as blues legends Williams and Cotton graced the stage for only a bit-more-than-a-cameo performance. Unfortunately, the story telling was kept to a minimum although the audience did hear some ramblings about their long-standing careers. Williams had been recruited to play with Howlin’ Wolf in the 1950s, while Cotton played with Muddy Waters as early as 1955. So ya’know, they have interesting tales to tell. A night of just them, playing and sharing stories, would have been worth the price of admission. The men have presence—while onstage, there’s no denying you’re listening to blues: not R&B, not R&R. That was a gift.

Perhaps it’s because the tour plays different venues each night, but the show didn’t flow very well. Musicians had access issues with that stage, most likely due to its current backdrop of the A Long Day’s Journey Into Night set. My understanding is that the idea behind these “Crossroads” tours was to blend legendary playing with experienced backing and some story-telling history. It was hard to tell, sometimes, who was backing whom. But the camaraderie between the musicians was heartfelt, the talent extraordinary, and the sound was basically perfect. I prefer my blues with some smoke and alcohol, some stories and sweat, but for a fancy night out to hear some of the best blues musicians without any “guff’ was still a sweet gig.