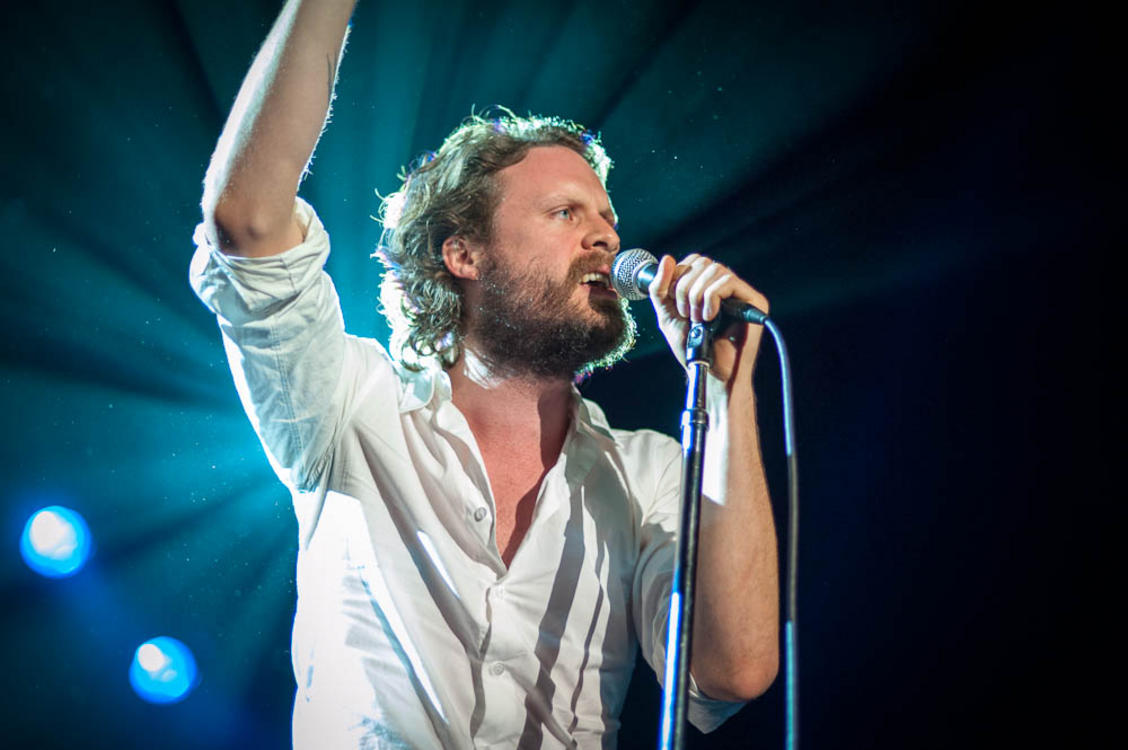 Last night on Tuesday, May 21, Father John Misty played to a packed house at First Avenue. Solid Gold was the first band. The hometown heroes got the room swaying and blinking to the strobe lights. It’s become rare to see a Minneapolis stage without the Hanson brothers , but again they got folks going.

The for those of us who have been going to shows at First Ave for decades the strangest thing happened. The first band stopped, the second band started and the curtain never came down! Almost alarming. I overheard someone say he was going to miss the awe of the curtain coming up on the band, rather than witness the inner working of the band preparing. But in a prescient move—they did play The Doors between sets.

Once Father John Misty took the stage we forgot the curtain. He is more than a singer, he’s an outright performer. He is very reminiscent of Jim Morrison on stage—well, based on videos I’ve seen anyways. Tall, super slim and writhing—just replace leather pants and no shirt with ripped blue Chino’s and a button down Oxford, which never came off despite desperate requests from the audience.

The stage setting deserves a mention here too—especially on the cusp of Minneapolis’s’ Art a Whirl. The backdrop was a painted mural that included rainbows, fireworks, Barbarella character on the cross and a stunning fish-belly white full nude (but modestly posed) picture of Father John Misty. You just don’t see that kind of ironic self aggrandizement on stage often enough.

Father John Misty’s style is playful and kind of smirky, which offsets the dark and sometimes violent lyrics nicely. The songs were great. I’m always impressed with a band that will play their most popular songs early in the show rather than wait for the encore.

What’s funny is how folksy the band sounds given the sold-out nature of the show. Although again the lyrics are dark. As a former English major I have to give props to any artist who can fit Malapropos and Misanthrope into a set. And the final encore (a new solo song by Father John Misty) was another hit with English major types, poking fun of the well simply incorrect, yet populate over usage of  the word “literally.”

It was a fun show. The music was great. I would love to see Father John Misty again somewhere else just to see if the antics and playfulness is the same in each town. There were a couple of local shout-outs. And he himself thanked the audience for putting on with obtuse remarks from the stage —and he is obtuse. But sometimes it seem like it would be nice to see Father John Misty step a little out a character. Along with Jim Morrison, the performance also reminded me of Glen Hansard’s show at First Avenue last fall. Both Misty and Hansard are consummate performers. But Hansard seemed more natural and as if audience was part of the show whereas with Misty he is definitely the show.

Also read Ryan Jasuda’s review of this show and Lisa Heymans’ review of Father John Misty’s 2012 performance at the Varsity Theater along with Meredith Westin’s photos.