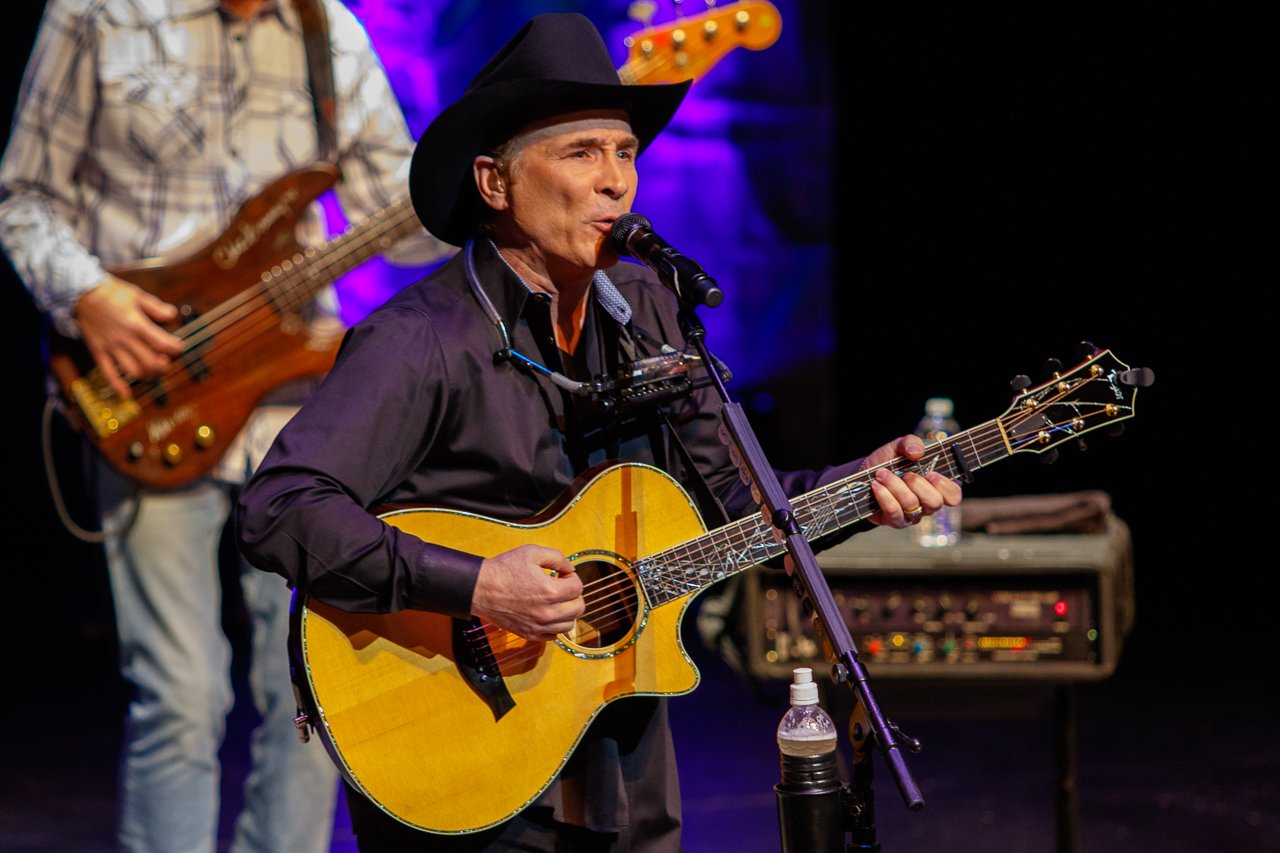 As New Country music continues to grow in popularity, many of the more traditional sounding artists are enjoying a renewed interest in their established catalogs of music as well. A perfect example is Clint Black who had a good amount of success in the ’90s with a George Strait style sound and major influences from legendary artists such as Waylon Jennings, Merle Haggard and Buck Owens. Some younger fans joined a mostly seasoned crowd of appreciators at the Ames Center in Burnsville on March 11th for a 90-minute set that covered a variety of material.

The show, titled “An Intimate Evening with Clint Black,” started out in just that fashion with a solo acoustic performance of “Live and Learn.” The scaled down format allowed Black to quickly demonstrate his skill on a six-string and the ability to pair it nicely with his twangy vocal, which sounded great. After a couple more acoustic selections including a cover of Willie Nelson’s “Time of a Preacher,” the four-piece band joined in adding full sound and tight harmonies on “Like the Rain.” Another one of Black’s overlooked talents stood out during “Code of the West” as he wrenched out a Blues inspired harmonica solo that really elevated the overall feel of the tune.

Another element that really added to the show’s entertainment value was Black’s sense of humor, which was a big part of his interaction with the audience between each seletion. Simple statements like, “Do you like to sing along? Well then here’s one you don’t know” drew plenty of laughter and just gave the show a lite and extra good feeling. For a nice switch in tempo, Black mentioned Lisa his wife of 23 years as the inspiration behind “Something That We Do,” a sweet ballad that was a standout. The Western Swing infused “One More Payment” was a lot of fun and gave Bass master Jake Willemain a chance to shine.

Throughout his career, Black has resisted using other songwriters and has proven to be very capable of handling the task himself, aptly demonstrated on hits like “Killin’ Time,” which had the crowd fired up and singing along. This track like many others happens to have been co-written by his extraordinary touring guitarist Hayden Nicholas, who had no shortage of WOW moments throughout the evening. Black announced “A Better Man” as the song that kicked it all off for him and it proved without a doubt to be the most popular song of the set. To top it all off, Black strapped on an electric guitar and played his best solo during “Tuckered Out,” the second song of the encore and final track of the evening. It was a solid and polished show from a quality artist that left fans walking away feeling entertained and satisfied. There’s not a bad seat in the house at the Ames Center and props to them for providing great sound throughout the entire show.