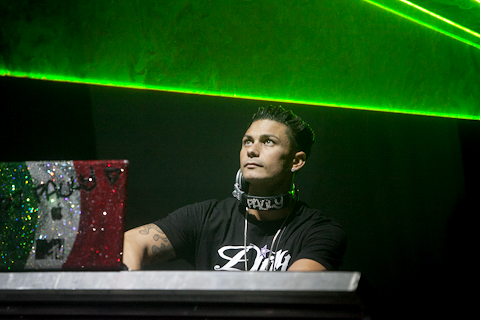 MTV’s Jersey Shore is a very polarizing show. There doesn’t seem to be much gray area between love and hate when it comes to this Italian-flavored, loud-mouthed, mostly-obnoxious reality television show. One of the show’s stars, Pauly D (born Paul DelVecchio), has been described as having “the mouth of a shark, the hair of a house fire, and the subtlety and class of neither.”

Before becoming a reality television star, Pauly was a DJ, and according to his MTV cast bio, he is “Rhode Island’s most well-known DJ.” On an episode from Jersey Shore‘s first season, he claimed to be “your girlfriend’s favorite DJ.” (Well, Mr. D, I don’t have a girlfriend, so the joke’s on you, buddy!) Knowing Pauly D is not famous for being humble, I wanted to investigate those claims and find out for myself. I finally got the chance when he played at Epic on Friday night in a show put on by Trilogy Productions.

I arrived at Epic expecting a much bigger crowd; perhaps the $20-30 ticket prices were a bit off-putting to some casual fans. The crowd slowly filled in as the time got closer to Pauly D’s set, but at no point in the night did I have a hard time getting up close to the stage. I was expecting to see a lot of people dressed as if they could be a cast member on Jersey Shore, but there weren’t as many as I anticipated. I only saw about eight or nine popped collars, and I didn’t see a single girl get punched in the face.

One stereotype did prove true, though: sparkles. Sparkly clothes in all directions, as far as the eye could see. It was no surprise when Pauly D’s D-ssistant brought out Pauly’s laptop to see that it was designed to look like a sparkly Italian flag. He also had headphones that had Pauly written on them in, you guessed it, sparkly letters.

After a couple warm-up DJs, Pauly took the stage and opened with Duck Sauce’s “Barbara Streisand,” followed by LMFAO’s 21st-century coming-of-age anthem “Shots.” The rest of his two-hour set consisted mostly of popular electro and hip-hop songs, and what sounded like a few of his own tracks. I was very surprised by how little he got on the microphone. I figured he would have been constantly shouting about t-shirt time, but he only used the mic a few times. He was focused on his laptop intently for most of the show, with all the enthusiasm of someone filling out an online application to work at Walmart. In the same way that one should be wary of a skinny chef, a DJ that doesn’t dance is not to be trusted.

Since computer DJ programs such as Serato and Traktor have hit the market, pretty much anyone with the money for it can become a DJ. Pauly D is certainly a product of the computer DJ generation. I didn’t hear too many slip-ups and his set wasn’t terrible, but it was totally unremarkable and no different than what might have been heard at any of the nearby clubs and bars on 1st Avenue. Many long-time DJs feel like they have been slapped in the face with the success that Pauly D has achieved as a DJ and the huge fees he commands, and after hearing his set, it’s hard to disagree with them. Earlier this year Pauly was included as a candidate in a contest that allows fans to vote for their favorite American DJ, and in one of the more unfortunate results of the democratic process in recent history, he placed eighth.

The show made it obvious why Pauly D refers to himself as “Rhode Island’s most well-known DJ” and not Rhode Island’s best DJ, because while the first is now probably true, there has to be at least one better DJ from Rhode Island, right? I sure hope so, for Rhode Island’s sake.

I do have one nice thing to say about Pauly D, and that is that unlike his co-stars, who make similar amounts of money to just show up at a bar and get drunk and have their picture taken like they would on any given night, at least Pauly D is doing something for the money. He might be getting paid about 40-50 times what he would be getting paid if he’d never been on TV, but he’s at least sparkling for his supper.