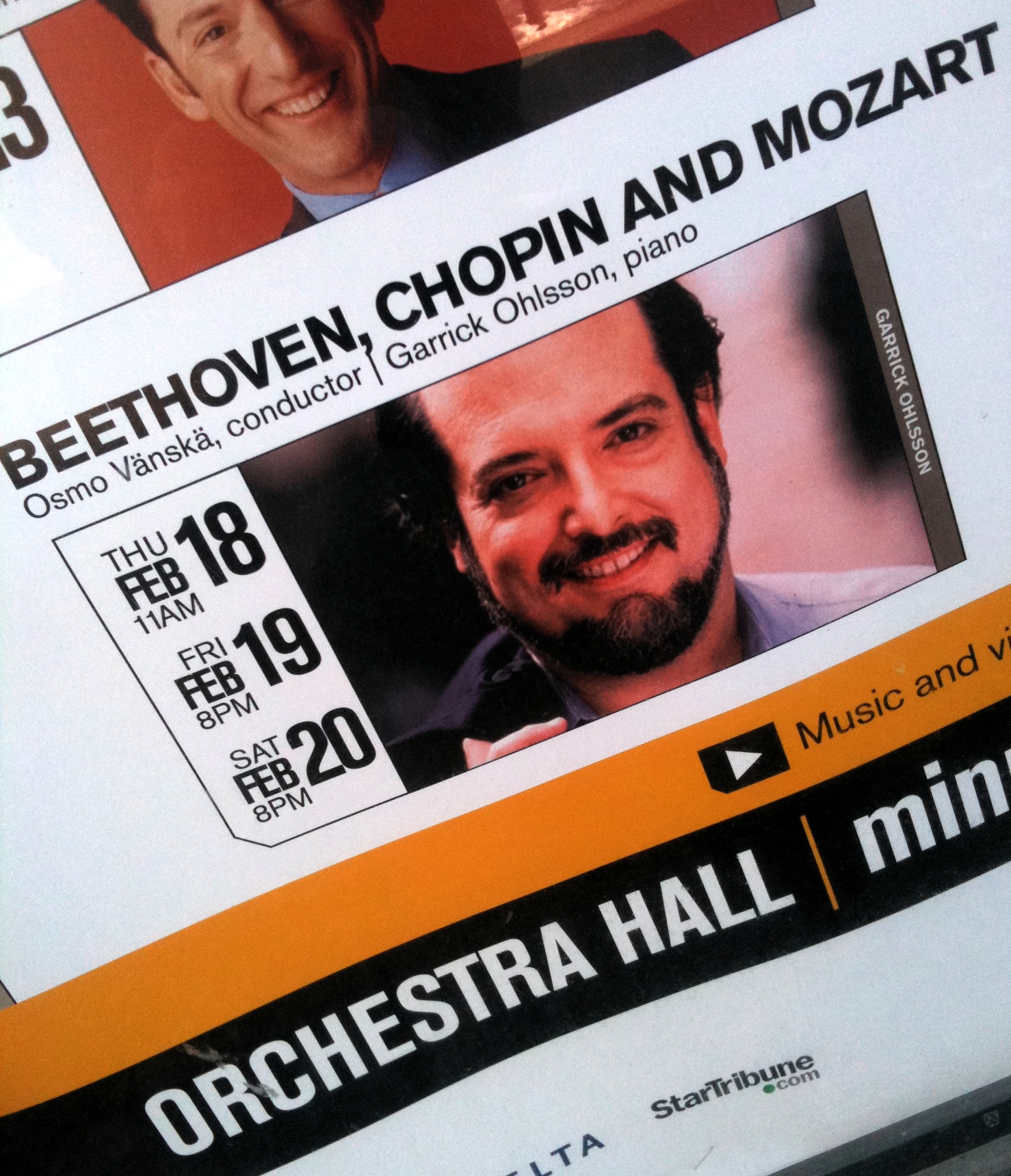 At the center of the proscenium at Boston’s Symphony Hall, high above the orchestra and the audience, hangs a medal bearing a single word: beethoven. There’s no such iconography at our own Orchestra Hall—all we have for decorative details are those big cubes embedded in the wall. At Thursday morning’s performance, though, busloads of schoolchildren leaning from the third balcony stood in as polo-clad cherubs.

Though its reverence for Beethoven isn’t embedded in its architecture, the Minnesota Orchestra has nothing against that Prometheus of Romanticism: the Thursday morning program, which is being repeated Friday and Saturday nights, began with a 17-minute piece that encapsulates the composer’s brilliance as well as the “Ode to Joy” or the “Moonlight” Sonata. The Grosse Fuge, originally written as the conclusion to Beethoven’s Op. 130 string quartet, was so forward-thinking that at its 1826 premiere it caused many to judge the composer mad. (Of course, by that point Beethoven’s personal life had provided more than a few other justifications for such a judgment.) Beethoven later wrote an alternate conclusion to the quartet, publishing the Grosse Fuge independently; many recordings of the quartet now include both conclusions, so a playlist-making listener can choose his or her own adventure.

The version of the Grosse Fuge presented in this program is Michael Steinberg’s 1982 arrangement for string orchestra, but though the late Steinberg (who was married to a Minnesota Orchestra concertmaster and wrote many program notes for the orchestra) created his arrangement explicitly to correct for what he called the “sentimentalizing” tendencies of Felix Weingartner’s previous attempt at the task, the piece still loses rather than gains by the additional padding. Under the baton of Osmo Vänskä, Steinberg’s instrumental colors were muddy in the first half, and though the piece snapped into clarity by its conclusion, I was left wanting to hear the piece in its bare original state.

Next up was a performance of Chopin’s second piano concerto with soloist Garrick Ohlsson, one of the world’s premier interpreters of that composer’s work. February 22 will be Chopin’s 200th birthday, so Ohlsson—who first performed with the Minnesota Orchestra in 1971—has been busy. When the tall pianist stepped onstage, a man sitting behind me exclaimed, “Whoa! He’s a big one! That piano had better behave!”

In fact, though, Ohlsson’s strongest asset is his lightness of touch: Chopin’s rich figures flow from Ohlsson’s hands like cream from a churn. Ohlsson and Vänskä partnered well, leaving generous room for one another in a performance that nonetheless kept the orchestra where, per Eric Bromberger’s program notes, the composer meant it to be: in “the shade.” (Chopin premiered the piece himself at age 20 and never wrote another piano concerto, preferring to focus on the unaccompanied piano.) I’ve never been a particular aficionado of Chopin—maybe I just can’t get over the abuse his work has taken in soft-focus made-for-TV romances—but those who are will surely not want to miss Ohlsson’s bicentennial appearance.

After intermission, Vänskä led his band in his first Minnesota performance of Mozart’s Symphony No. 40, which despite being one of Mozart’s stormier symphonies (and one of only two written in a minor key) sounded crisp and light after the head-case Fuge and the swooning concerto. I don’t think anyone went home and smashed their Furtwängler CDs, but it was a fine performance, with a notably crisp tempo in the concluding Allegro.

After the musicians stood for their ovation, the guy behind me turned to his companion and said something very Minnesotan, but also very apt: “Aren’t we lucky to have them?”