They only have one album, and it’s pretty good, but it’s the kind of “pretty good” that hangs on your heartstrings like a cow caught in a barbed-wire fence. It’s music that’s engineered for live performance, with insistent rhythms and crashing choruses. And they’re not bad-looking, either—especially angel-faced frontman Marcus Mumford. And they’re British. The sellout crowd at First Avenue on Friday night would be melting from the music, and then Mumford would open his mouth to say something and the crowd would completely evaporate into clouds of Anglosexual quarks. I was standing near the back of the Mainroom, but I imagined that when the crowd collectively sighed, they would close their eyes and have love you written on their eyelids like Harrison Ford’s anthropology student in Raiders of the Lost Ark.

The energy in the room was simply incredible. I’ve been to some intense shows at First Ave—M.I.A., Lily Allen, Old 97’s—but I can’t think of a show where the crowd was so completely captivated from the front row clear through to the back of the mezzanine. It was clear that people have lived with this music and developed a relationship with it, and they greeted Mumford & Sons like mothers greeting their children come home from college. Lights were strung across the room, creating a warm piazza-like atmosphere, and bright backlights were used judiciously to add drama and punctuation. When a problem with the power supply affected the band’s amplification, they stepped out in front of the mics for an acoustic singalong that made for a memorable moment.

It was not a perfect show; the set sagged towards the middle, and Mumford’s stage banter was not as charming as his smile. (It’s a persistent challenge for international artists touring the U.S. to avoid revealing their understandable anger at the country that inflicted the George W. Bush administration on the world for eight years, and a shouted crack about Gordon Brown pushed Mumford over the edge.) But the high points, of which there were many, were about as high as it gets. The band actually turned the loose pacing to their advantage, shambling along like the charming rake who takes his sweet time lighting a cigarette before he deigns to flirt with you. He knows that when he gets around to it, he’s going to take you home. 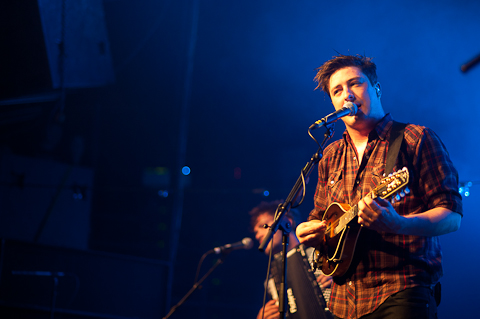