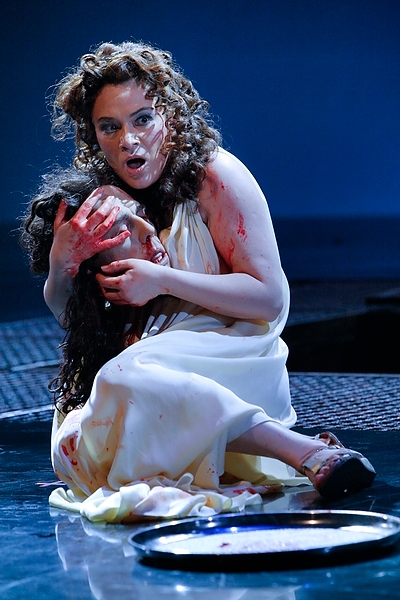 Salome is advertised as “scandalously erotic,” a phrase that certainly describes the 1905 opera as writen by Richard Strauss with a libretto inspired by Oscar Wilde’s play. Strauss was a composer who balanced an all-too-keen appreciation for the dark side of human nature with a distinct flair for the dramatic, and who had a way with the orchestra the way Jimi Hendrix had a way with the guitar. Salome is one of the most slashingly entertaining operas in the repertoire, and the Minnesota Opera Orchestra’s no-holds-barred performance of the score under conductor Emmanuel Joel-Hornak is by far the highlight of the current production. If you close your eyes, your heart might race at the thundering timpani, braying horns, and shivering strings.

Why? Well, despite the thrilling instrumental performances and the fine singing, the production is about as erotic as a seven-bean salad. Mlada Khudoley has a powerful voice, but her Salome in the early scenes of the single-act opera is all girlish petulance, literally hopping around in frustration and pouting at Jason Howard’s boringly pious Jokanaan (John the Baptist), who costume designer Jennifer Caprio tricks out in luxurious black locks and a long six-pack-baring dungeon jacket, as though Fabio had selected Nice ‘n Easy #122 to make ready the way of the Lord. One is left with absolutely no impression that either the princess or the prophet would have the first idea what to do if they actually did make it into bed together—a little cuddling, maybe, and then she’d ask to braid his hair.

When Herod (Dennis Petersen) talks Salome into dancing for him (more excited hopping, this time on the king’s part), Khudoley and three superhumanly straight-faced courtiers commence a routine, choreographed by stage director David Lefkowich, that begins with Salome popping up Esther-Williams-style from among her escorts, proceeds to mock-dramatic games of veil-tugging and peek-a-boo, builds to Salome doing an Exorcist-style crabwalk over the dungeon gate, and climaxes in a moment of nudity that seems perfunctory rather than provocative and is reversed so hastily that at Thursday night’s performance one of the courtiers was actually chasing Khudoley off the dais, tugging at her costume to be sure the diva’s breast was once again fully veiled.

The martyr’s noggin is duly delivered—I don’t think I’m giving any big surprises away here—and Lefkowich smartly pulls Steve TenEyck’s unexceptional set away entirely to leave Khudoley alone onstage with her gory booty. The aria Salome delivers to the severed head should be tragic and terrible, but the Thursday night crowd laughed several times as Khudoley cradled her prize, laid upon it, rolled over it, and whipped it about, spraying a liquid that looked less like blood than like cherry cough syrup. Khudoley is big-voiced in her despair, but only Petersen succeeds in communicating a true sense of horror.

The vast silliness of this production is a shame, since Salome is an opera that offers great opportunities and great challenges. (In another production, the opera’s treatment of Jews—Strauss pledged allegiance to Hitler, at least until the Führer inconveniently demanded that the composer renounce his favored Jewish librettist—might be problematic, but here that element just gets washed up amidst the general flotsam of goofiness.) It’s hard not to recommend that you hear such a scintillating performance of Strauss’s epic score, accompanied by capable singing, but take note: in this production, Eros lives entirely in the pit.