Casanova’s Homecoming was the first opera my girlfriend ever attended, and she thoroughly enjoyed it. She’d been expecting something a little harder to relate to—like, say, Clytemnestra—but instead she discovered a boisterously bawdy story, engagingly told. The fact that I didn’t rave about the opera only piqued her curiosity about what the rest of the season must hold. “I’m excited,” she exclaimed, “that you say this sucks!”

Be it noted that Anna was paraphrasing, rather than directly quoting me; for the record, I wouldn’t say that Casanova’s Homecoming entirely sucks. This revival of the 1985 opera, which was written for by the opening of the Ordway Music Theatre, has much to recommend it—principally, an amusing libretto and enthusiastic performances.

The opera, which is touted as having been “based on the memoirs of the real-life Casanova,” is set in 1774, when Casanova (John Fanning) returned to Venice after an 18-year exile. The plot turns on Casanova’s attempt to swindle a superstitious old widow (a gleefully wacky Jean Stilwell) out of her fortune so as to provide a dowry for a young friend (Naomi Isabel Ruiz) who’s engaged to a penniless poet (Brad Benoit). An ulterior motive is to disenfranchise the widow’s nephew (Dan Dressen), who’s jealously humiliated Casanova by tricking him into attempting to seduce a castrato (Lauren McNeese). The revelation of the supposed castrato’s true nature is the first of several surprises Argento’s Casanova has in store over its three acts.

Whereas many operas require study of the program notes before, during, and after the production to follow the plot, Casanova’s Homecoming is easy to follow; you don’t need to know the plot in advance to figure out what’s going on. Onstage, in fact, the opera unfolds very much like a play, with few pauses for arias: the speak-singing is almost continually advancing the story. The Pioneer Press review of the opera’s original production cited its “rich, opulent melodies,” but that reviewer must have been referring to the orchestral themes, because to my ears Argento’s characters don’t care to waste much time on opulent melodies. (You know how it is: so many women, so little time.)

My principal disappointment with the current production is that it seems to be at odds with itself. Argento’s libretto, the performers, and director James Robinson are under the impression Casanova is a humorous romp; but Argento’s music, the sets by Paul Steinberg, and lighting designer Aaron Black seem to think the opera is Don Giovanni. While the performers hop about the stage gamely enacting Argento’s clever plot and dropping bon mots to the audience’s delight, the sets loom darkly, the footlights cast ominous shadows, and the sterling St. Paul Chamber Orchestra is compelled to surge into crashing waves of turgid neo-Romantic music that had me wondering whether Wotan was going to descend from the heavens or Kevin Costner was going to come galloping from the eaves. There’s a perfectly fine fantasy overture in there somewhere, but the sturm und drang is at odds with Argento’s gently comic libretto. 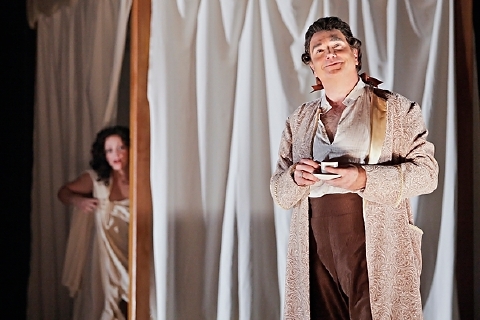 To be fair, it seems to be one of Argento’s goals to send up operatic conventions: one scene set at an opera house interpolates period music with the Casanova score to humorous effect, and the performers occasionally break out of song (though not out of character) to say what they really think. It’s a tricky task to mock a genre while working within that genre, and unfortunately Casanova throws out the baby with the bathwater.

I mean it as a sincere, not a backhanded, compliment when I say that Casanova’s Homecoming is nonetheless fresh and accessible: a contemporary opera that neither strives to replicate past classics nor to push the avant-garde. Argento isn’t the only composer to go this route—John Adams and Thomas Adés are among those who have done it more successfully—but Casanova will be a happy surprise for many people who think they know what to expect at the opera. The production fails to connect with much emotional force…but, well, that does give you something to look forward to later on in the season.