With the Minnesota Opera’s production of Bizet’s The Pearl Fishers, designer Zandra Rhodes makes it official: 80s nostalgia is out, 90s nostalgia is in. When the curtain rose at the Ordway, I realized that I hadn’t seen such a shameless collision of pink and turquoise since Target’s winter coat section circa the first Clinton inauguration. What’s more, the ceremonial garb worn by the “primitive” Ceylonese looks like something you’d see on an alien planet in Star Trek: The Next Generation. When the opera’s heroine landed herself in hot water, I was half-expecting Riker and Data to materialize with phasers at the ready.

I kid because I love. Rhodes’s design was the most buzzed-about aspect of this production, and indeed her taste for supersaturated shimmer makes for an eye-popping show. An opera staging succeeds or fails, however, on the strength of its performers’ musical skill—just ask Susan Alexander Kane—and in that respect, this production is just as dazzling.

At the center of the opera are the members of a love triangle: Zurga (Philip Cutlip) and Nadir (Jesus Garcia) are obsessed with the same woman, Leila (Isabel Bayrakdarian)—who inconveniently has sworn chastity so that the gods will bless the season’s pearl harvest. Leila plays a little hard-to-get when Nadir sneaks into her chamber of purity and jumps on top of her, but not hard-to-get enough for the gods, who lay waste to the village. Chief Zurga must then decide whether to pardon his old pal Nadir and his fallen maiden Zurga or whether to accede to his constituents’ bloodlust.

Even classical-music buffs might have a hard time naming a Bizet opera besides Carmen, but The Pearl Fishers (libretto by Eugéne Cormon and Michel Carré) is a wonderful composition, with a crackerjack Big Tune in the mens’ duet “Au fond du temple saint.” Where the colors onstage are applied with a broad brush, Bizet’s sublimely lucid orchestral colors are daubed with a feather. The excellent Minnesota Opera Orchestra, conducted by Leonardo Vordoni in his first performance at the Ordway, makes the score glow in a manner that highlights the Gallic lineage between Bizet and the Impressionists Debussy and Ravel. (Rhodes’s set design, in turn, nods at Matisse’s dancing figures and Rousseau’s jungles.) 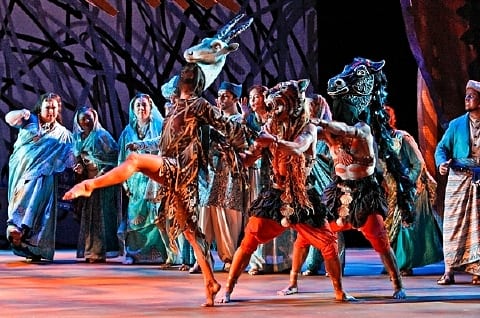 All three lead vocalists are technically impeccable, though Cutlip is a little wooden compared to the supple Garcia. (To be fair, Cutlip’s physical resemblance to David Hasselhoff might have biased my impression of his performance.) The Lebanese Bayrakdarian is so confident in the power and precision of her instrument that she’s almost strident—but that tack has worked pretty well for Christina Aguilera, and Bayrakdarian makes it work for her too. It helps that she’s an empathetic actress, communicating with her eyes the vulnerability not to be found in her bulletproof vocal tone.

As if that weren’t enough to recommend this production, it has a hidden weapon in choreographer John Malashock and his tireless troupe. The dancers—who include several members of the Zenon Dance Company—need to be tireless, because they’re called upon multiple times. Malashock’s choreography doesn’t just pass the time and provide visual variety, it adds real emotional weight, particularly in a number where the villagers enact the hunting of a stag (or something; I’m not that great at classifying sequined ungulates) to represent their seething impatience for the execution of Leila and Nadir. The choreography is sensual without, exactly, being sexual; the minimal costuming Rhodes provides the dancers might remind you of the, er, anthropological interest so many teenagers have taken in documentary photos from National Geographic. (Granted, not everyone will find the loin-wraps erotic: “I was a little distracted by the diapers,” said my sister.)

By the opera’s conclusion, so many characters have invoked the gods’ wrath—on themselves or on one another—that the gods might have been forgiven for just throwing up their hands and smiting the lot. If there are in fact opera gods, though, they seem to be smiling quite warmly down upon this superb production.