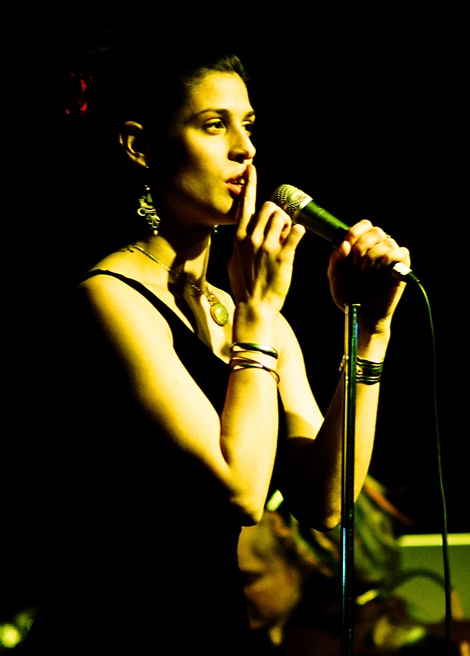 Dessa (below, with Doomtree). Photos by Jon Behm. For more photos from the show, see reviler.org.

Doomtree MC Dessa Darling released her long-awaited record A Badly Broken Code on Friday night to a (very) sold-out show at the Fine Line Music Café. Sporting a black dress and a flower in her hair, Dessa charmed the audience with her very R&B-focused new material, as well as some down-and-dirty hip-hop.

Though the emcee’s lyricism is fraught with self-doubt and heavy introspection, she displayed none of those characteristics onstage. With a coy smile and a few good-natured jokes, Dessa showed fearless self-confidence and a willingness to have fun. Set standouts included a biting rendition of “Children’s Work,” as well as a lovely version of “The Chaconne,” which featured great backup vocals from Jeremy Messersmith and Aby Wolf. Messersmith was also the show’s first opener, and the soulful songwriter informed the audience that “I’ve been trying to con my way into Doomtree forever, and tonight is finally my chance.”

When Dessa’s solo set was finished the emcee, was by no means done. The whole Doomtree crew were in the house, with Cecil Otter opening the show with his beatnik hip-hop and the rest of the gang bumrushing the stage to finish things off at the end of the night. With boundless enthusiasm, POS, Mike Mictlan, Sims, and Dessa worked through a number of Doomtree tracks, holding down the stage when it seemed the audience was going to burst all around it. 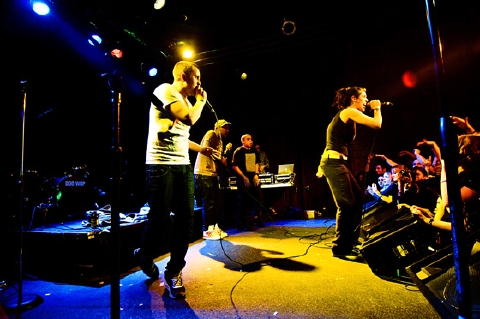 DJ Paper Tiger worked behind the scenes supporting the emcees with timely beats. “Gander Back” was particularly intense, shaking the tiny club to its foundations while Mictlan, POS, and Sims whirled around the stage like a bunch of spinning tops. The emcees’ camaraderie was infectious, making the tightly packed room feel as if it was full of old friends. Sadly, across town violence was simultaneously breaking out at the Twin Cities Hip-Hop Awards, but as a testament to Doomtree and their fans, on the north side of downtown there was nothing but love.