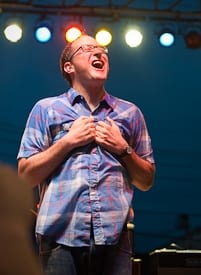 Craig Finn of the Hold Steady. Photos by Meredith Westin.

I was one of the less exuberant concertgoers in the first few rows of the audience at the Cabooze plaza on Saturday night for a performance by the Hold Steady, so perhaps it was by divine intervention that I was visited, in succession, by three spirits of rock ‘n’ roll.

First came the Raver, a woman in a hot pink bikini top, numerous colorful tattoos, and bright purple dreadlock ponytails. She pushed brusquely past me, threw her arms in the air to elbow me in the throat, sang along with the entirety of one song, then smoked an American Spirit and disappeared.

Next was the Worshipper, a guy in a Twins cap (with matching tattoo) and a lei, who stepped forward and gazed rapturously up at the band, swaying slightly and mouthing the occasional lyric.

Finally was the most assiduous: the Mosher. Clad in a white t-shirt and a dirty peace-symbol trucker cap, this guy leapt into the front rows and threw his body around with complete abandon for the remainder of the show, as though someone at the sound board was using his voodoo doll to play xylophone with a row of dolls representing the rest of us.

Despite the sprits’ intervention, though, I never smoked, shouted, or shot up. It was my first time seeing the band, which has a reputation as one of the best live acts in the country. 38-year-old frontman Craig Finn was a Minnesotan until 2000, when he moved to New York and founded the Hold Steady. There’s been debate over the extent to which the Hold Steady can be called a “local band”; in the wake of that discussion, my first impression of the Hold Steady was that they could not any more precisely look like a New York band fronted by a guy who grew up in Edina.

While the rest of the band dressed in black and persistently wore the vaguely bored expressions familiar from a million indie-rock bands’ promo photos, Finn appeared in a bright blue plaid shirt, grinning from ear to ear, gesturing spastically, dancing with a caffeinated shuffle (the rest of the guys drank beer onstage, but Finn stuck with Diet Coke), and clapping his hands with manic glee, looking for all the world like a software engineer who’d just won Karaoke Idol at a hotel bar. I appreciate that Finn’s contagious enthusiasm is exactly what makes the band such a memorable live act, but I also found the show to be kind of a weird spectacle.

The audience’s response to the show, though—singing and gesturing along with Finn’s rapid-fire speak-singing—brought into relief why the Hold Steady are also so good on record. Finn tells his wry, often nostalgic, stories in his trademark nasal growl over a foundation of surging, anthemic rock. His songs are dense with precisely detailed, evocative references to people and places often recalled from his youth in the Twin Cities. Finn’s knack for the telling detail is something he shares with Bruce Springsteen; Minneapolis is his Asbury Park, and just as there’s no place like the Stone Pony to see the E Street Band, there’s no place like the bar where an underage Finn had his fake ID confiscated (“I don’t blame them; it was a piece of shit”) to see the Hold Steady.

Openers the Whigs were a spectacle of a somewhat different kind. The Georgia trio played with a classic-rock crunch and a country-rock swagger, their long hair whipping in the wind. They don’t grab their crotches onstage, because they don’t need to: you can hear the pelvic thrusts in the music. (When I told a Whigs fan of my acquaintance that if she wanted to interview the band by phone, I could possibly make that happen, she replied, “How about an interview in person, in bed? Could you make that happen?”) Drummer Julian Dorio plays powerfully but completely slack-jawed, as though all the blood flowing to his arms leaves none to animate his face; the bronzed and booted Timothy Deaux plays tough and melodic bass lines; and frontman Parker Gispert works the machine-gun-guitar move like he invented it. Rock ‘n’ roll!