Hidden Cameras (above and below), Gentleman Reg (bottom)

Everyone knows Dexys Midnight Runners for their 1982 hit “Come On Eileen,” but the entire album the song comes from—Too-Rye-Ay—is a cult favorite among devotees. To me, the album sounds like ten attempts to write “Come On Eileen,” with only the last being successful. From the evidence at the 7th Street Entry on Wednesday night, the Hidden Cameras have a “Come On Eileen” in them. Song after song seemed poised to erupt into irresistibility.

The eruption never quite happened, and whether the musical blueballing was the fault of the songs, the band, or the crowd became something of a matter of contention toward the set’s close, with frontman Joel Gibb growling, “Are you going to fall asleep while we play our encore? Come on! It’s not a school night.”

Well, actually, it was—which is not to say that should have stopped anyone from partying, but surely many members of the decent-sized crowd had been up early for work yesterday morning and would have to be up again today, so there might have been a more gracious way to handle any seeming lethargy. It was nearly 1 a.m. by that point, and people were indeed sagging, having failed to rise up to their collective aspiration, voiced earlier, to compete with the band’s San Francisco audience for enthusiasm. “You don’t understand,” said Gibb. “San Francisco is crazy.” 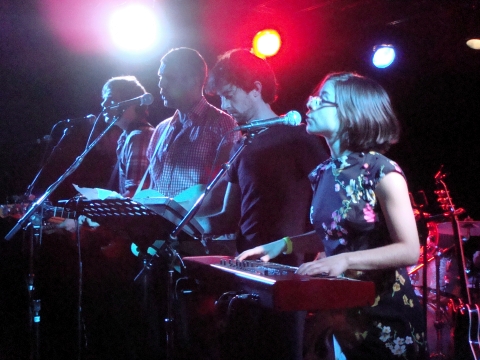 I believe it. I first became acquainted with Hidden Cameras when Last.fm recommended the group to me on the basis of my affinity for all the various musical projects of Stephin Merritt. Gibb has described Hidden Cameras’ sound as “gay church folk music;” in addition to the gayness, Gibb and Merritt sharre a taste for the eclectic, the theatrical, and the tuneful. Though Gibb doesn’t have Merritt’s musical genius (few do), he actually enjoys performing live—unlike the famously reclusive Merritt—and Gibb’s merry band put on a great show. I can only imagine the reception they meet in San Francisco, or New York, or their home town of Toronto. Daily Planet writer Sheila Regan, with whom I attended the show, called out asking Gibb what we needed to do to compete with the San Francisco audience, and he pointed to a woman in the front row. “Start by dancing with her. Go ahead, she’s hot!”

Dana Snell, drummer for opening band Gentleman Reg, turned to Sheila and said, smiling, “Don’t do anything he says.”

Hidden Cameras played many songs from their new record Origin:Orphan, and though I like the album, the live show convinced me that the band needs a new producer. On record, the songs sound dark, gothic, and unapproachable; last night on stage, they burst into life. Gibb’s theatricality helped to make the show memorable: the band took the stage in hoods, chanting. Later, members of Gentleman Reg appeared to wave flags, lead the audience in a choreographed dance, and hop around like pogo sticks. If our energy was flagging by the close of the set, it was in part because the band had plumb worn us out. 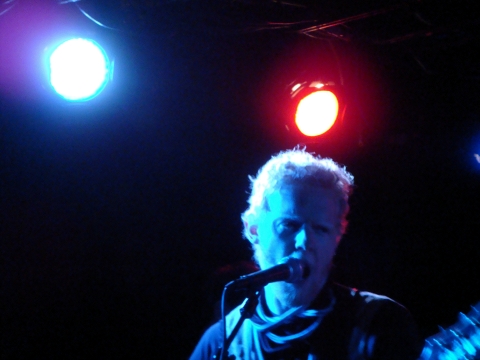 Gentleman Reg were a pleasant surprise: another band whose recordings fail to capture the richness of their live sound. Singer/songwriter/guitarist Reg Vermue performed with precision and passion, his songs enhanced rather than muddied by the band’s arrangements. I particularly enjoyed Snell’s playing: like Ringo, she’s powerful without being showy. There would certainly be enough show to go around by the time the evening ended.

Even when Gibb got a little testy, his many admirers were unfazed. For the last number, Gibb pulled a particularly enthusiastic fan up on stage to play tambourine. “Fuck all the rest of you,” he said.

The response came from a man standing a few rows back: “In what order?”