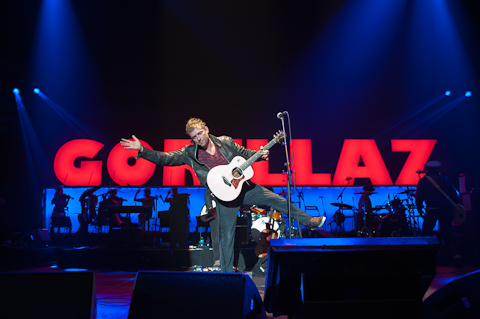 Most truly great frontmen (and frontwomen) are so natural at what they do, it’s hard to imagine them being anything other than rock stars. Mick Jagger as an accountant? John Lennon as a park ranger? It feels blasphemous just to entertain those possibilities. But spend some time studying Damon Albarn, and you’ll see that while rock star is a natural hat for him to wear, he could just as easily be a statesman or a professor, ready to spread messages of peace and cross-cultural understanding to his disciples. On Sunday night, he found his disciples while wearing the rock star hat: in the audience of Gorillaz fans packed into the Target Center, eager to witness the spectacle that is the band’s first world tour, “Escape to Plastic Beach.”

Gorillaz are unlike most bands that cycle through Twin Cities arenas, charging $50-100+ for the pleasure of seeing them with thousands of other fans in massive sporting stadiums. For one thing, Gorillaz haven’t established a live audience by playing successively larger venues. This was their first concert here, so for many in the audience, this was our first time seeing them live. For another, they’re less a band than a musical project, created by Blur frontman Albarn and English comic book artist/designer Jamie Hewlett. A perpetually-rotating lineup means little consistency across their 12-year history, save for Albarn and a few of the virtual members (Gorillaz were originally a cartoon band), whose images are projected onto a gigantic screen behind the stage. And so Gorillaz are less about nurturing a particular sound and more about nurturing a vision, though they manage to accomplish both quite effectively.

It’s hard not to wonder whether Gorillaz new album Plastic Beach was produced with the live show in mind. The album’s intro orchestral track opened the concert to images of Whoville-like structures on the screen, acquainting us to this imaginary world that existed simultaneously with the musical performance on stage throughout the show. And as all good imaginary worlds should be, this one was fantastical: as the album’s second track, “Welcome to the World of the Plastic Beach,” began, Snoop Dogg (yes, Snoop Dogg) appeared on screen dressed as a ringleader, accompanied by an 8-piece brass band on stage. Snoop may have been the one wearing the ringleader’s jacket and introducing us to the hour-and-forty-minute extravaganza, but this was clearly Albarn’s show. He oscillated between hanging in the back while others musicians took the spotlight, and swaggering across the front of the stage in true frontman style, equally comfortable in both roles. While the show was his (and Hewlett’s), it wasn’t only about him.

When Gorillaz were founded, Albarn and Hewlett’s vision was to comment on the MTV culture of all flash and no substance. The band members would be virtual characters living out fake rock star lives in a virtual universe, and we wouldn’t know who the true members of the band were. Now, their goal is less to deconstruct the elements of pop culture they see as harmful, and more to elevate the kind of music and stardom they value. The Clash’s Mick Jones and Paul Simonon rocked it on lead guitar and bass while wearing sailors’ outfits (incredible, right?). Legendary soul singer Bobby Womack sang a song off of Plastic Beach called “Cloud of Unknowing” as the first song of the encore.

Damon also incorporated into the show his growing interest in working with international musicians and fusing musical styles. “We’re being joined the whole tour by a collective of Arab musicians,” he said. They launched into a couple of traditionally-styled folk songs, before a couple MCs joined them on stage for a buoyant hip-hop number. Albarn sat at his piano bench watching and bouncing in excitement before grabbing an oversized white flag and passing it into the audience.

The mix between older Gorillaz songs, with their highly danceable beats, and the newer, more eclectic and atmospheric Plastic Beach tracks worked surprisingly well. The audience was still most excited to hear songs like “19-2000” and “Dare,” but the new material was well-received too. We were reminded of Albarn’s longstanding pop-melody-writing chops with “On Melancholy Hill,” but the subsequent transition into “Rhinestone Eyes” made me wish some more of the new Gorillaz songs were of that ilk. The most energetic part of the set came during the encore, with back-to back “Feel Good Inc.” and “Clint Eastwood.” We benefited from the fact that Gorillaz hasn’t played many live shows; Albarn didn’t seem tired at all by these two radio-played singles.

The encore ended with a large version of a very large song: “Demon Days.” The layering of voices and instruments on stage was set against images of the virtual band preserved in stained glass on the screen. The arena suddenly had a cathedral-like feel to it, though I must admit it veered into “We Are the World” territory at times. While Albarn gracefully accomplished his goal of nurturing cross-cultural and cross-generational understanding throughout the show, it felt a bit overwrought at that point. Nevertheless, I hope he and Hewlett keep with what they’re doing. Gorillaz is a musical project that provides continually-interesting music in a continually-challenging package. The music stands just fine on its own, but its the live show added a new dimension to its impact. 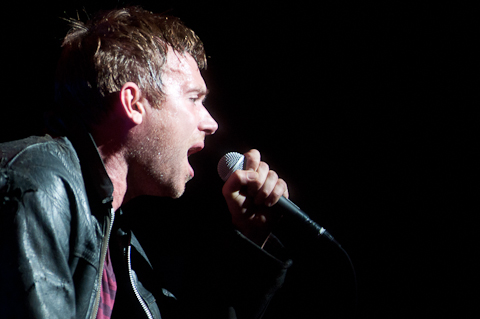 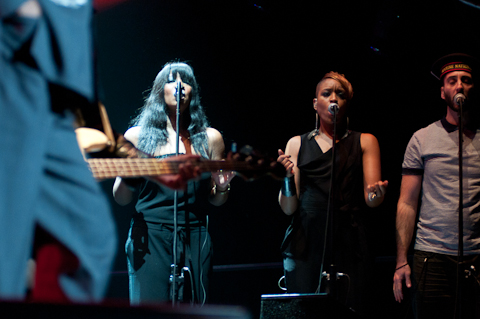 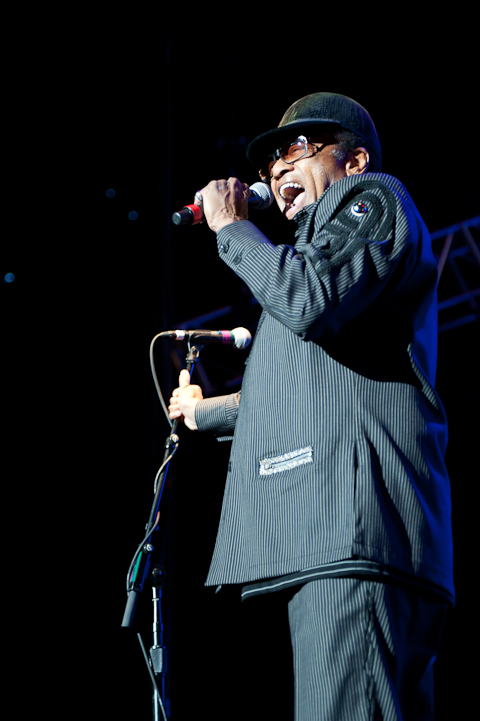 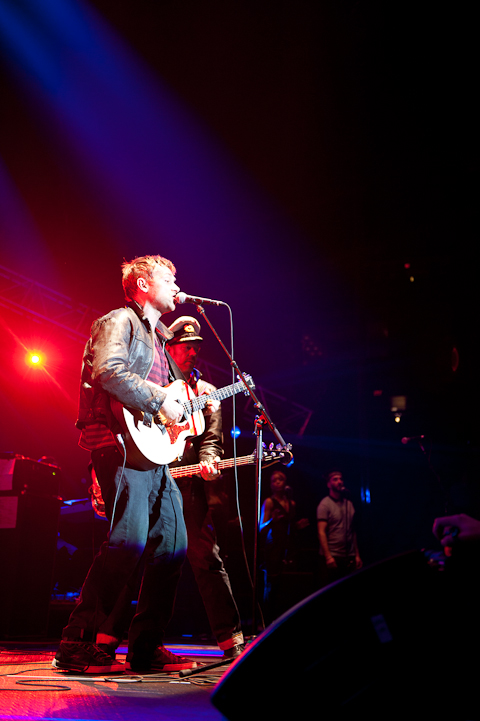 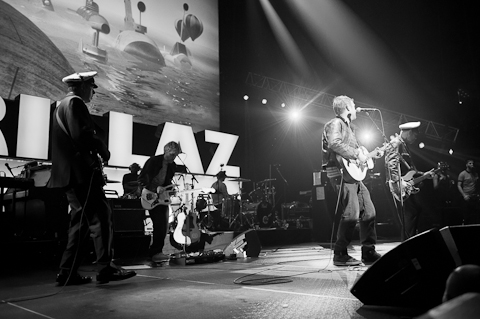 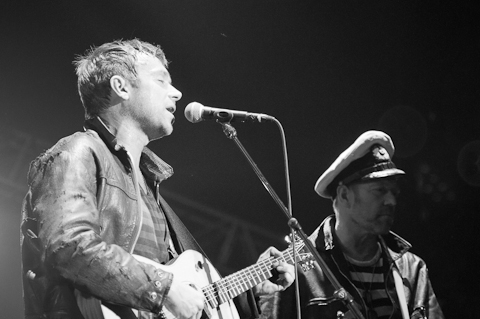 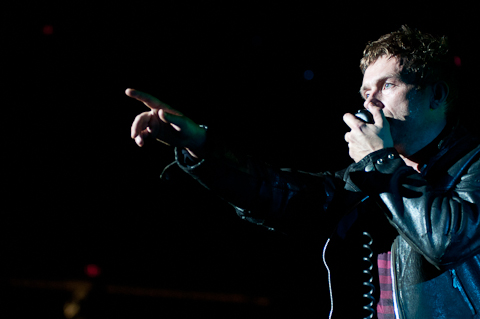 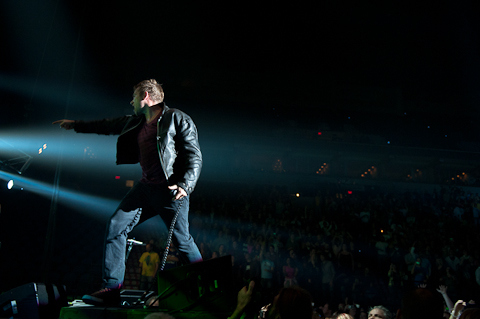 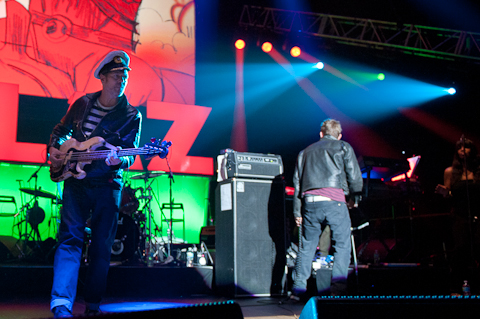 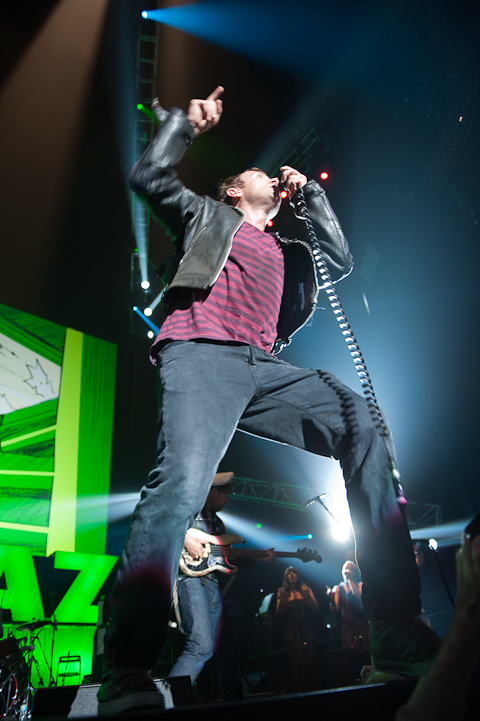 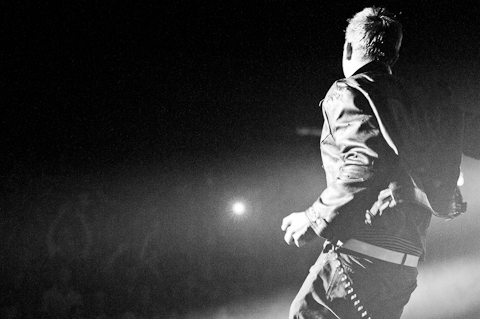