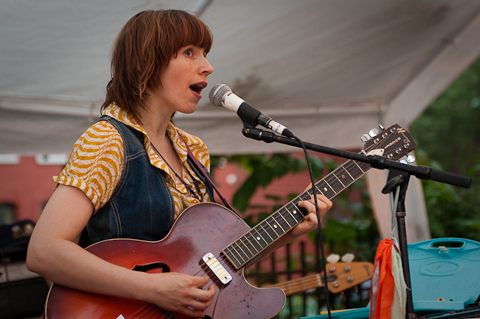 “We’ve been really excited for this,” Kat Burns of Forest City Lovers told the backs of two bocce spectators in the Nomad World Pub courtyard on Wednesday night. The Toronto band have a new song called “Minneapolis” that they proceeded to play in the eponymous city for the first time. When the song ended, a raucous cheer went up. “I don’t know if that was for us, or if something exciting happened in bocce,” admitted Burns.

Even a band with four albums to their credit and 200,000 plays on Last.fm (the same number as, for example, Haley Bonar) still have some dues to pay when they go on the road, and Forest City Lovers rose to the challenge of the unusual gig—announced at the last minute and scarcely promoted—by playing a heartfelt set of lovely songs to an audience consisting of me, photographer Meredith Westin, a few people sitting over by the pub door, and a row of bocce-watchers’ asses.

Burns’s voice and phrasing are very similar to those of Camera Obscura’s Tracyanne Campbell, and Forest City Lovers’ new album Carriage often recalls that band’s orchestral folk-pop—albeit more sparsely arranged, with occasional interludes of experimental wandering a la St. Vincent and a few dashes of uptempo pop-rock. It’s a nice album, and the songs bloomed in the band’s impressively (given the circumstances) committed live performance. Drummer Christian Ingelevics is a standout, playing deft and complex arrangements that are impressive both for their dexterity and for the way they serve the songs rather than distracting from them.

As the band concluded its set, Burns thanked the bocce players—for nothing, really, but she was very gracious. “I hope,” she said, “you all won.”