Bruno Ribeiro with Brenda Harris (above) and Tamara Klividenko (below) in Roberto Devereux. Photos by Michal Daniel, courtesy Minnesota Opera.

It’s often said about old cars and old houses that you can maintain them, but you could never build them again. The same is true of classic Bel Canto operas: they don’t make ’em like that any more. (That said, if any composer in the postmodern era were to sustain the concentrated sincerity necessary to write three hours of solid emoting, a reasonable pastiche might be hard to tell from the real thing.)

Roberto Devereux is the first in the Minnesota Opera’s mounting of Gaetano Donizetti’s “Tudor trilogy,” three operas about the lives and loves of British royalty in and around the tumultuous Elizabethan era. (Next up is Mary Stuart, slated for next season.) The appeal of the source material is understandable: for a while, the British nobility were outdoing even the Roman gods for outrageous—not to say incestuous—sexual-political intrigue.

It’s not one of Donizetti’s greatest works, and as a composition, it’s kind of like Bob Dylan’s recent album Together Through Life: if you’re a fan of the artist, you’ll lap it up. If you’re not, you can skip it. The stormy French composer Hector Berlioz notoriously argued that Italians only want sensual pleasure from their music: “They want a score that, like a plate of macaroni, can be assimilated immediately without having to think about it.” Of course that’s unfair to Italians, but Roberto Devereux is not the composition with which to challenge Berlioz: without any outstandingly memorable melodies, it bobs along from ardor to heartbreak to fury to regret with the pleasant motion of a sailboat cruising the Mediterranean on a steady keel.

Director Kevin Newbury wisely keeps the production’s focus right where it belongs: on the singing, supported by the supple baton of Francesco Maria Colombo. If your performers can’t sell the product in a Bel Canto opera, it’s going to flop no matter what you do, so your best bet is to cast wisely and trust the singers to carry the production. In the central role of Elizabeth, Brenda Harris starts out unpleasantly brittle but warms up remarkably as her character’s façade cracks in the third act. Tamara Klivadenko is immediately winning as Sara, Elizabeth’s rival for Roberto, Earl of Essex. Lester Lynch earns sympathy with his sturdy portrayal of Sara’s hapless husband. 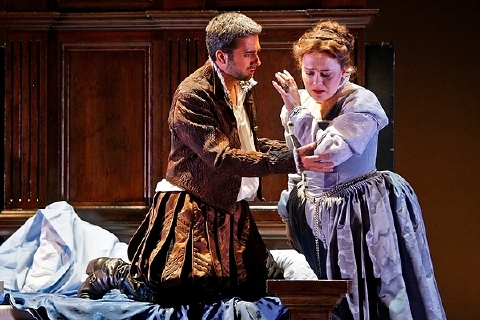 Bruno Ribeiro is powerful as the title character, but he’s hamstrung—like Klivadenko and Lynch—by a plot that’s dramatically inert for the opera’s first two acts. (The libretto by Salvadore Cammarano was taken from a play by Jacques-François Ancelot, inspired very loosely by actual events.) All the real action has taken place before the curtain even rises: Roberto is returning from the battlefield, facing charges of treason for showing mercy to a defeated enemy, but his real crime is failing to reciprocate his queen’s abiding affection. He’s fallen for Sara; though both parties, at various times, deny that the love affair has been consummated, their denials sound about as plausible as the Shaggy Defense. It takes most of the opera for everyone just to figure out what the score is, at which point the question becomes whether or not Roberto will die for his offenses. (My aunt found it hard to swallow that it would take Elizabeth so long to discern the identity of Roberto’s secret squeeze: “When you’re queen, you have people for things like that.”)

The set design by Neil Patel is superb at underlining the opera’s themes without getting in the way. A massive ceiling, gilded and ornately molded, hangs high above the performers, serving as a physical correlate for the weight of tradition hanging heavily upon the characters—and also as a reminder that for all the talk about fourth-wall this, fourth-wall that, no one ever notices that in most sets, the whole damn ceiling is missing. Substantial set elements descend from the ceiling, most provocatively a concave wall with a cross of Christian proportions cut out and ominously underlit in red as Roberto faces his doom. The backdrop is a simple scrim, lit in eye-popping hues that change from scene to scene. The period costumes by Jessica Jahn are suitably dramatic—particularly Elizabeth’s royal gowns—without being laughable. (After all, we are talking about men in bloomers here.)

As Bel Canto operas go, Roberto is no Barber—but if you have a soft spot for florid opera done well, you’ll enjoy this production. If, however, it’s not your idea of fun to listen to hours of passionate singing about the kind of boyfriend-stealing scenario that one might find enacted (probably minus the threat of beheading) in any given junior high, you might find yourself rewriting Samuel Johnson: “It is done well, but one is surprised to find it done at all.”