The Big Pink. Below: Crystal Antlers. Photos by Jon Behm.

A day prior to the Thanksgiving holiday, Twin Citians packed the 7th Street Entry near to bursting for British rock band The Big Pink‘s performance. The touring band recently scored big with their first record, A Brief History of Love, leading to tickets for the band’s Minneapolis live debut to sell out quickly. And while the Entry is no bigger than an average sized café, the show almost seemed to be a rehearsal for the larger venues that are sure to come soon in the group’s promising future.

For one thing, they absolutely saturated the tiny club in fog machine smoke—a tactic that works well in big spaces but in the Entry’s confines led to a somewhat noxious lack of breathable air. There were also enough strobes packed onto the stage to fill a much larger room with light, lending the venue the surreal aspect of a hyper-lit Japanese game show. Still, despite the technical annoyances the band put on an admirably energetic set, strutting through the smoke and lights like the glam rockers of yore. Set standouts included singles “Velvet” and “Dominoes,” in addition to almost all of the material from the band’s only album.

California psych/garage band Crystal Antlers opened the show, and as far as energy per capita went, they gave the headliners a run for their money: belting out their moody, reverb-laden psychedelia with sweat and fervor. The band wisely chose to include a large number of songs from their fantastic debut EP, propping up the less accessible work from this year’s Tentacles. Even if perhaps the club’s legions of Big Pink fans likely had no idea who they were, the Crystal Antlers went above and beyond to earn the audience’s favor. Those expecting a blowout headliner were doubtless pleased to find two great bands for the price of one. 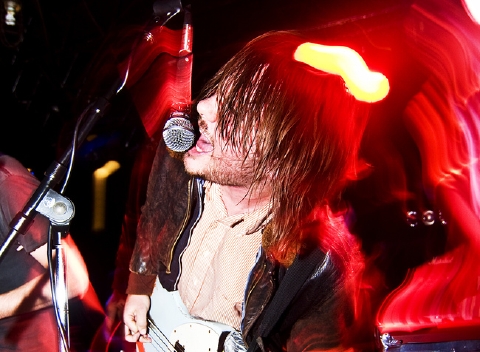