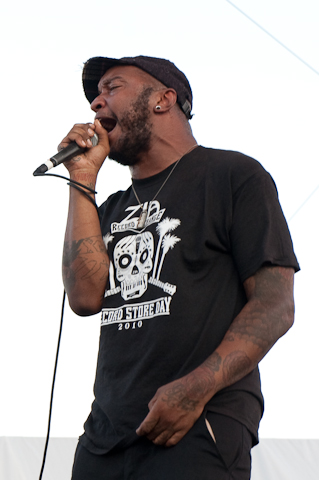 For the first time in its 28-year history, the Taste of Minnesota brought a Minnesota flavor to its musical lineup in addition to its food. While the latter part of the weekend still featured classic summer touring acts like Sammy Hagar and Counting Crows, Friday’s schedule was clearly designed to curry—successfully—the favor of regular listeners of 89.3 The Current, a station that champions local music and sponsored the day’s lineup.

Main stage headliners Atmosphere and P.O.S. delivered the consistently strong performances fans of Minneapolis hip-hop have come to expect from them. It was hard not to compare Friday night’s performances to their more dynamic Soundset 2010 showings just a little over a month prior, though. This was perhaps most apparent when P.O.S. and fellow Doomtree Collective emcee Sims took on “Low Light Low Life.” It’s a crowd-rouser when other members of the collective (like Dessa and Mike Mictlan) join in, but felt anemic with only the two emcees to back it up on Friday.

Atmosphere took the stage as the sun was setting over the St. Paul skyline, with a set about as Minnesota nice as hip-hop can get while still nodding towards the hard-knock life. (Sample lyric: “I hope your car starts on the first try.”) In turn, the crowd played nice and kept the moshing to a minimum, but were still clearly psyched to watch the cornerstones of Minnesota’s hip-hop scene do their thing.

The most exciting part of the day came earlier in the afternoon, however, with a set in the smaller City Pages tent by Minnesota’s adopted sons Dawes. The foursome are from L.A. but noted during their June gig at First Avenue that they “sometimes feel more like a Minneapolis band” thanks to the overwhelmingly positive reception they get here. This sentiment was reinforced on Friday when lead singer and guitarist Taylor Goldsmith asked the audience a favor halfway through the set: “If you ever get a chance to see Dawes in a city other than Minneapolis, please don’t come. It doesn’t get better than Minneapolis, and I wouldn’t want you to be disappointed.” (He later remembered he was in St. Paul and corrected himself, though I doubt the audience is going to listen to his advice regardless.)

Dawes walked into their performance knowing (or hoping) that the audience would let them go several songs before playing any of their Current-spun crowd pleasers like “That Western Skyline” and “Love Is All I Am.” And the gamble paid off. The audience seemed enamored and well-familiar with all the songs on their 2009 release North Hills, prompting singalongs and much head-bobbing throughout their performance. Our patience was further rewarded with a heartbreakingly beautiful rendition of “Peace In The Valley” towards the end of the set—a North Hills track the band rarely play live.

Taylor and the rest of Dawes seemed especially vibrant when playing their new songs, namely “Fire Away,” which featured the vocal and instrumental intensity of drummer Griffin Goldsmith, curly-haired younger brother of Taylor. Good things, it seems, are in store for the bands’ sophomore release.

Dawes ended their set in the only way they could, with the leg-stomping “When My Time Comes,” whose chorus was belted out by the audience when Taylor turned his mic their way. With lyrics like, “Oh you can judge the whole world on the sparkle that you think it lacks/ Yes you can stare into the abyss, but it’s staring right back,” it is poised to become the anthem of Generation Y if Dawes ever catches fire in other parts of the country like they have in Minnesota.

The Taste acknowledged we have talented musicians outside of the metro area as well, with a late-afternoon City Pages tent performance by Duluth band Retribution Gospel Choir. They brought an intensity to the stage that might have made one question their Minnesota roots, the band members’ black button-down shirts becoming completely soaked through with sweat not even halfway through their set.

Their songs tend to crescendo into all-out grunge rock jams, which worked well enough in the outdoor festival setting, but I imagine are even more powerful in dimly-lit clubs. Nevertheless, hearing “Hide It Away” and “Your Bird,” with the dynamic drumming of Eric Pollard and the vocal force of Alan Sparhawk, was an immensely satisfying experience.

While there was some initial grumbling over the Taste’s new $20-$30 entry fees, Friday’s musical lineup proved itself well worth the ticket cost. The audience was excited to cheer on hometown favorites, the bands were grateful to play to energized crowds in the midst of long summer touring hauls, and a warm glow of Minnesota pride rose up over Harriet Island to blanket the St. Paul skyline as the first day of the Fourth of July weekend wound to a close.