Hundreds packed St. Mark’s Episcopal Cathedral, just off Loring Park, on Thursday night for a religious experience far different than the church’s usual rituals. The presiding figure in this case was none other than violin virtuoso Andrew Bird, whose current tour is utilizing a number of churches for their high-ceilinged acoustic merits. Doubtless the ministers were jealous of the rapturous adoration paid to the nearly two-hour performance, as Bird cast texture upon texture of sonic fabric over the enthralled crowd.

Bird performed without electric amplification; rather, all the sound was piped through a set of five custom-made gramophone-style horns. The unorthodox setup made for an extremely intimate performance as the horns sent the music bouncing across the large hall’s many nooks and arches, until it sounded as if it was coming from all around the audience. Bird’s storied whistling in particular, almost seemed to come from within the crowd rather than without. As is his modus operandi, Bird recorded and looped layers of violin, guitar, xylophone and vocals, becoming a one-man orchestra. In several songs Bird was joined by Minneapolis native instrumentalist Mike Lewis, though for the most part he held the pulpit on his own.

The set was largely instrumental, with Bird singing on just a handful of tracks. Standouts included crowd favorites “Natural Disaster” and “Why” and also a number of new songs like “Danse Caribe,” a Caribbean-influenced track that Bird wrote just last week, and an unnamed instrumental joint that Bird admitted “sounded like a George Harrison Christmas song.” Bird also covered the Handsome Family song “The Giant of Illinois” and performed a terrific version of Bob Dylan’s “Oh Sister.” 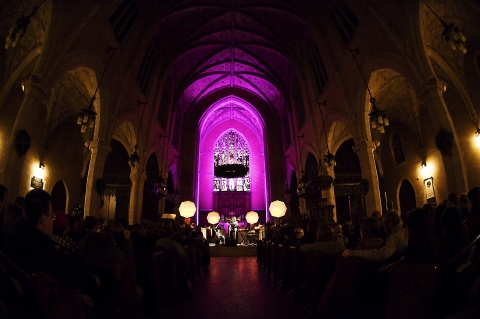 The show’s length definitely tested the buttocks’ endurance in wooden church pews, but the performance was so utterly spellbinding that a sore backside was a small price to pay. For anyone who didn’t get a chance to experience it, Bird will be playing one more once-in-a-lifetime (or, at best, thrice-in-a-lifetime) shows at St. Mark’s on Saturday night. Highly recommended. 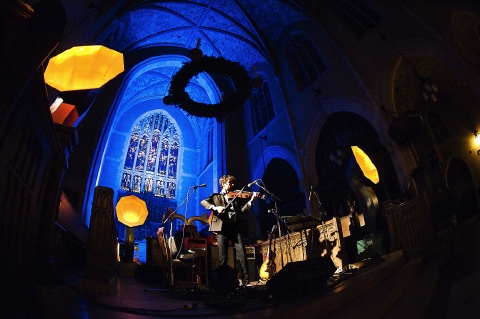