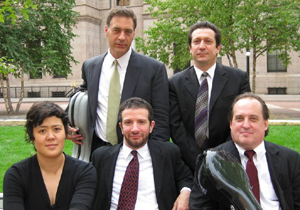 A sizable crowd of attentive and discerning chamber music fans settled in at the Southern Theater on Sunday evening for the first of two performances of a program of music by Debussy, Ravel, and Stravinsky presented by Accordo, a new instrumental supergroup comprising members of the Minnesota Orchestra and the St. Paul Chamber Orchestra (SPCO). How good is this group? Imagine if Prince, Slug, Paul Westerberg, and Haley Bonar were to jam together. Actually, that would probably be absolutely terrible…but Accordo sound great.

Cellist Anthony Ross, whose biography in the program notes that he is “now in his seventeenth year of dynamic leadership of the Minnesota Orchestra cello section,” served as the evening’s genial emcee, speaking with interest and enthusiasm about the pieces presented—though he once provoked unintentional laughter when he glanced at Asian-American violist Maiya Papach for confirmation of his assertion that the open harmonies of Debussy’s String Quartet in G minor give the piece “a sort of Asian aroma.” Performing on violin were SPCO concertmaster Steven Copes and Ruggero Allifranchini, also of the SPCO.

The Southern proved a remarkably suitable venue for the performance. It’s best-known as a stage for dance, but the acoustics are excellent and the steeply raked seating provided an excellent view of the musicians’ faces and fretwork. Most chamber music is presented in concert halls where the audience looks up at the performers or in rooms where simple chairs surround the musicians on a flat floor; in neither case are you really able to see much of the action. Copes, Allifranchini, and Papach should return to the Southern soon with the rest of the SPCO. (They’ll be back at the theater Monday night to repeat Sunday night’s program with Accordo, which will return again in April with a different program.)

Accordo’s musicianship is world-class, and though the audience’s gasps of emotion and leap-to-your-feet ovation were a little overdramatic, the performances were indeed sizzling. Stravinsky’s engaging Concertino for String Quartet was a bonbon to begin the evening, and a welcome echo of the Russian-American master’s “aroma” for anyone who also attended the epic performance of The Rite of Spring recently played jointly by the SPCO and the Minnesota Orchestra. Closing out the first half was Ravel’s rich Sonata for Violin and Cello, in which Copes shone and at the conclusion of which Ross, in his passion, accidentally sent his bow flying across the stage. Debussy’s sole string quartet occupied the program’s second half, the players exploring the Impressionist’s daring harmonies with feeling and precision.

My only disappointment was seeing that the audience looked much more typical of an Orchestra Hall crowd than a Southern Theater crowd, despite the fact that the show was sponsored by Vita.mn, a publication that much more typically plugs hip-hop and rock shows. Here’s an idea: what if Accordo promoted their April show by opening for one of the dance companies or theater troupes playing at the Southern in the meantime? I know that wouldn’t be a very glamorous gig, but after all, every new group has to pay its dues.