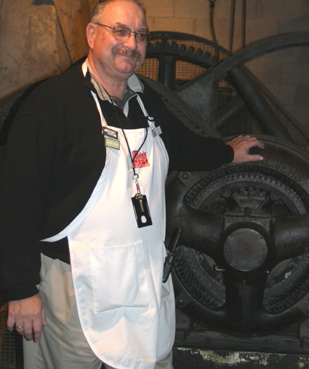 Listening to the roar of St. Anthony Falls eight stories below, Terry Sventek squints into the winter sunlight. “Look at those falls,” he says. “They’re beautiful. And they’re the reason Minneapolis is here.”

“Those falls” are the only major waterfalls on the entire 2,300 miles of the Mississippi River. Nineteenth-century settlers recognized the falls’ enormous potential and clustered nearby. The 15-foot drop doesn’t look all that impressive to the casual observer, but it had a huge economic impact on the growing city of Minneapolis, powering lumber-milling and flour-milling industries and making possible the first municipal hydroelectric plant in the country.

Sventek is a big guy with wide shoulders. Even as he nears 60, you can tell that he once was a really buff guy. Turning his back to the falls, Sventek starts telling stories from the time when Minneapolis was the flour-milling capital of the world.

Minneapolis riverfront: Home of the mills
While St. Anthony Falls powered the mills and newly built railroads provided the critical transportation, farms in the fertile Upper Midwest states provided the millers with grain – the lifeblood of the industry. With these benefits of location, Minneapolis surpassed Budapest as the world’s leading flour producer in 1884. For half a century, Minneapolis milled more flour than any other city and became widely known as “the flour milling capital of the world.”

For more than 30 years, Terry Sventek worked in two of those Minneapolis mills, starting right after graduation from high school. Working in the mills was tough, and not only because of the back-breaking manual labour. “In the summer it was 160 degrees up on the sixth floor where I worked,” Sventek says with a grin. “That kept me in good shape, I can tell you!” Obviously, he is still proud of the job he used to do.

The job wasn’t only dirty, it was dangerous. There was an ever-present possibility of fires and explosions caused by flour dust. On May 2, 1878, the Washburn A Mill exploded. Eighteen workers were killed in an inferno on the riverfront. The mill was rebuilt shortly after.

Sventek says: “Fire was one of our biggest fears. Especially at night, when there were only four people in the mill and you had to be afraid of not catching it right away.” He personally experienced two fires. Once, flour exploded just on the other side of a wall near where he was working. “Oh man, that scared me,” Sventek says, and you can still see the fear in his eyes.

After 1915, Minneapolis began to lose its flour-milling sovereignty. The quality and quantity of the region’s spring wheat declined, and waterpower was no longer needed to grind grain. Other locations (especially those closer to population centers on the East Coast) offered better logistical opportunities for the milling industry. In the face of these developments, the Washburn A Mill ground its last flour in 1965. Other mills closed soon after. Only a handful of mills is still running in Minnesota, including the ADM mill in Minneapolis.

Mill City Museum: Where history comes alive
Today, Sventek is one of many volunteers at Minneapolis’ three-year-old Mill City Museum, located amid the ruins of the former Washburn A Mill – at one time the largest flour mill in the world. At peak production, it ground enough flour in one day to make 12 million loaves of bread. The mill had been closed for almost 40 years when the museum opened in this historic setting in 2003.

The Mill City Museum is a state-of-the-art museum providing a multi-sensory, interactive journey for visitors of all ages. There’s a bread-baking lab, a hydropower lab, and exhibits of farm life and food products from the mills. One of the highlights is the “Flour Tower,” where visitors can find out more about life in the mills. Seated in a large freight elevator, groups stop at six different floors, where multimedia shows and vintage machines bring the mill back to life. All over the museum, historical photos and film footage tell the story of flour milling and its impact on Minneapolis, the nation and the world.

Sventek read about the museum in the newspaper and decided that he wanted to share his knowledge of the milling industry. And he really has some stories to tell. You can hear the excitement in his voice when he talks about his first experiences in the mills as a teenager: “When I first started, I had to carry those 100-pound sacks. The first load was 1,000 sacks. The next day, when that first sack hit my shoulder, I thought it was the end of the world because my shoulder was so sore.” And sometimes Sventek “tells [staff members] some earthier stories that you wouldn’t tell our visitors,” says Patrick Pfundstein, the museum’s floor manager, with a big smile on his face.

“We want to give people the chance not just to read about the milling industry, but to get their hands on the topic and to actually experience it,” says Wendy Singer, a supervisor at the museum. This is what visitors seem to like most at the Mill City Museum. Heidi Lee, who came to the museum with her daughter, says: “I am very impressed. This museum is very educational for all ages, and they have all these hands-on attractions. There are so many things you can learn here.”

Since its opening, the Mill City Museum has had between 100,000 and 130,000 visitors a year. Some of them are men and women who used to work in the mills. “We continue to learn from our visitors,” Singer says. “Former workers are often quiet at first, but then they come out with all these interesting stories,” just like Terry Sventek.

The visitors Sventek likes most are the children. “I really like to see the kids,” he says. “They are so interested in my stories, especially the ones about the fire. And they can’t believe that you had to work that hard in those days.”

About 27,000 students make field trips to the Mill City Museum every year, and the museum offers special programs for school groups. Cindy Gregg, one of the museum’s interpreters says: “Each class here at the museum has its own goal. For example, with the ‘Field to Table’ class, we want kids to understand the process of how wheat turns into bread.” Anna Lee, 8, and Bridget Harris, 7, liked the bakery and the Flour Tower best. Bridget says she didn’t know how to bake bread until she visited the museum.

The Mill City Museum isn’t only an adventure for kids; adults can find interesting information there too. Gail Sovell-Kenyon, who is a teacher at Roosevelt High School in Minneapolis, says, “I learned a lot about the history of Minneapolis, and they do a really good job in presenting all the different parts of the milling industry.”

Since 1881, different kinds of wheat – as well as corn and soybeans – have been traded in downtown Minneapolis. The exchange was founded on the increasing demand for commodities in the Minnesota mills and the need for trade in futures contracts (sales of grain made months in advance to protect farmers from declining prices and grain companies from increasing prices).

The overall goal of the Grain Exchange was to develop a centralized marketplace, making supplies more reliable and establishing fair prices. During the daily trading sessions, the trading floor is a beehive of activity with sellers and buyers shouting prices. This is the traditional “open outcry” method still used in the Grain Exchange.

Once Minneapolis was the world’s leading flour producer. Today, it’s known as the “City of Lakes” rather than as the “Mill City.” But for people like Terry Sventek, history is still alive on the riverfront. As he walks by a wall inside the Mill City Museum, he smiles and says: “If you touch the walls, you can still feel the flour on your fingers.”