Have you been to Murray’s? How long have you lived in this town, anyway? Maybe you remember it from the olden days when you went there with your parents, who drank Manhattans and naughtily let you suck on the maraschino cherries. Maybe you went there as a youthful grown-up, bestowing your millennial cool upon the place while only semi-ironically wishing you’d been around in the ‘50s and could smoke cigarettes at your table like Betty and Don. 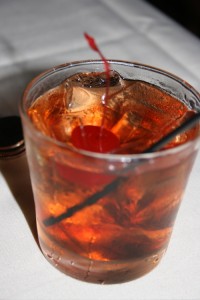 If you’ve never been there at all, either because you didn’t notice it or because it’s harrowingly expensive, you should save up and do whatever you can to get there right now. You must go, because someday someone will say to you, Oh, you lived in Minneapolis! You’re so lucky, because you had Murray’s! And you don’t want to hem and haw.

I’m not implying that Murray’s is in decline. But you know how it is when people turn 65, as Murray’s did this year. You start to treat them more gingerly because you don’t really know how much longer they’ve got. On a recent Tuesday night, the letters “ray’s” were out on the marquis. If they’re still out when you go there, should you worry? 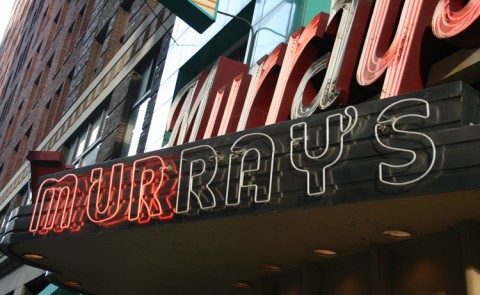 “That sign goes out every time it rains or snows,” sighs Tim Murray, third-generation restaurateur. “It would cost $80,000 to get the whole neon sign re-done, so we just keep fixing it.” It’s so worth it, though. You don’t see signage like that too much anymore, nor a perfect steak in a downtown joint where the retro ambiance isn’t a self-conscious pose.

Bruce and I went there recently because a friend who believed he owed us dinner, having eaten dinner at our house 37 times over the past several years and never having invited us to dinner at his house, not that we’re keeping track, insisted on taking us. Then he insisted on ordering the Silver Butter Knife Steak for Three, which is a 42-ounce sirloin and costs $138, so now we owe him about 20 more dinners. If he then decides to take us to Murray’s again, that will be very good karma. 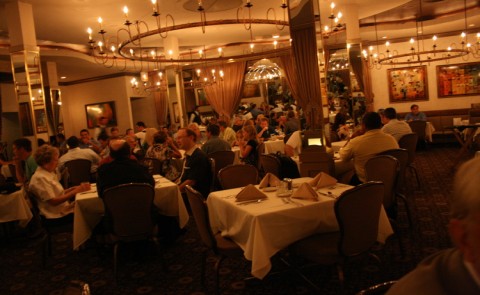 Murray’s doesn’t look much different than it did when Tim’s grandparents, Marie and Art, started the place in 1946, although the decor has changed modestly a couple times. Until recently, pink was a theme. Tim remembers that between 1960 and 1984, the booths were a metallic gold and the drapes were light pink. Then they staged a dramatic facelift: the restaurant was closed for six weeks while they took out the back dining room, enlarged the kitchen and upped the pink theme to the fabulously ubiquitous 80’s mauve.

“Everyone loved the new look in ‘84,” says Tim. “But when we did another decor change in 2006, getting rid of the mauve and going with gold drapes, people were outraged. They said it didn’t look like Murray’s anymore. I just got another complaint about it the other night, and it’s been five years.” You can see that certain Twin Citians may be somewhat dysfunctionally attached to this restaurant, which is, of course, part of its charm. 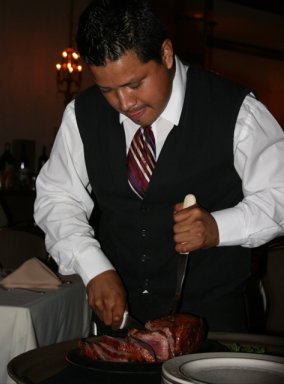 Another change these devotees may have noticed over the years is the look of the waitstaff. In the beginning, the waitresses wore white dresses and hairnets. They were career women, family breadwinners in one of the highest-paying jobs available to women in that misguided era. Sadly, those seemingly immortal waitresses have moved on, but their replacements will console you by being handsome young men with names like Jay or Luis, nattily dressed. It’s only in the past year or so that there are more male than female waitstaff. Marie refused to hire men because they were “too hard to handle,” according to Tim. It wasn’t until gender discrimination became illegal that she caved.

“Marie ran a tight ship,” says her grandson. “She really cared for the staff, though, and they knew it. She was very driven, very ambitious — a typical German woman who wanted things done her way. My grandfather was Irish, so…yes, they fought. Pans were thrown. But they complemented each other. Marie had a terrific flair for seasonings and dressings. Art was a social guy and a great host. It’s hard to be a restaurant couple, but they both had a passion for the business. Maybe the rest of the family isn’t as boisterous as they were, but we’re just as passionate about the restaurant.” 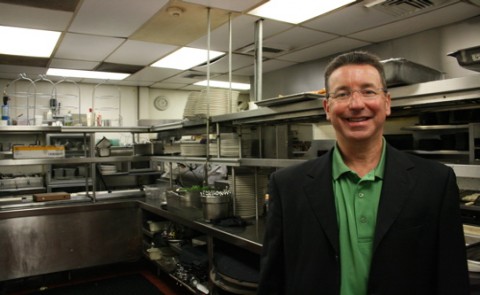 Tim Murray in the family kitchen

If you didn’t grow up in a family business, it’s hard to imagine how that would work. Art and Marie had one son, Pat, who took over Murray’s when they couldn’t do it anymore. (Art died in 1971, Marie in 1984.) Pat ran the restaurant with style and consistency and also grew Art’s other business, Service Ideas, a dining supplies distributor. Pat’s five kids, of whom Tim is the oldest, are all involved in the family businesses. Don’t they get sick of all that togetherness? Apparently not. Each generation is just as into it as the last one.

“It was my grandma who talked to me most about taking over the restaurant,” says Tim, who studied restaurant management at UW-Stout. “Now my brothers and sisters and I are discussing how to work the next generation into the businesses. We want them to have the right attitude, to like being around people, be flexible, be patient. Of course they’ve got to make sure the food is great, but it’s really about the service and the ambiance.” 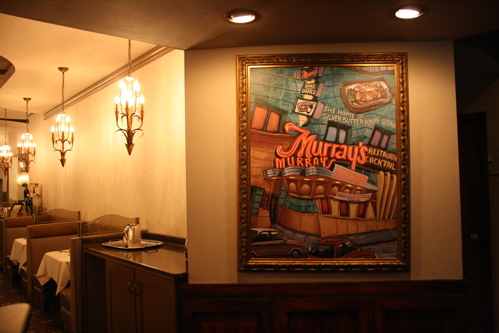 Ah, yes, the ambiance. It’s there in droves, but people don’t necessarily dress for it anymore. Tim didn’t say this, but I think Marie might be turning over in her grave if she could see the outfits people show up in, even on Saturday nights. Marie wouldn’t let a gentleman into the restaurant unless he was wearing a jacket; she kept a stash of them in the back and lent them out to the overly informal. Now people wear shorts, t-shirts, any old thing. Of course, Tim and his brother James will greet the slobs with the same courtesy they use on the properly attired, because that’s part of being a gracious host. But really, people! Look at the wallpaper, the chandeliers! Could you not rustle up a pair of pantyhose for the occasion?

Another change that’s a bit of a challenge for the Murray’s team is that today’s diner is more “educated about the value of a dining experience,” as Tim tactfully puts it. In other words, everybody’s a critic. “Before the internet, if people had a complaint, they would call us,” says Tim. “Now people post nasty reviews online, and some cynics are determined to find something wrong. It used to be considered a privilege to dine here, and now, well, some people…at any rate, it keeps us on our toes,” he concludes cheerfully. 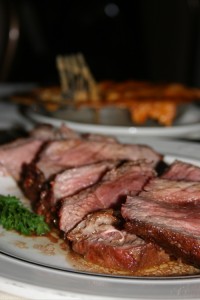 Having received countless rave reviews over the years, the Murray gang doesn’t really have too much to fear from testy bloggers. They’ve won “best steak” awards repeatedly, including  the “Silver Butter Knife” award (prestigious in its time), after which Art and Marie named their centerpiece entree. They’re recommended by the New York Times. Garrison Keillor wrote an article for Time Magazine about Murray’s in 1997. Tim can name dozens of famous people who have hung out there: Humphrey, Mondale (who still shows up every week), Harrison Ford, Tom Hanks, Ruth Gordon, Billy Joel. And of course Sid Hartman has his own booth, labelled.

Our steak dinner was exactly what you’d expect from a vintage steak house. It was perfectly done, tender, flavorful, rare, over the top in every respect, including its humongousness. Unlike most steak houses these days, Murray’s uses 100% Angus beef, cut by their on-site meat cutter, aged 30 days after the butchered steers get from Nebraska or Iowa to Minneapolis.

The Manhattans and martinis were impeccable. The salads were also what you’d expect from a restaurant that pushes steak and potatoes: pleasant but pedestrian. My dinner companions were kind enough to send me home with the leftover steak, and I can tell you that it was just as nice the second day, and the third. 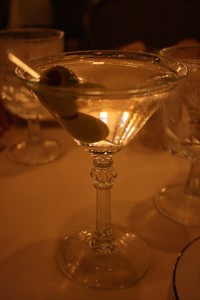 So how is Murray’s’ health, now that it’s old enough to go on Medicare? There was a scare about ten years ago, when Tim and family almost made a deal to move into the then-new 50 South Sixth Street building next door. “It would have given us a bigger dining room, a big bar, a second floor deli. It was a good business opportunity,” says Tim. “But there was a huge outcry. It was the lead story on the Channel 4 news one night, and people were very upset.”

It was finances, not sentiment, that led to the end of that potential deal. Tim says it was a bittersweet decision. It’s not easy maintaining a building that was built in 1886. Time does, indeed, march on. Even Tim acknowledges that Murray’s might not be around forever.

“We’ll be extinct some day,” he admits. “Every year it gets harder to compete with the big chains and their bottomless pockets. If the economy gets really horrible, it’s the hardest on family businesses.

“But we’re not hurting. Some people go in and out of the restaurant business; we’re here for the long haul. It’s our life.”