Mr. Chue Vue is a family man, husband and father. He is an attorney, highly educated community St. Paul community member and volunteer. Mr. Vue interviewed with ease, enthusiasm and intelligence. Immediately, he smiled and lit up when the topics covered were family and education. He delighted in talking about his children and the progress they’ve made attending school in St. Paul. Even though he is a prominent attorney in St. Paul, Minnesota and a graduate of William Mitchell Law School, he’s most enthused about being a father who enjoys being actively involved in his children’s education. Having attended law school, he knows full well that education is key to Hmong families creating professional and working options for their children and their children’s children. Mr. Vue is ready to make another kind of difference. He would like to seek a seat on the St. Paul Public School Board this fall, 2013.

Proud parent of five children whose ages range from 19, 17, twins who are 5 and a 5 month old baby, he’s decided that running for the St. Paul Public School Board is an important first step to addressing issues related multicultural and multiracial diversity. Mr. Vue believes that a seat on the St. Paul Public School board will allow him to contribute as a community member, professional and father. Currently, his children attend Dayton’s Bluff Elementary School in the St. Paul School District. He’s want to ensure that all children receive a well rounded, high standards and quality education. He is ready to advocate for all families and children, especially Asian families and most specifically Hmong families. Along with his wife May Tong Yang, they have worked to integrate themselves into St. Paul’s community in a variety of ways.

Mr. Vue is the co-founder and a senior partner of United Legal Law Firm, LLC. He earned chemistry and philosophy degrees from St. Olaf College and received his Juris Doctor Degree from, William Mitchell College of Law in 2007. In addition, he is active in the Hmong American Bar Association, The Minnesota Bar Association and The Ramsey County Bar Association. He is an integral member of the Family Law Section and Bankruptcy Section of the Minnesota State Bar Association.

Besides a long history of prestigious assignments, Mr. Vue has worked collectively and extensively with The Hmong American Partnership as a chairperson, the development of Hmong National Development, Inc., Lao Hmong American Veterans Coalition, Vue National Association, Inc. and La Crosse Hmong Mutual Assistance Association. He’s volunteered for organizations such as the Volunteer Lawyer’s Network, Southern Minnesota Regional Legal Services, the Court-Appointed Attorney Panel for Ramsey County Family Court, the Upward Bound Program, the Future in Learning Law Program at William Mitchell College of Law and the Office of the Ombudsman for Families in Minnesota. Prior to his legal careers, Mr. Vue was a research chemist for the United States Department of Interior for eleven years.

On top of his impressive resume that boldly highlights extensive education and impressive professional experiences, Mr. Vue has strong core values about educating every child and supporting teachers. He’s passionate about creating a platform for parents to have a voice. He believes that resources need to be allocated using an equitable framework and that increased energy needs to be placed on decreasing class sizes and increasing opportunities for all St. Paul students. Full of ideas and inspirational goals, his enthusiasm to work hard for St. Paul’s community is abundant. 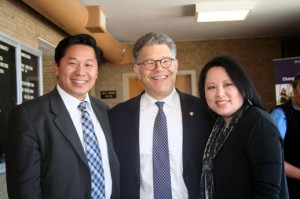 Recently, I met Mr. Vue at the Hmong Laos Community Center, along with Kao Zhua and Senator Al Franken as they commemorated United States Hmong Veterans for their services in the military. I was among many honorable and highly recognized military leaders, civilians and community business entrepreneurs. It was evident that Hmong Minnesotans are paving the way for a better future for their children. Senator Franken thanked Hmong constituents and leaders for their heroism, fortitude and contributions. Mr. Vue hopes that one day, his contribution to lead education into the next century will mean that he is seated on the St. Paul Public School Board in September. Working to pave the way for the next generation, Kaozua Kong-Thao, former chair of the school board in 2008-2009, Vice Chair in 2006-2007 and Treasurer, 2005 stated, “I believe that Chue Vue is the best candidate to represent the St. Paul community on the St. Paul Public School Board.”