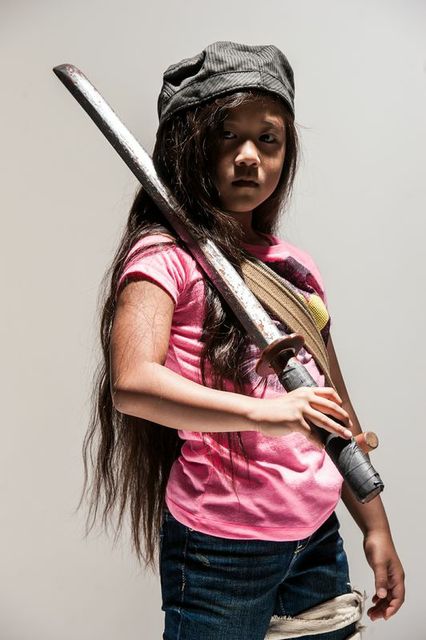 The year is 2025 and over half the world’s population has been ravaged by a deadly virus that has turned the majority of humanity into vicious, mindless automatons. And the worst part about it is… those mother fuckers know Kung Fu.

Okay, I’m just gonna jump right in and say it so I don’t leave you wondering. Kung Fu Zombies vs. Cannibals is AWESOME! I don’t attend theatrical performances very often, but when I do I go in with the same intentions I have with everything else: to have a good time. KFZ is probably one of the most entertaining experiences I’ve had sitting in a theater and I’m pretty sure I was surrounded by people who were having just as much fun as I was.

At its core, KFZ is about Sika, a young Lao American woman who travels back to the homeland of her deceased parents, only to find that it is consumed with dangers from both the past and present. It is a story of self-discovery, grief and perhaps hope in a world where every waking moment is a nightmare. The story has its fair share of camp while still taking itself just seriously enough that the audience is made fully aware of what is at stake. There’s a balance of humor within the story’s heartfelt structure to indicate that while we all know that a world overwrought with zombies, cannibals and martial arts mayhem is silly (and the play knows this, too), there is far more to the story than that. Something that really stuck out to me was KFZ’s pacing. It feels like an extremely short play and yet it covers its storyline appropriately giving each segment just the right amount of exposition. It fills your time instead of wasting it and gives you all of the information you need without rambling or going off on tangents; it indulges without being self-indulgent.

Obviously, a play about Kung Fu zombies has got to have plenty of martial arts in it, and this play certainly presents an exciting physicality and presence. The choreography pumps blood into the story’s big beating heart with staged battles that convey emotion and hilarity in a way that moves the story forward creatively. And if the choreography is pumping the heart’s blood, then the music is its rhythmic beat. It’s a fantastic mesh of hip-hop and the soundtrack from a spaghetti western with noticeable Asian influences. Once you hear it you won’t be able to imagine your iPod without it (and I’m honored that I was chosen to design the album cover).

Clearly, I’m gushing and have been for weeks now, but after finally getting to see it I’m happy to report that KFZ was worth the wait. It overflows with energy from start to finish and if you’re willing to go along for the ride I promise it won’t disappoint you.

Coverage of issues and events that affect Central Corridor neighborhoods and communities is funded in part by a grant from Central Corridor Funders Collaborative. Reporting for this article also supported in part by Bush Foundation.
CORRECTION 10/25: The play is set in the year 2025, not 2525.