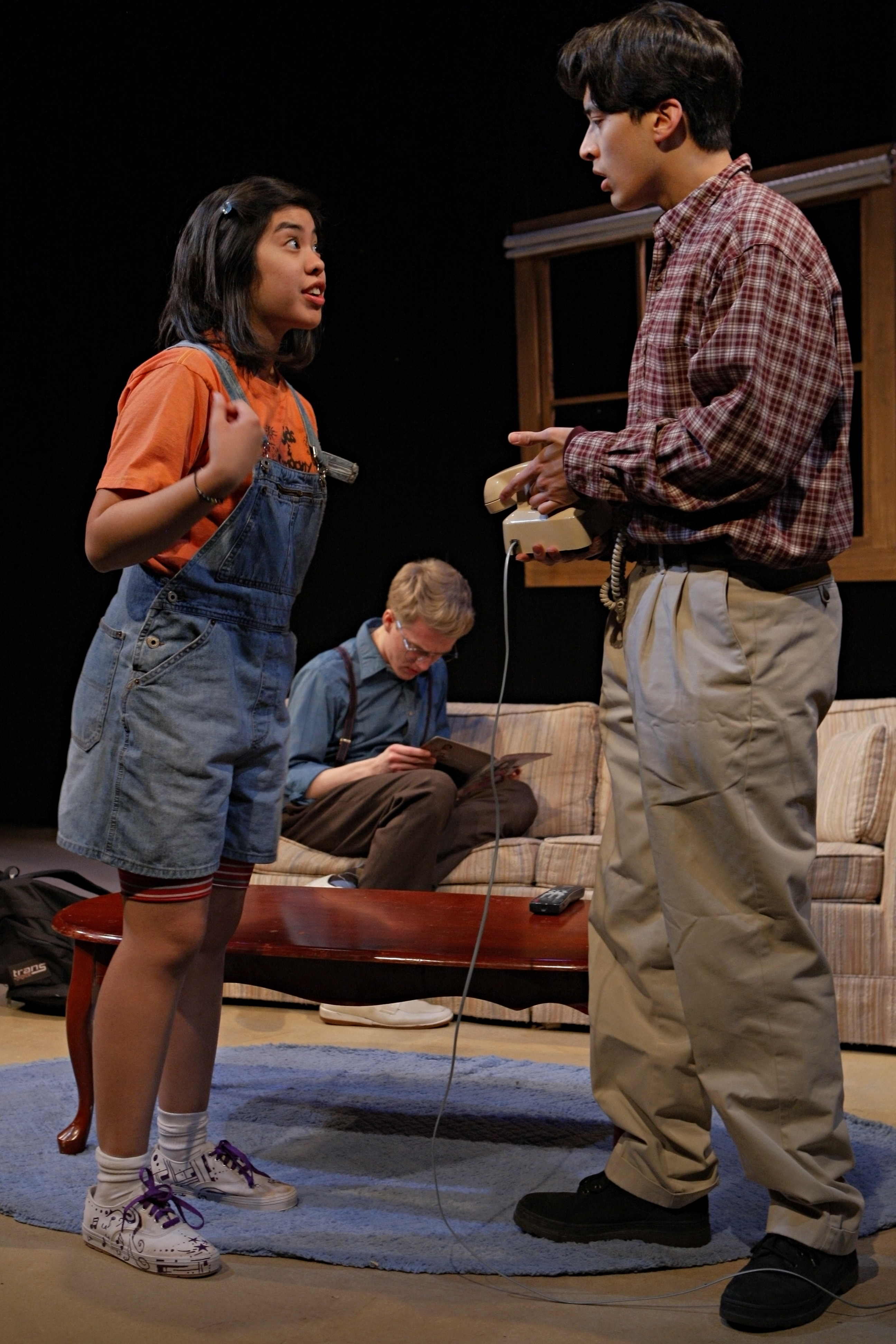 Isabella Dawis as Edith, Matthew Cerar as Benji, Alex Galick as Kenny in Edith Can Shoot Things And Hit Them, courtesy of Mu Performing Arts

Actually, it’s been hard for me to parse out exactly where the credit lies for this Mu Performing Arts’ production. Because the three actors (Matthew Cerar, Isabella Dawis, and Alex Galick) wouldn’t have achieved the kind of subtlety and sweetness that they do without Randy Reyes in the director’s chair. Reyes couldn’t have built this show without the raw material playwright A. Rey Pamatmat gives him with his meaty script. Pamatmat’s story and characters shine because of the work Cerar, Dawis and Galick put in here. The whole enterprise just keeps circling back in on itself. Collectively, all the elements of the production make each individual’s work look that much better.

“You’re such a nerd. You’ve tried to seduce me with dictionary definitions, Filipino history, and differential calculus.”

The year is 1992. Bush (#1) and Clinton (Bill) are running against one another for President. People listen to cassettes on their walkmans and compose mix tapes for the people they care about. Cordless phones (forerunners of today’s cell phones) are enormous, only make phone calls, and don’t leave home  Computers? The Internet? They haven’t quite devoured the national consciousness yet. Certainly not in small town middle America where our characters live.

Edith (Dawis) is 12, her brother Kenny (Galick) only 16. But these two young people have been set adrift to survive largely on their own on a non-functioning piece of farmland. Mom is dead. Dad (never seen) is more absent than present, building a life with his new girlfriend, checking in (unheard) over the phone, and depositing money in the bank (when he remembers) off of which his children find a way to live.

Kenny is managing the logistics of making sure there’s food in the house and that school and activities like choir remain front and center. But sometimes there isn’t enough money to keep sufficient gas in the car. So they have to walk.

“I took what you left us and I made a home.”

Other than Kenny, Edith’s main companion is a stuffed animal frog with whom she holds epic conversations. She also takes the frog out on patrol, honing her marksmanship with her BB gun and guarding the perimeter to keep their home safe.

“Mom’s dead, Kenny.  You can’t whip her out every time you want me to feel better.”

Kenny has an advantage over his sister because his other main companion is quite human. Kenny’s friendship with Benji (Cerar) quickly evolves into sexual experimentation and ultimately romance. But two gay boys in the early 1990s in the midwest have a steeper hill to climb than most gay kids today. Ellen DeGeneres, Will & Grace, and Queer As Folk are still a minimum of five years in the future. If you told someone in Kenny and Benji’s world about those TV shows, no one would believe you. Two gay TV networks? “It Gets Better?” 10 to 20 years away. Role models are all but non-existent. These kids are on their own.

“You know what makes you a man? Taking it up the butt. Because if you can do that, you can do anything.”

All of which might make this sound pretty bleak. But Edith Can Shoot Things And Hit Them is instead incredibly funny and awkward and sweet. Even in the most dire of circumstances, the strong bonds between brother and sister, and boyfriends, remain unshakeable. Each of them saves the other in ways large and small, countless times over. Edith is a hopeful fable about surviving childhood and finding yourself in the process.

“Now I’m stuck here, alone, on this planet as a test.”

The actors are all equally good, though Isabella Dawis as Edith may have the toughest task of the three.  The script does a good job of straddling that line of making Edith mature beyond her years in some respects, and yet still very much a twelve year old girl the rest of the time.  The role is essentially a high wire act, and Dawis has to perform about half of it talking to a stuffed animal. A measure of how successful she is comes when she plots her escape from the boarding school where she’s been sent as punishment. She recounts her plot to the stuffed frog, they have a falling out, she sets the frog down and turns her back on it. Props designer Sarah Salisbury found one very whimsical frog to be Dawis’ scene partner. Because Dawis has imbued her sidekick with personality in their one-sided conversations, that frog perched on the edge of the stage almost threatens to steal the scene, just by sitting there. Director Reyes and his actor know just how long to let that awkward moment breathe for maximum comic impact.

“My mom. She goes through my stuff. And stuff that she misses, my brother tells her.”

Matthew Cerar’s big moment as Benji is among the most giddy and joyful (and funny) of the whole evening. Unlike Kenny and Edith, Benji’s parents are all too present, Benji’s mom in particular. Benji’s mom constantly searches through his things, and watches him like a hawk. The audience never sees her, but Benji’s tales of his mother make her presence, and the threat of her, keenly felt. It’s a trick the script couldn’t pull off without Cerar’s investment in his unseen family. In one of Benji’s few moments of privacy, he composes a note expressing his feelings to Kenny while listening to “Faith,” George Michael’s perky anthem to love (and sex). Zachary Humes’ clever sound design uses the song to take us into the scene, then reduces it to Benji’s headphones, then Cerar takes over the singing for a while. Cerar gets more and more caught up in his feelings and the tune, and when the song returns at full volume Benji gets an enthusiastic dance break that only a teenager in love could perform. It’s a delightful scene, as funny as it is charming. (Side note: I’m not sure whether this is a nod to Salisbury’s props again or Mina Kinukawa’s set design, but the poster of Lloyd Dobler holding the boombox over his head from Say Anything tells us in one image everything we need to know about the time period, and Benji as a hopeless romantic.  Well-played.)

“I just want to sit and be scared and have things be OK.”

Since Kenny spends most of his time navigating his tangled relationships with his sister and his boyfriend, it’s not surprising that one of Alex Galick’s best scenes happens alongside one of his castmates. Driving back from Edith’s choir concert, their first official date, Kenny and Benji have a wide-ranging conversation covering the many plates that overloaded Kenny is trying to keep spinning in his life. Kenny’s struggle to be the man of the family is at odds with his desire to just relax and be a kid for a change. This also makes it hard at times for him to accept any comfort, or even affection, from Benji. Kenny’s affection for Benji, and Benji’s persistence, wears Kenny down on the car ride home. Galick makes it look easy as he takes his character from moments where he tries to be strong and in control, to enjoying simple moments of silence and connection with the person he loves. When they pull into the driveway at Benji’s house, the spell is broken. There will be no goodnight kiss. Benji’s mother is watching. Galick puts on Kenny’s adult mask once more, trying to be stoic as Benji leaves him alone in the car without a proper goodbye.

“It’s like you’re a prostitute.”
“If I do [give you a hand job], it’s because I want to, not because I’m a hooker.”
“Whatever you have to tell yourself, whore.”

Running underneath the performances of both Cerar and Galick at all times is the struggle to figure out what it means to be a man, even if you’re not a man yet. Also, what does it mean to be a man falling in love with another man, particularly when you have no men who have traveled this path before you to act as your guide? When you’re surrounded by Hollywood’s heterosexual barrage of romantic comedies, the tiniest mention in a comic book, or actual words in a dictionary that describe who you are and what you do are a lifeline. And another person who feels the same way is a form of salvation. None of these things is ever spoken of directly, but it seems to bubble up behind the actors’ eyes and underneath their skin. It’s a great example of how a committed actor (with help from a strong script and a good director) can live inside a role.

“You’re not a parent.  You’re an interruption.”

The script, and the production, sometimes feel like they’re straining to keep all the other characters who populate the world of Kenny and Edith and Benji firmly offstage. For the most part, the actors keep that storytelling stress from showing. I don’t know how you’d solve this problem. Most of the time, I don’t have any great desire to actually see the characters who the actors talk about. Cerar, Dawis and Galick all make these other people (the unseen family members, the other schoolmates and friends and their extended families) seem quite real.  The script gives the actors the gift of speeches with just the right amount of detail (and plenty of humor) to make us feel like we know what’s going on in the outside world of this story. It rarely feels clunky or expository, but rather often quite entertaining. However, there are moments when keeping all the unseen people straight can feel a little overwhelming as an audience member. Thankfully these are few and far between.

“It’s the first lie I ever told Edith.”

The script also seems more preoccupied with character than plot. Nothing wrong with that, when the characters are engaging. And here, Edith, Kenny and Benji certainly qualify. But there’s a long stretch of the first act where the characters are all just hanging out together in different combinations. Little things happen, even wonderful little things happen, but it doesn’t feel like anything is driving the story forward. We live inside the basic situation, which shows no signs of changing. The audience could be forgiven for wondering, “Where is this going?” The success of Edith rests for a while on the notion that these are intriguing characters and we should just relax and spend time with them, not letting silly things like plot worry us. Again, the three actors are a blessing for this script. Under Reyes’ direction, the cast gives the words and unspoken moments between them real weight and humanity. When you have to wait as an audience member for something to “happen,” you’re willing to do so. Your patience will be rewarded.

“Everyone will have a mom and a dad there, so I’ll have a you and a Benji.”

Edith Can Shoot Things And Hit Them is an ode to fractured families that stumble along as best they can, and a valentine to puppy love (even if, perhaps especially because, the love blossoms between two unlikely young men). Mu Performing Arts is offering up the special gift of a strong new play to the theater community in general, and the gay community in particular. Spring has arrived early onstage, as well as in the real world outside the theater. Hanging out with Edith and Kenny and Benji is like breathing fresh air after being cooped up indoors all winter. Go enjoy the fun for yourself.