An Expression of Japanese Culture

Do you like music? What if music had no melody or harmony and solely relies on rhythm alone to communicate subtle nuances and deep emotions? If that sounds intriguing to you, you may want to consider attending one of the upcoming performances of Minnesota’s premier taiko drumming ensemble.

Mu Daiko’s musicians will be pounding their drums with precision and showcasing their talent in a special weekend of performances February 9 through 12 at the Ordway Music Theater. The group is celebrating its fifteenth anniversary with special concerts.

Iris Shiraishi, Artistic Director of the Mu Performing Arts Center’s Mu Daiko Programs, believes the art form is a wonderful way to embrace Japanese culture.  “Taiko is a significant expression within the Twin Cities Asian American community. For any Asian American player and women in particular, performing, teaching and breaking stereotypes helps build bridges of all kinds between the artists and audiences alike.”

While the first weekend of performances focuses on local MuDaiko, the second weekend will feature special guest appearances from Hanayui from KODO, Tiffany Tamaribuchi and Megan Chao Smith. Hanayui is a group that features three top female artists in dance, drumming and song. Tamaribuchi is the 2002 Grand Champion of the All Japan Odaiko Contest and Smith is one of a handful of Americans that performs taiko professionally. Yoshikazu Fujimoto, another taiko great, will also take the stage.

After the Ordway performances the special guests and Mu Daiko will travel the state and perform in Fergus Falls, Red Wing, Grand Marais and Grand Rapids as part of a grant funded tour.

A special community forum will also be held in conjunction with Mu Daiko’s anniversary concerts. Co-sponsored by St. Catherine University, a panel discussion will be held on January 29 and focus on Women in the Arts. Organizers say given that Mu Performing Arts and many of its programs are lead by women, it’s only fitting that the topic is addressed. 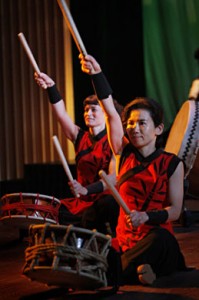 Shiraishi urges the public to attend both the forum and concerts. She believes the performances can be an important history lesson for all ages. Taiko drumming goes back in Japanese history as early as 2500 B.C., when ceramic drums were discovered, but the direct ancestor of modern taiko came to Japan from China around 700 A.D.

Taiko really took off in North America after Japanese Americans began to re-examine their culture after World War Two. After being freed from internment camps, many of these Asian Americans wanted to celebrate their unique culture. Taiko became a symbol of cultural pride. Today there are more than 150 performing groups across North America.

There are currently seven members and three interns who perform for Mu Daiko. All spend countless hours in practice and rehearsals. Shiraishi says for those who perform, the art of taiko requires discipline. “Passion, focus, drive and a high level of physical fitness are just as important as the required musical attributes. It’s said that it takes at least 20 years of study and practice before one can call oneself a taiko player.”

Needless to say, all the members of Mu Daiko take that to heart.

If you are interested in attending one of the performances, call the Ordway Center box office at 651-224-4222 or visit www.muperformingarts.org.