Soul of the Drum

The Mu Daiko taiko ensemble makes its way to the Ordway’s McKnight Theater for the first time in Mu Performing Arts’ upcoming production Soul of the Drum from June 15 – 26, 2011, featuring six premiere works in the first weekend of performances alone.

In Mu Daiko’s tradition of collaboration and innovation the performance will include guest artist Kaoru Watanabe, formerly of the internationally renowned taiko troupe Kodo, and others for the second weekend. Soul of the Drum will blend Japanese traditional with contemporary American influences.

“We know of his past experience but have never played with his group,” said Mu Daiko Artistic Director Iris Shiraishi about Watanabe, who will also offer taiko and music workshops for performers to share his knowledge of American music and his unique training with Kodo.

For the June 15-19 performances, Soul of the Drum will feature fan favorites with new pieces from Mu Daiko composers that range from melodies of Okinawa, to the rhythms of Hachijo Island, and the strenuous North American taiko movement. The new pieces include guest performers, Japanese American vocalist Momoko Tanno and Megan Chao Smith.

Three of the new works will feature the odaiko, a three-foot-wide drum with an intense vibration that audiences can literally feel.

Chao Smith is a North American taiko drummer formerly of Shidara in Japan, and presents a new piece premiered by Heather Jache called Mizu No Nagara that will use five small drums.

Rick Shiomi, Artistic Director of Mu Performing Arts, said Chao Smith brings a rigorous and grueling training regimen to Mu Daiko since relocating to the Twin Cities. He said the “going back to the basics” method has helped the performers more in unison together.

Shiomi said Chao Smith comes from a sort of “boot camp” school that trained seven days a week for up to twelve hours at a time.

“We have had the benefit of her training,” said Shiomi. “Her specialty is on the Odaiko and the Katusgi drums, and she is contributing three pieces to programming this year.”

During the second weekend of performances from June 23 – 25, Mu Daiko shares the stage with the Kaoru Watanabe Ensemble. A former member and artistic director of Japan’s world-famous Kodo, Watanabe’s group of international artists has a tailored program for Soul of the Drum that draws on influences from traditional Japanese Kabuki and Noh theater, jazz, contemporary dance, and world music.

“This is one of the more adventurous program we have together so far,” said Shiraishi.

Shiomi described Watanabe as new age fusion taiko along with music performance art from other forms including a tap dancer to add another element of movement in addition to the music.

“It is quite an unusual mixture,” Shiomi added.

Mu Daiko has used lighting design to enhance the performance for years. However, this will be the first time that they will build a background set for a show from set designer Mina Kinukawa. He said it has a new age Japanese look that is a “lovely kind of visual dreaming.”

“It’s going to be an exciting and new design concept for us,” he said. “We are treating it like a theater production.”

The McKnight offers the performers confidence that their work will draw both existing taiko fans and Ordway patrons that will hear them for the first time. Shiomi said the chance came after James A. Rocco, Ordway’s VP of theatrical programming and producing artistic director, saw Mu Daiko perform at a Haitian relief event and said it would be a good fit for the McKnight.

“Over the past few years, the Ordway has enjoyed a wonderful community partnership with Mu Performing Arts,” says Rocco. “We’re excited to have the showstopping Mu Daiko on the McKnight stage.”

Mu Daiko will celebrate its 15th Anniversary with a Minnesota tour to start at the McKnight Theatre in February 2012.

“It is always a pleasure to welcome Mu Performing Arts to the McKnight stage, and we are delighted that they will be bringing us the exciting performances of Mu Daiko this season,” says Patricia A. Mitchell, Ordway president and CEO.

Shiomi formed Mu Daiko in 1996, and its core group of drummers, new performers and students have nurtured it into a top American professional taiko ensemble. Mu Daiko has a core group of performers along with apprentice and student performers. The students that advance are able to grasp taiko with a workable musical sensibility and demonstrated dance movement. The third element, Shiomi said, is the martial arts influence that is exhibited with powerful drumming technique. 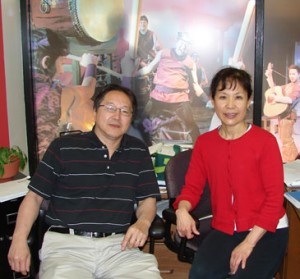 Shiomi will retire as artistic director Mu Daiko this June and focus his efforts on Mu Performing Arts. Shiraishi will take over the director role.

“I will play on occasion for outreach events as needed but I will no longer perform in mainstage productions,” Shiomi said.

Shiraishi is the kind of performer that trains on average six days a week for several hours. Shiomi said she is a natural leader, performer and composer who displays the type of enthusiasm for taiko that reaches performers and audience alike.

Her duties include leading taiko classes for around 80 adult students and arranging for educational exhibition performances in schools and community events.  The classes teach reverence for the drum. The craftsmanship, all natural materials, and handmade invoke elements of nature and the sounds offer a personal connection that is felt by the body.

Shiraishi will move the organization forward, he added, noting that she also has a doctorate in Music from the University of Minnesota.

She is motivated by the reaction of youth and adults that are visibly moved by performance. They often approach her after the performance to ask about how to learn taiko.

This will be Shiraishi’s first production as director and she said it’s the same in most ways but different in the awareness of a responsibility to give the audience the intended experience, challenge the performers, and push the envelope of the art form forward while staying true to the tradition.

“It’s a great group of people who are ready to jump in and try to do whatever it takes to push the art form and step up to the plate,” Shiraishi said.

Soul of the Drum performances run Thursdays through Sundays, June 16 – 26; with a special family show Saturday, June 18 at 2:00 p.m. A post-show discussion will follow performance on June 19. Tickets are $22 – $29 and available through the Ordway at 651-224-4222 and online at www.ordway.org or www.muperformingarts.org.