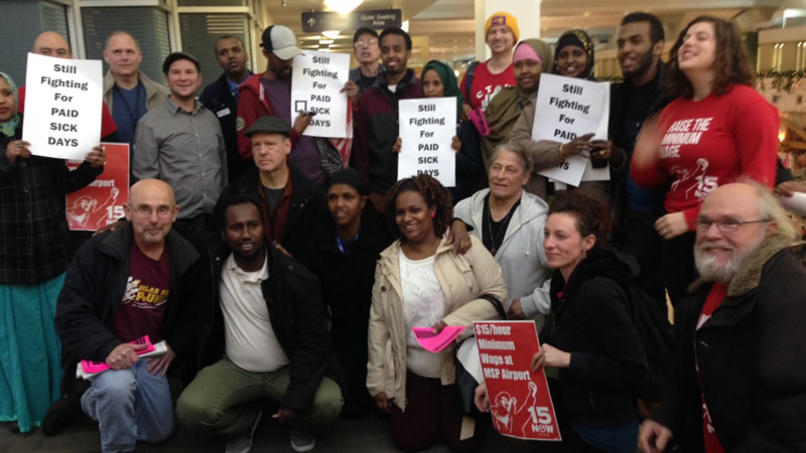 Workers at Minneapolis-St. Paul International Airport will qualify for paid sick leave under a new policy adopted Monday by the Metropolitan Airports Commission. The decision is being hailed as a groundbreaking move that will benefit thousands of workers.

“This is a big step forward for workers at the airport,” said Ahmed Ahmed, a wheelchair agent for Air Serv, who addressed commissioners before the vote.

The policy, passed unanimously, will take effect Jan. 1, 2015, for employers with 21 or more employees. The provisions will be applied to airport businesses as license agreements with them are entered into or renewed.

Covered employees include cabin cleaners, car drivers and wheelchair agents. The policy does not apply to the airlines, but may cover a subsidiary or affiliate of an airline.

Commission Chair Dan Boivin said the new policy will benefit not only workers and their families, but also the traveling public who will not be exposed to people who have to work while they are sick.

Many airport workers are employed by outside vendors that currently do not provide paid sick leave or other benefits.

“If all the employees at the airport were allowed collective bargaining rights, we wouldn’t have to deal with this issue ourselves,” noted Commissioner Erica Prosser.

Commissioner Carl Crimmins raised questions about a provision of the policy that leaves it up to the employer to decide whether to pay for any unused sick leave when an employee leaves. “If you’ve earned a benefit, it should be due you at termination time,” he said.

While approving the sick leave policy, the commission said it would conduct further research on the payment provision to see if it needs to be changed.