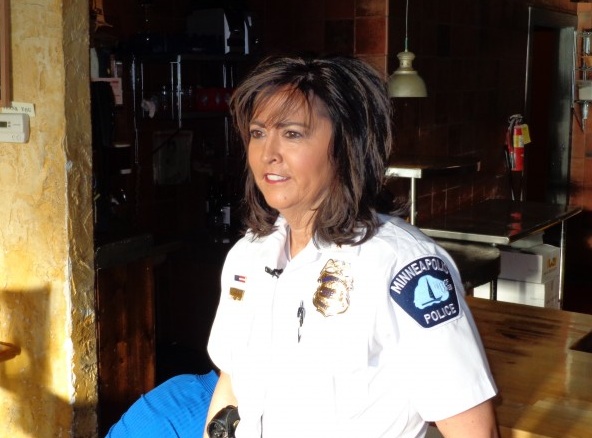 Minneapolis Police Chief Janee Harteau says she wants a “values-driven department,” which includes improving relations and restoring trust and integrity. Commitment, integrity and transparency are three things Harteau says she has emphasized in department-wide meetings since taking over last December.

“We have many values in this department, but the key ones are those three things,” noted the city’s first female police chief, a 26-year veteran police officer who joined the force in 1987.

“I’m getting out in the community as much as I can,” said Harteau last week at a regularly scheduled monthly community meeting held by City Council Member Elizabeth Glidden at Turtle Bread in South Minneapolis. “We all want respect, and I am here trying to earn your respect.

“Where I like to see us improve is in service,” continued Harteau. “The guiding principle that I ask of every officer each day, whatever encounter they have, no matter how big or how small, [I] ask [that they ask themselves] one simple question: “Did my actions in that moment reflect how I would want a member of my family [to] be treated?”

Now nearly six months into her tenure as chief, Harteau said last week that her overall goal is “not to over-police but overprotect,” and she wants her officers to get out more. “We have to reach out and make these face-to-face connections. We are human beings [too],” she said, adding that she wants a “culture of accountability” in MPD but warns that it might take three to five years to see “significant culture change.”

The MSR asked Harteau of her plans to help improve relations among the city’s Black citizens. “I go to as many places as I can — I was just at the Urban League and UROC,” she said.

During her 90-minute appearance, Harteau also took many questions from the overflow audience, mostly centered on MPD’s overall image. The chief noted she supports “appropriate discipline” whenever police officers are found misbehaving.

“We need to train our cops,” she pointed out. “If we train our officers, we will have better outcomes across the board.”

Participant Sam Cooke asked the chief if she will enlist community organizations to help recruit more officers of color and do culturally specific training for existing officers. “I think we need to have that conversation,” responded Harteau.

“As long as that door is open to discuss it, I did appreciate that,” said Cooke afterwards. “She is open to those dialogues, and I would challenge those in the community” to pursue this with the chief, he suggests.

Harteau also pledged to work with faith-based and other community-based groups, adding that a “citizen advisory council” has been formed. “They are a working group from all sections of Minneapolis,” she explained. “They are going to be for me a group that helps build strategy on how do we build public trust.”

When asked if any members of this council are Black or other persons of color, Harteau identified Shiloh Temple Pastor Bishop Richard Howell as a member and added, “All ethnicities, including Somalis, Latinos and Native Americans [and] women” are represented.

She also mentioned, “I am very encouraged about [an] effective civilian review process” in place.

Harteau announced that she is looking for “a whole new breed of officer…to change the face of the police department. I want diversity from all ends: in ethnicity, age, and in the way you think,” she said. As a result, community service officers will be hired. These persons must be high school graduates and able to pass a background check, and will be able to do many police functions but will not be authorized to make arrests.

“We are having an opportunity to get people from the community,” said Harteau.

After her appearance, the MPD chief told the MSR she was “not shocked by the questions. I get disappointed when I hear certain things because I know that the majority of the work that gets done by our officers is absolutely professional. You can’t fix things because they’re old, and I need to find ways to move forward.

“I really look forward to opportunities to find ways of improving and building relationships and say the past is the past,” said Harteau.