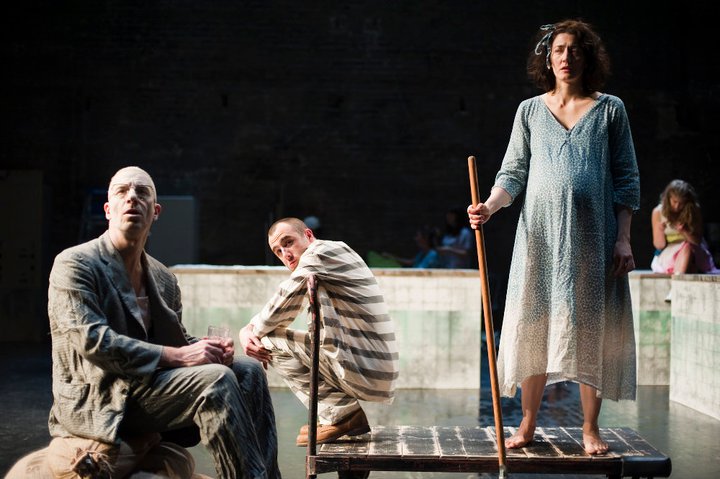 I keep trying to make excuses for the MovingCompany’s current production of Come Hell and High Water. After all, this company is the living remains of the former Twin Cities behemoth Theatre de la Jeune Lune (Dominique Serrand, Steve Epp, Sonya Berlovitz, and Nathan Keepers, to name just a few). Everyone loves a good phoenix-rising-from-the-ashes story.

Add to that, Come Hell and High Water (no, that’s not a typo) is inspired by and adapted from the William Faulkner novella Old Man. The whole event is sprawled across the stage and vast stone proscenium arch of the Southern Theater (see above: phoenix, ashes). The production’s got a pedigree a mile long on all sides, and oodles of rooting value. There’s some stunning physical theater work, and some vivid stage pictures sprinkled throughout. Heck, it even rains indoors.

But if I’m honest, it didn’t grab me. When it was over, while some other audience members were so transported by the whole affair that they stood to applaud, I sat there thinking something that the main character had uttered earlier in the evening.

Why did my attention wander? Why did the production feel so much longer than its 90-minute run time? Why did so much of what was going on in front of me seem entirely unnecessary?

An old man (Steve Epp) wanders onstage and tells the tale of himself in younger days (Nathan Keepers) running afoul of the law again and again because, well, he’s just not a very effective small-time criminal. When the great Mississippi River flood of 1927 comes during the time of his first incarceration, the warden (Corey Hinkle) sends the young convict on a mission. He is to take a boat to rescue a young, pregnant woman (Christian Baldwin, later Adia Morris) trying to escape the floodwaters in the high branches of a tree. Along the way, the convict also rescues and befriends a deer (Katelyn Skelley). Then when the flood waters recede, he’s back in trouble again, only gaining his release in 2005, just as Hurricane Katrina is about to hit. (Time is as fluid as the water that runs through every part of this story. Just roll with it. He’s an admittedly very old prisoner. That isn’t my quarrel with Come Hell and High Water.)

For a minute or two I started thinking, “Well, maybe this just isn’t my kind of theater.” But that’s not it. Some of the most thrilling theater I’ve seen in the last couple of years is exactly this kind of theater: Theatre Novi Most’s The Oldest Story In The World or Live Action Set’s 7-Shot Symphony or Off-Leash Area’s Ivan The Drunk and His Terrible Tale of Woe, just for starters. I’ll grant you that physical, company-created theater doesn’t always hit it out of the park. For every Ivan, there’s occasionally a Now Eye See You, Now Eye Don’t; and much as I loved Sandbox Theatre’s War of the Newts and .faust, they also gave us The Horse, The Bird, The Monkey and The Dancer. But this kind of theater, when all the elements are working in unison, can really deliver on spectacle and theatricality and just good old theater magic on a level that a lot of traditionally scripted drama can’t reach.

However, in Come Hell and High Water, the parts are not adding up to a greater whole. Which is a shame, because there are some pretty dazzling parts that pop up in the course of those 90 minutes. The things that stick with me:

• Steve Epp dousing his face in water and then, rather than drying his face, applying a washcloth to it which is covered in an ash-like substance, coating his visage in a gray mask.

• The same gray mask being washed away by water that falls from the rafters at the end of the production.

• Keepers standing and Baldwin lying down on opposite ends of a long plank of wood pivoting like a gentle seesaw atop a mound of sandbags.

• The reveal that her character is pregnant in the first place when she begins to climb down from her tree.

• The brilliantly orchestrated moment where, in the middle of a sentence, Baldwin disappears and Adia Morris assumes her place, and her character, and finishes the sentence without skipping a beat. Even though I know it was just a skillful ducking down and popping up, the execution made it look like magic.

There are also, though, things that mystify and rankle me.

With one exception, everything listed above is incredibly simple—yet the bulk of the story is weighted down with so many bits of scenery and props and even people that aren’t put to adequate use that I repeatedly wondered why they were there. In addition to the actors listed in the story synopsis, there is a chorus of 13 people (Emily Dussault, Tessa Flynn, Parker Genne, Daniel Joeck, Peter Middlecamp, Katherine Moeller, Hope Nordquist, Paul Rutledge, Tony Sarnicki, Esau Sponslier, Michael Sung-Ho, Eve Tugwell, and Shante Zenith) plus a guitar player (Per Halaas). Now, if every one of those people had something significant to do that moved the story along or enlarged the world of the play, fine. A few of them get a moment or two here and there that’s more than just a line thrown at the narrator to keep the story moving. But most of them are just around to sing and move stuff. I’m sure they are supposed to represent the great varied mass of humanity, but the use of them is so unfocused and the Southern’s stage so vast that the actual effect is just scattered batches of people looking very small: people being used as props and scenery rather than as human beings. Is there a place for that in theater? Sure—but I don’t think it helped this story at all.

There’s a lot of singing by the masses. It’s all pleasant, but a little goes a long way. When the story stops dead every five minutes for another musical number, sung mostly by people who aren’t allowed to be characters, the device starts to lose its resonance. One well-chosen, well-placed song sung by Baldwin, in character, carries the production a lot further than a host of songs sung by people who don’t really have any impact on the story.

When you have something as elegant in its simplicity as that plank balanced on a pile of sandbags, do you really need three kitchen counters, three mattresses, three banks of metal lockers, a couple dozen other wooden planks, and a couple dozen cinder blocks littering the stage? I’d argue for no.

The sound of plastic rain slickers, coupled with the sound of an enormous sheet of plastic pulled out to cover the stage, gives you the sound of rain falling. Did a series of sprinklers dumping actual water onto the stage really augment or elevate that effect? Again, I’d argue “no.” (And this is coming from someone who never minds seeing actors get wet.) When Steve Epp tips over a glass of water on the floor, or someone swirls a wet mop on the stage, or someone else splashes in a small bin of water, we get it. It’s far more evocative for its restraint. You don’t need to actually try and unleash the flood. Let the audience do a little work, meet you halfway. Engage rather than engorge. Tell me a compelling story and you don’t need to distract me.

Speaking of distracting, why do we have three narrators, two of whom are the same person? Both Epp and Keepers are accomplished chameleons onstage (I saw Keepers play almost two dozen people all by himself only six months ago). Both these men can play both young and old. Both these men can switch stage personas on a dime. Nothing in the story, and hardly anything in the staging, required there to be two people. If there was some key visual or storytelling moment that occurred when the young and the old man side by side or interwoven into each other’s narratives really exploded the story or staging in some new direction, then I’d be on board with it. I’m happy they both have something to do, but right now, like their baker’s dozen of a chorus, both men feel underutilized in a situation were just one of them carrying the load might have been allowed to really shine.

Also, the production seems to be attempting to make statements about race and class and how in times of crisis some people shine while others get petty, and sacrificing your fellow human beings to survive becomes somehow an acceptable strategy. All of this is meaty material, but none of it really lands with any force. This may be partly because, despite the mass of human beings onstage, there aren’t really that many human characters that are allowed to follow through. It’s hard to build up feeling for ciphers—to feel sympathy or be outraged on their behalf. Maybe if Epp or Keepers had been allowed to be a completely different person. I’ve seen several members of that chorus take hold of the stage and audience in other productions. They’d also have been up to the task. Right now it all seems a bit vague and, again, unfocused.

It might be nice for the MovingCompany to try entering a process with the idea that less is more. Do more with less. Focus. Edit. Right now, more is just…less.

But hey, they’ve got one more Tony Award and two more theater companies than I have, so who am I, right? I’m their audience. And I’d like to be a fan, and a cheerleader. Come Hell and High Water isn’t going to get me there. Maybe next time. I know they have it in them. They’re the granddaddy of physical theater in this town. The Sandboxes and 15 Heads and Live Action Sets and Off-Leash Areas and Theatre Novi Mosts—this is part of the tradition from which they all spring. As an audience member, have a lot to thank the MovingCompany for. I’ll hope the next production is one of those things, too.