Workers from Minnesota Commercial Railway load wet quarry sand into railcars Monday at the railway’s train yard in St. Paul. The sand will be transported to Texas where it will be used to make frac sand. (Photo by Blake Leigh)

Residents were concerned the transport of uncovered sand could lead to lung diseases like silicosis, caused by breathing in silica particles, which are commonly associated with the mining and construction industries.

Representatives from Burlington Northern Santa Fe Railway Company  and Minnesota Commercial Railway,  however, said the sand hauled through local neighborhoods is not frac sand but actually silica sand, which does not need to be covered.

Frac sand is a processed version of silica sand.  It is used in the process of hydraulic fracturing, a method of well stimulation utilized by the oil and gas industry to extract underground resources.

BNSF representatives said the sand coming through Minnesota is being shipped to Texas, where it will be processed into frac sand.

“The bottom line is that simply there is no health threat or health risk posed by the handling of this material,” Brian Sweeney, the regional assistant vice president of government affairs at BNSF, said.

Both companies explained the sand being transported is not harmful to residents because of its particle size.

Dave Gutterud,  director of operations at Indoor Environment Group Inc., said dust smaller than five micrometers in diameter — including portions of silica — is considered too respirable and could theoretically pose a health threat  because it could be inhaled.

“From what we tested, 99.6 percent of the particles in that sand are above what we consider to be respirable,” Gutterud said. 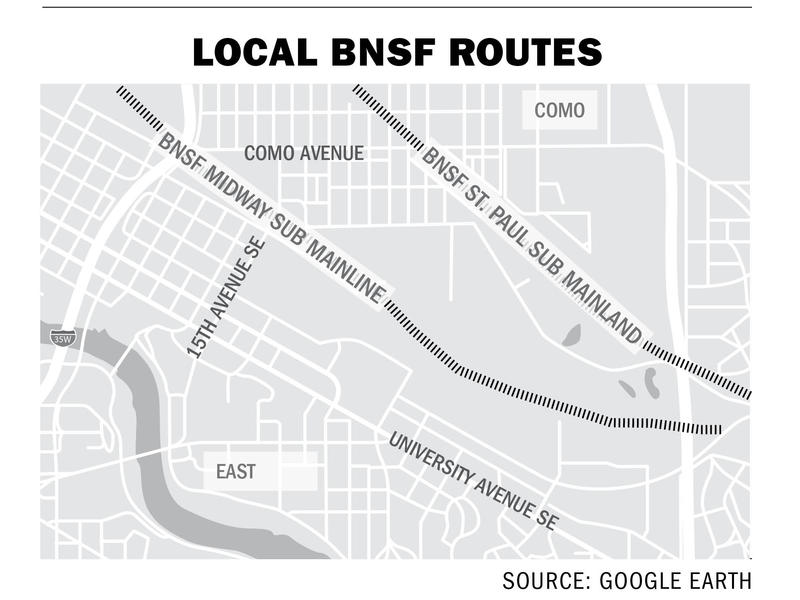 According to Suzanne Hattenberger, manager of environmental operations for BNSF , the results found in their tests were similar to Minnesota Commercial Railway’s and confirmed the dust produced from their sand transport is not harmful to the public.

But BNSF and Minnesota Commercial Railway representatives could only present executive summaries at the meeting, rather than the full research because of contractual obligations — an action some residents questioned after the meeting.

“If I can’t actually see the reports that they’re talking about and using as their evidence, then what am I supposed to believe?” Kevin Campbell , a senior at the University of Minnesota and Southeast Como resident said. “That still leaves things up in the air.”

Wayne Hall, director of operations at Minnesota Commercial Railway, later said the release of their data was approved and would be released to the community council for further discussion.

There is also concern about the air surrounding the neighborhoods’ industrial area.

Members of the MPCA will work to work to fill in present data gaps concerning silica sand through the assessment of air quality.

The MPCA, which provides permits for air and water quality at various facilities, does not have direct jurisdiction to enforce changes in railway transportation practices.

“It’s going to be in the interest of this industrial sector to start providing the data to answer some of these big questions about ambient air quality,” Pribble said.

Nancy White , a Southeast Como resident said she’s most concerned about the future.

“This is right in my backyard and because of that I want to know what that will mean for my neighborhood,” she said.