This year’s “Expanding the Frame” film series at the Walker Art Center, starting this weekend and running through February 28, celebrates risk-takers. Some are the films’ subjects, others are filmmakers pushing the medium itself or challenging censorship—cultural or political.

International award-winning Chinese filmmaker Zhao Liang’s documentaries take a fly-on-the-wall approach. Without commentary, Liang simply lets us look, drawing conclusions ourselves. Petition: The Court of the Complainants (January 29, 7:30 p.m.) follows peasant “petitioners” in Beijing appealing injustices by local authorities. Filmed right before the 2008 Olympics, Chinese petitioners living outside evoke America’s homeless. Universal at heart, this is human will up against the indifference of power. Crime and Punishment (January 30, 7:30 p.m., with a talk by Liang at 3 p.m.) starts like the TV show Cops—Chinese-style—but ends like the Rodney King video. Rookie guards aim for military precision in doing their duty, dealing with the absurd and petty, but end up abusing the accused. Zhao’s short films screen daily (through March 14). Heavy Sleepers observes Chinese construction workers’ lives, similar to Mexican migrant farm workers in the U.S., and Natural Landscape explores the decaying Great Wall of China. Zhao’s style is an intensification of reality, that hurls you into the places he films.

French novelist-turned-film-maker Marguerite Duras is the polar opposite of the Kuchars. Director Dominique Aurey’s Marguerite, a Reflection of Herself (February 4, 4:00 p.m., free) reveals a deeply serious woman who wrote 34 books, including the 1984 international, controversial best-seller The Lover, published at age 70. She lived through the 20th century’s major events. Born outside Saigon in 1914 to French parents, Duras grew up poor in Vietnam, went to Paris at 18, became a lifelong Communist, joined the Resistance in World War II, and protested the Vietnam War. Duras was part of the 1950s Nouveau Roman (new novel) literary movement, rejecting the classical novel as unable to describe modern life after the world wars. Aurey’s film beautifully explores Duras’s life, from her years as a “wild child” in Vietnam to her later life as a complicated woman living by her own rules. Clips from 40 years of television interviews conceal as much as they reveal of a woman who, at her core, remains mysterious. This is a fascinating character study that should inspire re-discovery of Duras’s novels. 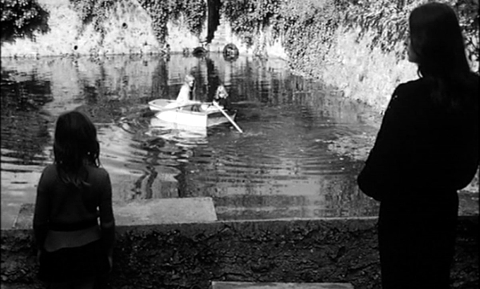 With a gritty rural setting, Argentina’s Lisandro Alonso’s Liverpool (February 12, 7:30 p.m.) is a minimalist mediation on the theme of “you can’t go home again,” following a middle-aged sailor’s return to his village. The film’s melancholy tone is an illuminating testament to constancy, but requires surrender to its quiet pace.

Daniel Barrow’s Every Time I See Your Picture I Cry (February 24, 7:30 p.m.) combines graphic novels, “intimate comics” a la Lynda Barry, with vulnerable storytelling, inventing a new style of animation. A sanitation worker devises “personal histories” from collected trash. Barrow’s film has emotional impact and he is an artist who will be very worth watching as he continues to develop.

These are only the highlights of a diverse, daring lineup. The official theme of this year’s Expanding the Frame series? Appropriately, it is Journeys.