The diversity of subject and style by the Minnesota filmmakers whose work is featured in the Walker Art Center’s Women With Vision Film Festival really impressed me. Many of these directors are breaking new ground in what documentaries can do and how they do it. Even when taking on the most painful subject matter—war, genocide, colonialism, and loss of land—you walk away from these films feeling human beings’ potential to solve even our greatest challenges.

Blurring the lines between documentary and feature film, Barbara Weiner’s Ida’s Story (March 20, 1:30 p.m.) is an “immigrant journey” that completely enthralled me. With her siblings, orphaned eight-year-old Ida escapes pogroms (massacres of Jewish people) in Ukraine in the aftermath of 1918.

Weiner observes that “when people find out you’re a filmmaker, they tell you they’ve got the movie you should make.” This time that old trope proved useful when Weiner met Ida, an acquaintance’s 90-year-old mother, for lunch. “When I got home, I looked at the newspaper and on page two was a photograph of refugee women, being taken across a border in a hay wagon. It looked just like what Ida had described!” Weiner remembers. “Ida’s story happened 80 years ago and this story happened yesterday, but they were the same. That’s when I knew I’d make the film.”

The film switches back and forth between Ida telling her story and beautiful dramatizations that draw you into the events with real tension and suspense. The resiliency of these children and the daily kindness of strangers stand in moving contrast to the surrounding violent prejudice. Weiner frames this great escape story from genocide in larger issues, with occasional comments from scholars.

“Why does this keep happening? Why do people do this? How do people survive this?” asks Wiener (and her film). “And how do we keep this from happening again?”

You will be totally surprised by Pride of Lions (March 20, 3 p.m.), made by sibling co-directors Louise Woehrle and John Woehrle, which has won multiple prizes on the festival circuit. Sierra Leone’s 1991-2002 civil war left “scars on the buildings, scars on the people.” Interviews with child soldiers, survivors, and amputees expose that colonialism (not just “blood diamonds”) ignited the war and its costs. Freetown, the capitol, was “the Athens of West Africa” and the ambition to reclaim that quality infuses this film. A young doctor remains in his homeland, works with an American medical student, to build a clinic; a businessman focuses on sustainable agriculture; a former child soldier becomes a bicycle mechanic, dreaming of a better future; a principal works to restore his high school. For once, we get to see African people as agents of their own destiny. Beyond being another documentary about war, “Pride of Lions” leaves you inspired by the possibilities for peace when a people reject violence and take up shared responsibilities to re-build their communities. I found myself wondering how we might apply the lessons of Sierra Leone to our own inner-city neighborhoods torn by gang wars.

Fritz: The Walter Mondale Story (March 27, 3 p.m.), is a biography of one of Minnesota’s most well-known politicians. Director Melody Gilbert uses home movies, archival news footage, and interviews with Jimmy Carter, Don Shelby, family, and friends as daughter Eleanor Mondale narrates. There’s the sweep of decades: Mondale’s mid-1950s mentorship by then-Senator Hubert Humphrey, 1960s civil rights as Minnesota’s Senator (with Vietnam barely mentioned), Carter’s VP from 1976-1980, a failed 1984 run for president and a 2002 place-holding campaign after Senator Paul Wellstone’s death—all treated superficially. Confronted by the Mississippi Freedom Party at the 1964 Democratic National Convention, Mondale’s hatchet-man role isn’t revealed. Battles for voting rights and anti-discrimination laws are made dull. Nothing is asked about the corporate shift of the Democratic Party since the 1980s. With its cozy conventionality, this could be a campaign trail video; it adds little insight into the man or the times he’s been part of. 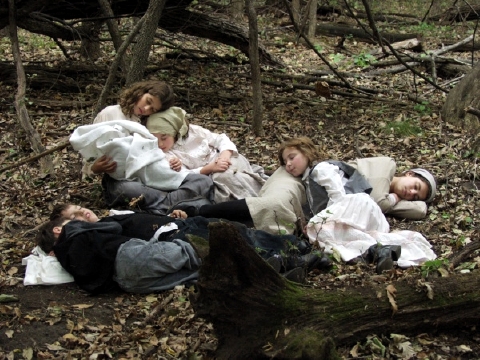 Finally, don’t miss Woven From the Land (March 27, 1:30 p.m.), Teresa Konechne’s journey to come to terms with her own rural roots in an increasingly urban era. 17 years in the making, Konechne’s film has the director returning to her South Dakota farming community to talk to white farm women and Indigenous women, who stayed, left, and returned.

“Women left for different reasons—to explore the world, because they felt trapped, economics. Whatever the reasons were, there’s still incredibly deep connections to that sense of place, to the land,” Konechne says. “It’s difficult to explain because it’s not part of a Western world view. The land is integral to our being, but we don’t have the words to describe it. The Lakota people ‘s word for the Earth roughly translates to: ‘Everything that is above the earth and everything that is below the Earth. Grandmother Earth.’ We don’t have anything like that in our Western concepts. The word ‘rural’ just doesn’t encompass enough.”

Konechne’s previous film This Black Soil looked at an African-American rural community who fought pollution and poverty (and won), so, her inclusive perspective of Indigenous women has solid precedence.

“In South Dakota and across the country, you have two cultures [Indigenous and white peoples] living side by side who have little relationship to each other,” the director observes. “Native people have to live in a Western world while trying to hold on to Indigenous cultures.”

Beautifully photographed and delicately edited, this film is part Konechne’s memoir, part a crucial meditation on a direct experience of what “living from the land” means in an era of corporate agriculture and climate change. Konechne’s film accomplishes nothing less than quietly evoking a vision of a healthy relationship to the planet we rely on for our survival.

Another “homecoming” film, Sveit by Kya Kristjansson-Nelson (screening daily in the Walker’s Lecture Room), is a genealogical journey back to the director’s family roots in Iceland. Like the Lakota terms in Konechne’s film, the term “sveit” is untranslatable to English, meaning “what connects you to the earth, history, nature, humanity.” Kristjansson-Nelson poetically synthesizes animation and cinematography to capture this enigmatic environment.

All the directors, except Kristjansson-Nelson, introduce and discuss their films at the screenings. You can hear interviews with Barbara Weiner and Teresa Konechne on March 19 at 11 a.m. on Catalyst: Politics and Culture on KFAI radio, 90.3 FM/106.7 FM.