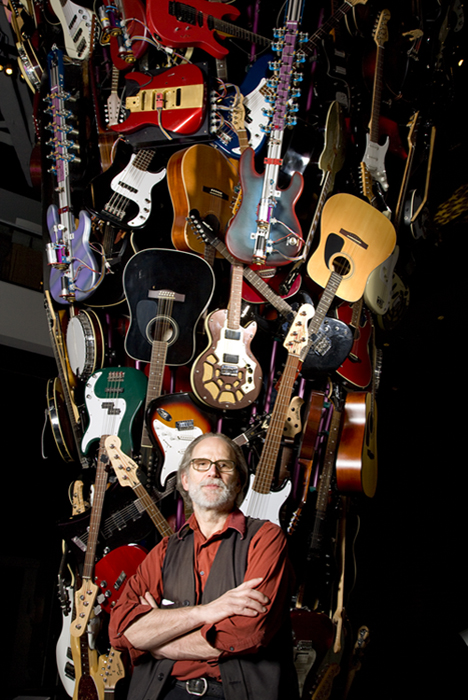 Throughout the week, the Daily Planet will feature audio interviews with filmmakers discussing their films in this year’s Sound Unseen Film Festival. The festival, which kicked off this past Tuesday and ends Sunday and typically features films with a music theme, is in its 10th year. Make sure to check out the festival Web site to purchase tickets, view trailers and information for all the films, and explore what this cultural event is all about.

All the interviews were done over the phone, recorded on my computer. In this entry in the series, I speak with Peter Esmonde, director of the curious and enthralling documentary Trimpin: The Sound of Invention. (Click on the icon at the bottom of this article to listen.) Check out the film’s Web site for more info. Trimpin screens this Friday (October 2) at 7 p.m. at the Trylon Microcinema.

The official plot synopsis (by way of the press notes) of Trimpin reads:

Trimpin: The Sound of Invention is an amusing journey through the sonic world of an eccentric creative genius. Artist/inventor/engineer/composer Trimpin shuns the hype and hyperbole of the commercial art world—yet his freewheeling sculptures and outrageous musical experiments are cherished by museums all over the planet. Filmed over two years, this cinema verite documentary feature follows the artist/inventor as he devises a perpetual motion machine, builds a 20-meter tower of automatic electric guitars, and collaborates with the Kronos Quartet on an outrageous world premiere. The film will delight anyone interested in the mysteries, pitfalls, and sheer joy of creative experiment.

I begin every interview with the same question. Having seen nearly all the films in this year’s Sound Unseen Festival, a clear theme emerged. These are stories about people pursuing their dreams, consequences be damned. So I lead off asking the filmmaker about this theme as it pertains to their film.

Erik McClanahan (erik.mcclanahan@gmail.com) is a freelance film journalist and critic in Minneapolis. He is also co-host of KFAI’s Movie Talk.