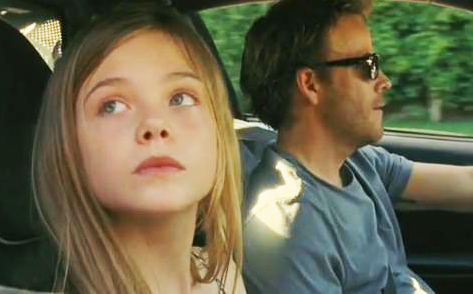 Writer/director Sofia Coppola’s breakout feature was the instant classic Lost in Translation (2003), with Bill Murray as a burnt-out Hollywood star visiting Japan to make a quick buck as a shill for Suntory whiskey. Coppola returns to very similar territory in her new feature Somewhere—opening January 7 at the Lagoon Cinema—but with characters who are far less interesting, entertaining, and dynamic. It’s as if gold-medalist skier Maria Riesch were to show up for the 2014 Winter Olympics wearing snowshoes instead of skis.

In Somewhere, Stephen Dorff has the role of the weary celebrity, an action-movie star in his late 30s who drifts from press engagements to makeup sessions to massages with that special brand of ennui that can be truly experienced only by those who are outrageously sexy. (Trust me on this.) He can bed any woman who crosses his path, but he’s so bored by his casual hookups that he actually falls asleep face-down on the landing strip of one of his conquests. This listlessness is established in a series of tableaus that become authentically, excruciatingly boring. The occasionally-heard score by Phoenix leaves ample room for us to catch tiny, mundane sounds. At first, this feels like gratifying attention to detail—when Johnny turns his car off, we hear the ticking of the cooling engine—but soon becomes painful, as we listen to a cigarette crackling while Johnny smokes it right down to the butt.

And then puts it out.

And then has a swig of beer.

And then stares at the cigarette butt in the ashtray.

And then has another swig of beer.

And then thinks about lighting another cigarette.

Eventually, we meet Johnny’s 11-year-old daughter Cleo (Elle Fanning), a smart, kind, gently intelligent girl who reminded me of the almost frighteningly poised teenagers I met this fall when I visited friends in a wealthy suburb of Boston. Cleo and Johnny obviously adore each other and have a warm, playful relationship. So what’s the problem? Well, Johnny’s a movie star, and Cleo’s mom has taken off to an unknown place for a getaway of unknown duration. Shortly, Johnny is to deposit Cleo at summer camp. During the film’s second act, Coppola quietly but unsubtly drops hints that Cleo would appreciate feeling like she was actually a top priority in someone’s life rather than being passed off by her parents as if they were on a shot clock.

Roger Ebert defines an Idiot Plot as “a plot that requires all the characters to be idiots. If they weren’t, they’d immediately figure out everything and the movie would be over.” This type of plot is usually found in brain-dead thrillers and overlong whodunits; Somewhere may be the smartest movie with an Idiot Plot ever to have been committed to celluloid. It looks and sounds like an art film, but if you strip away the exotic locales and languid silences, you’re left with the bones of a Hallmark Movie. Should Johnny forsake at least a portion of his soulless jet-setting lifestyle to spend a little more time with his daughter? As my aunt Betsy would say, “Gee, do you think maybe?!”

This being a Sofia Coppola movie, there are several lovely moments, which would be more enjoyable if the movie wasn’t so obviously aware that they are Lovely Moments. Dorff and Fanning pantomiming tea-drinking at the bottom of a swimming pool is cute, but it’s presented in a context that’s neither simply fun nor engagingly complex, so the episode might as well have been a Lufthansa ad. Fanning’s performance is subtle and charming, but this review has already told you pretty much everything there is to know about her character, which means Fanning is given over an hour to subtly demonstrate what a less mature 11-year-old might simply scream out in about ten seconds. Dorff is shaggy and likeable, and Coppola has some fun with the absurdity of celebrity life, but even the best moments in this vein will remind you of much funnier scenes in Lost in Translation.

Somewhere strengthens Coppola’s claim to the title of auteur laureate of lovely lassitude, but that’s just about all it does. This movie is really, really, really boring.