In the eyes of many Americans, Iran—infamously characterized by President George W. Bush as being a member of the “Axis of Evil”—has been reduced to one man (President Ahmedinejad) and a few caricatured images. For the second year, the Walker Art Center presents an alternative with its “Views From Iran” film series, April 9-30.

Since the 1920s, Iran has had a sophisticated film industry that has always included female filmmakers. Although the culture has become more conservative since the 1979 Islamic revolution, Iranian filmmakers—sometimes in exile—continue to make extraordinary cinema.

About Elly (April 9, 7:30 p.m.) explores the baroque complications of rigid social mores and the deception that goes on in their service. Half Iranian-style Jane Austen, half mystery, a group of middle-class mostly-married friends take a beach house for a long weekend. Golshifteh Farahani (banned in Iran, she’s the first Iranian actress to act in a major Hollywood film, Ridley Scott’s Body of Lies) plays Sepidah, a wife of emotional intensity, who unwittingly sets unforeseen events in motion by an attempt at matchmaking. She brings a seemingly shy acquaintance, Elly, to introduce to a recently divorced male friend. The film suddenly gets scary when the increasingly mysterious Elly disappears. While the film is a bit slow in the beginning, tension rises after Elly’s disappearance, climaxing in an ending that lingers with an edge. This is entertainment with substance. About Elly was a winner at the Tribeca and Berlin Film Festivals.

Creating multiple protagonists and interweaving plot lines is tough to do, but, the gorgeously filmed Women Without Men (April 15-16, 7:30 p.m.) succeeds magnificently in exiled video artist Shirin Neshat’s feature debut. We follow the lives of four women in 1953, just before and during the U.S.-backed coup that put the dictatorship of the Shah into power. The four women are: Munis, an unmarried woman who has a political awakening in spite of repressive restraint from her fundamentalist brother; her friend Faezeh (secretly in love with the brother) and shattered by unexpected horrors; a young prostitute fleeing the brothel and finding herself; a middle-aged wealthy woman disillusioned with being the wife of a general supporting the Shah, who breaks free to create an independent life. Inspired by the novel by fellow exiled and banned Iranian writer Shamush Parsipur, Neshat translates literary magical realism onto the screen believably and anchors it in a strong narrative. Real oppression is shown without turning women into victims or super-women survivors, but rather as realistic resisters in an often surreal world. Personal and political life entangle and the four women’s lives converge in a lush orchard refuge. It’s rare to see either magical realism or political themes dealt with so well. I hope I get to see Shrin Neshat’s next film. Women Without Men is banned in Iran for its willingness to look at sexuality and religion.

Young love is explored with a heartbreaking twist in Heiran (April 25, 2 p.m.), the debut feature of female documentary filmmaker Shalizeh Arefpour. Mahi is a studious and stubborn Iranian 17-year-old with a father determined that she’ll go to college for a future beyond their subsistence farming. Falling in love with Heiran, a gentle Afghan refugee, Mahi is swept into a passionate attachment her family can’t break. Her sole ally is a grandfather who, it seems, had such a love with his departed wife; he’s tenderly played by the beloved Iranian actor Khosro Shakibaei, in his last performance. The devoted couple face a series of obstacles, in the context of the severely restrictive laws for the 3 million (mostly illegal) Afghans who fled to Iran when the Taliban ruled Afghanistan. One can’t help but see parallels with undocumented Mexican immigrates here in the U.S. and feel the cruelty with which governments guard borders. Heiran is a universal love story of consequence. 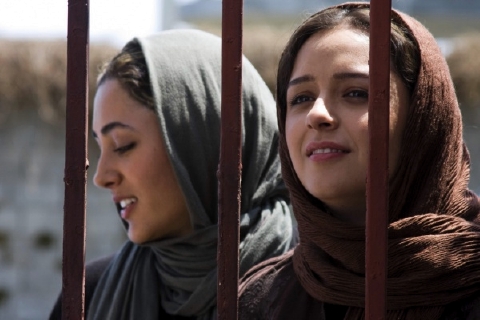 Rakhshan Bani-Etemad is a world-renowned filmmaker who began in documentary and now also works in fiction. She is coming to the Walker to teach a master class and will give talks at two screenings of her films.

Using research into Iran’s increasing drug problem, Bani-Etemad’s Mainline (April 23, 7:30 p.m.) is a feature with her daughter Baran playing the protagonist, Sara, a heroin addict who relapses in the weeks before her wedding. It’s a road trip for recovery, a torn mother-daughter relationship and the battle against addiction that crosses all cultures.

We Are Half of Iran’s Population (April 24, 7:30 p.m.) is Bani-Etemad’s latest film. In a film made three months before Iran’s June 2009 presidential election, Bani-Etemad gives voice to the women of Iran trying to be heard by the all-male presidential candidates, who see their filmed statements and respond (except for incumbent President Ahmedinejad). From conservative women to fierce feminists, contemporary conditions for women are stated, often bluntly: limited quotas for female students to enter colleges with more qualified women not accepted into medical school, oppressive family and divorce laws that abandon women to domestic violence, female drug addicts in harsh prisons, struggles for economic independence that American mothers can relate to. This is a profound document of women’s liberation. The women connect their issues to the United Nation’s 1979 Convention on the Elimination of All Forms of Discrimination Against Women, which they demand that Iran sign. Americans might be surprised to know that the U.S. is the only developed nation that has refused to sign the Convention.

If you want more true life views on Iran, there’s a talk by freelance journalist Laura Secor (April 13, 7 p.m.), who has reported on Iran’s culture and politics for a decade. Her reporting has appeared in the New York Times, Rolling Stone, and The New Yorker. She will also be appearing at a brown bag lunch sponsored by the Twin Cities Media Alliance (April 13, 12 p.m., East Lake Public Library).

Although I wasn’t able to preview it, I have a hunch you shouldn’t miss No One Knows About Persian Cats (April 30, 7:30 p.m.). Since the 1979 revolution, certain music—especially Western music—has been banned in Iran. The leasing Kurdish filmmaker in Iran, Bahman Ghobadi, synthesized documentary (the characters are played by actual Iranian underground musicians) to create a dramatic feature about youth culture, artistic repression, and rebellion. They face arrest but nonetheless make the forbidden heavy metal music they love. Filmed in 17 days, Ghobadi used a lot of ingenuity and a S12K camera, since the state owns all 35mm equipment and he wouldn’t have been given permission to film. The screenplay was co-written by Roxana Saberi, the Iranian-American journalist who was imprisoned and charged with espionage by the Iranian government last year and released only after her case attracted international attention.

Why the film’s title? Director Ghobadi told an interviewer, “We don’t have the right to take our dogs or cats outside. However, inside our homes, we have cats we love very much, and besides Persian cats are very expensive. I compare them to the young protagonists of my film, without liberty and forced into hiding in order to play their music. What’s more when I visited the musicians homes, I noticed the cats liked to stand in front of the amps and listen!” Ghobadi acknowledges that his film won’t be screened in Iran.