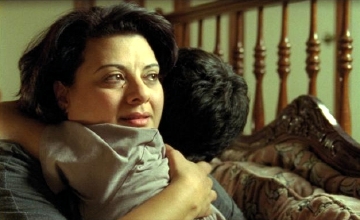 When I spoke with writer/director Cherian Dabis by phone last week, we talked about her new highly entertaining and thought-provoking film Amreeka. Since having its world premiere screening in the dramatic competition at the 2009 Sundance Film Festival, Amreeka has enjoyed great word of mouth and praise from audiences and critics alike. The film also had its international debut in the Directors’ Fortnight at the Cannes Film Festival this past May, where it won the prestigious FIPRESCI prize, an award that is given at international film festivals to promote film-art and to encourage new and young cinema. The film is now playing at the Edina Cinema; don’t be surprised if Amreeka ends up on some 2009 top ten lists at year’s end.

Amreeka, which means “America” in Arabic, is about Muna (an outstanding Nisreen Faour), a single mother from the West Bank (a Palestinian, Israeli-occupied territory in the Middle East) and her 16-year-old son Fadi (Melkar Muallem), who gets a green card to come to America to stay with her sister, Raghda (Hiam Abbass, last seen in The Lemon Tree and Tom McCarthy’s Oscar-nominated film The Visitor) and her family in rural Illinois. When Muna’s savings of $2,500 is taken from a cookie tin by customs agents at the airport, without her knowing, she is forced to find work and cannot get the same job as she had in Palestine, working at a bank. Instead, she finds work at a White Castle restaurant that is next door to the bank, where she has her sister and others drop her off at thinking that she does work at the bank. Fadi begins having trouble adjusting to his new school but thanks to the help of Raghda’s daughter, Salma (played by Alia Shawkat, best known from TV’s Arrested Development) she helps Fadi fit in to his new school and surroundings. All these storylines are constructed beautifully and despite the struggles and circumstances that Muna and Fadi are faced with in adjusting to their new American life, Amreeka still has an uplifting message that everyone can relate too.

Having seen the film at Sundance (and reporting on it for the Daily Planet), this was a great opportunity to speak with Dabis about her film and its message.

This is a very personal film for you. How much of the story is autobiographical?
I would call this a semi-autobiographical story and many moments were inspired by my family. While I was writing it and putting it together, I drew from different moments from my own experiences as an Arab-American in a small town during the first Gulf War in 1991 and during that time, a lot of what happens in the movie happened in to me in real life. My father was a physician, and he lost a lot of his patients because people didn’t want to see an Arab doctor. We got death threats on a daily basis, and in fact things even got more absurd than they do in the movie. The secret service came to my high school to investigate a tip that they got that my 17-year-old sister allegedly threaten to kill the president. So it got very absurd. There were letters written to editor of our local newspaper saying things like, “Those Arabs should leave town.” My mother was banned from shopping at the local florist because other customers were threatening to boycott if she shopped there. So the wartime patriotism just tightened this sense of fear and paranoia. I was 14 years old at the time, and I was really struck by how the mainstream media perpetuated these stereotypes of Arabs and Arab-Americans and those stereotypes were having a direct impact on us. That was a life-changing event for me and a real political awakening, and I became obsessed with the media portrayal of marginalized communities and I started to want to do something about it. I wanted to get our authentic stories out there. So that was one of the things I drew from for the story. Another thing that really motivated me to tell this story and to become a filmmaker was watching my aunt immigrate to the US in 1997 from Jordan with her teenage son. She struggled to find work, but I was inspired by her actual story of struggle and more inspired by her attitude of total hope and optimism and just how she dealt with all of her obstacles in her past. I found her to be just so disarming because of the way she had total belief and faith in people. I thought, “What a refreshing point of view.”

You got a terrific lead performance from Nisreen Faour. How did you find her for this pivotal role?
Well, casting the movie was one of my biggest challenges in the film. I traveled for a period of 6-8 weeks, first in the U.S. and I was doing casting sessions all over from New York to Los Angeles to Chicago, where there is the largest population of Arabs outside of the Middle East, and what I was finding in the U.S. was that most of the Arab-American actors were in their twenties and thirties, whereas I was looking for adults in their forties and fifties, and I was finding that many of them were Americanized. I wanted those characters to feel a bit more like “fish out of water” types. But then I wanted to look elsewhere, so I stopped in Paris to do a casting session there and then I went to the Middle East with stops in Beirut, Jerusalem, Bethlehem, Ramola, Tel Aviv, and a few other cities doing casting sessions and working with casting directors. They don’t have your traditional casting directors, but the actor community is so small that everyone knows everyone. I sat down with one of the casting directors and she asked me all these questions about the character of Muna: what she looked like, what was her relationship like with her mother, why was she divorced, all these questions. After about three hours of questions, she wrote down the name Nisreen Faour and she was the first person that she recommended to me. I called Nisreen that same night and I invited her to a casting session the next day in Haifa. She came in and the moment she walked in there was something very sweet and pure about her, and she was very honest and expressive about her. She came in with her two sons who were seven and nine years old. They had a very interesting rapport where they acted like her equals, where it wasn’t like mother and son but more like friends, and I wanted to do that in the film where Fadi feels more like her husband than her son. She read a scene and couldn’t stop giggling afterwards, and the more I saw her and talked with her and even going back and watching her audition tape, she really embodied the spirit of Muna. She is also a well-known theater actress in Haifa and she’s done four Palestinian films, but this is her first International and English speaking part.

How has the reception been for the film now that it’s out in major markets across the U.S.?
The response to the film has been tremendous. Even as early as the editor seeing footage from our first work-in-progress screening, people were responding extremely well but it wasn’t until our world premiere at Sundance that I was just so blown away that I knew we had something special, and that response has really set up the film since. The theater was packed and there was such warmth in the audience—it was as if the warmth in the characters just rubbed off on the audience. There was so much goodwill for the film and for the characters. The interest in the audiences could be seen in the questions they asked, and that was a thrill. Even within the Arab community, there was a feeling of pride. They came up to me and thanked me. Many people within and outside the Arab community have also come up to me and said, “I felt like I just spent an hour and a half with your family,” which is great to hear. Whether you’re Arab-American, or some other immigrant American, or [whether you were born in America], they can really identify with this movie, and the response has been great. This story has been with me for a long time. I started writing the screenplay in 2003, and now that that it’s out, the response has been great. In fact, it’s a bit shocking how great the response has been.

Has the film been shown in the Middle East yet?
No, it hasn’t but the film is having its Middle East premiere in October and so there hasn’t been an Arab reaction to the film yet, outside of the U.S. The film is having its Palestine premiere in Ramallah’s Al-Kasaba Film Festival on Oct 8th and then it will have its Lebanese premiere at the Beirut International Film Festival on Oct 12th & 13th. I’m really excited for these screenings, especially since I’ll get to share it with relatives who live in Jordan and friends who are in Lebanon and more relatives, friends and the cast and crew at the Palestine premiere.

What would you like to have an audience take away after watching the film?
I would love for people to take away an appreciation for the love of the family that they see in the film and for them to walk away knowing that they can relate to many of the characters in the film. That would be so amazing. I know I’ve said that I didn’t make a political movie but for me in some ways, it is very political for me to make this movie with characters who are Palestinian and likeable. That is a political act in some ways given the history of the Palestinian issue and the recent history of racial profiling at Guantanamo Bay and the Patriotic Act and the way that Arab-Americans have been stereotyped and viewed in the media. I think if you walk out liking the characters and the families in the film, that’s interesting and political. It is a step forward and simple for me, that’s what I hope an audience takes from the film.