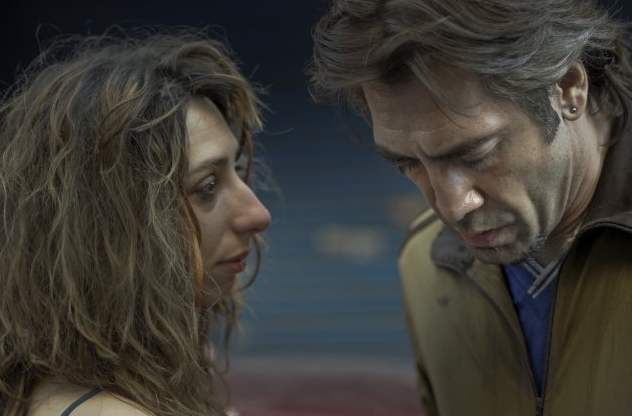 One of my favorite endings to a film is that of John Sayles’s Limbo. The characters’ fate will hinge on who’s in an approaching plane—but before the plane lands, the movie ends. Sayles’s refusal to tell us whether the characters live or die reminds us that the movie wasn’t about luck and fate, it was about the characters and their decisions. After all, in the movie of your life, would you want the most interesting scene to be the one where we learn whether or not a piano falls on your head?

A number of dramatic events take place in Alejandro González Iñárritu’s new movie Biutiful. Some of them are shocking and tragic, others are unexpected blessings. The characters inhabit an unpredictable world, one where it’s not always obvious what the right thing to do is. At the center of this world is Uxbal (Javier Bardem), a good and honorable man who nonetheless makes his living through illegal activities that put himself and others in jeopardy. Whether he chose this life or was forced into it, every day he walks the razor’s edge, and he and his family often get cut.

The setting is contemporary Barcelona, where Uxbal inhabits a shifting and dangerous underworld. He seems to have his hand in a number of different activities, principally coordinating the sale of cheap tourist goods produced in sweatshops by immigrants from Africa and Asia. Uxbal wants to help the workers to improve their lives, but his associates aren’t so high-minded. Uxbal is raising two children (Hanaa Bouchaib, Guillermo Estrella) with more hindrance than help from his wife Maramba (Maricel Álvarez), who’s separated from Uxbal and the children and is struggling with bipolar disorder.

Uxbal also has a gift: he can see, and communicate with, the recently deceased. For a fee, he brings comfort to grieving families. This is not a major plot point; its effect is to create a sense that there is a world beyond this world, that we are merely passing through this vale of tears. Is the next world any better? Uxbal isn’t so sure, and it’s a question of special concern to him because he is dying of cancer.

Iñárritu’s films are intense, and this is no exception. His critics, though, will be pleased that Biutiful relies far less than 21 Grams or Babel on the strange mechanics of chance and coincidence. This film, like those, features a large cast of characters whose lives connect in sometimes surprising ways, but here the focus remains squarely on Uxbal and his family. The film is dedicated to Iñárritu’s father, and Uxbal is the kind of father the lucky ones among us have: a man who’s not perfect, but who loves us unconditionally and works hard every day to care for us and for others.

Given that this is an Iñárritu film, you don’t need me to tell you that the acting is first-rate, and that the director showcases it to great effect. Iñárritu’s persistent strategy is to take powerful actors, put them in agonizingly difficult situations, and to closely observe them as they suffer. Bardem suffers well, and many filmgoers will find themselves moved to tears as Uxbal prepares to say goodbye to his young children, from whom he hides his condition until the very end.

Perhaps the most difficult truth this film tells, though, is the truth of Maramba, who is tortured by her inability to remain stable enough to care for her children. Maramba and Uxbal are still in love, but Uxbal knows that he cannot let the children stay with their dangerously unpredictable mother. Uxbal blames Maramba for her behavior, she blames her condition, but ultimately the distinction between can’t and won’t becomes moot. Álvarez is perfectly cast, and she shows us how Maramba can be simultaneously irresistible and intolerable.

Biutiful is a film about the graces, small and large, that sustain us in this world, a world that can be very cruel. Much of life is beyond our power to alter, suggests Iñárritu—but we do have meaningful choices to make, and even if there isn’t a higher power sorting us into saints and sinners, we can only earn peace by walking an honorable path.