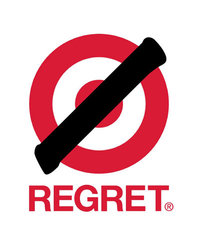 A parody of Target's logo adopted by activists urging a boycott of the company.

MoveOn.org thumbed its nose at Target CEO Gregg Steinhafel’s mince-mouthed apology for its donation to pro-Tom Emmer group MN Forward and upped the rhetoric against Target today. Ilyse Hogue, the group’s Director of Political Advocacy and Communications, said its members “will continue to escalate our fight against Target until they stop trying to subvert the will of the people.”

“Steinhafel’s apology amounts to nothing more than saying ‘I’m sorry I got caught, I’ll be more careful next time.’ This is completely unacceptable when hundreds of thousands of Americans have said clearly they don’t want there to be a next time-Target should not be trying to buy elections at all.”

Hogue says 260,000 people have so far pledged to boycott the store in response to Target’s donations to an independent expenditure group supporting Republican gubernatorial candidate Emmer, who’s been linked to anti-gay groups and legislation.

While the Human Rights Campaign earlier called for Target to make equal donations to gay rights organizations, MoveOn.org appears to be pushing Target to withdraw completely from the electoral process, something that Common Cause Minnesota has also requested of the company, urging it to enroll in Common Cause’s clean elections pledge.

Opposition to the company’s meddling in elections seems to be spreading, with immigrant advocates taking to the streets in Minneapolis last night to protest the company’s contributions to Emmer, who they said also takes toxic stances against immigrants, including support of English-only laws.

It also appears that Target’s HR interns can’t keep up with the flood of negative comments posted on Facebook. As of this morning, here’s how the page appeared: 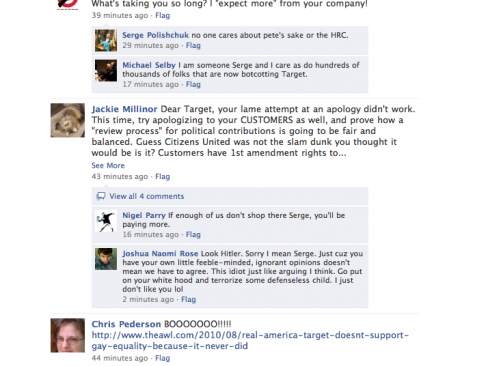