Hundreds gathered on the plaza of the Hennepin County Government Center in downtown Minneapolis Friday, joining the nationwide movement to hold Corporate America accountable for an economy that has left the majority of Americans struggling to just get by. The loose-knit “Occupy Minnesota” movement is part of a national campaign begun weeks ago by young people camping out on Wall Street. The demonstrators have no official organizers, although they have been joined by many institutions, including labor unions.

“Jobs, jobs and the right to organize. The right to a fair day’s work for a fair day’s pay – that’s why we’re here,” said Shawn Ulm, a member of International Brotherhood of Electrical Workers Local 292.

Ulm carried a large IBEW union flag that waved in the breeze among signs that said, “Tax the rich,” “No more bailouts” and “Corporate greed is ruining America.” Other unions participating on Friday included AFSCME, Steelworkers, Sheet Metal Workers and UNITE HERE. 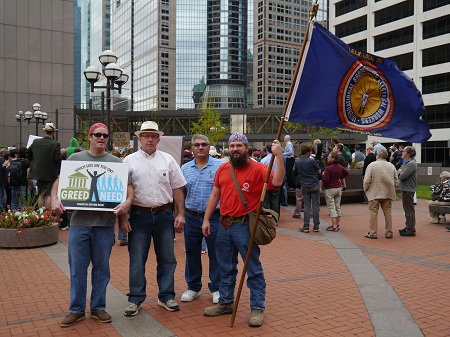 Demonstrators also marked the 10th anniversary of the start of the war in Afghanistan, with several carrying signs that called for an end to the war, the longest in U.S. history.

The “Occupy Wall Street” movement has been fueled by anger over the trillions of taxpayer dollars funneled to Wall Street to rescue the financial industry. But instead of creating jobs or ending home foreclosures, corporations have padded CEO salaries and shareholder dividends and expanded hiring overseas.

Unions, which have challenged the corporate agenda for years, joined the ranks of those supporting the new movement. 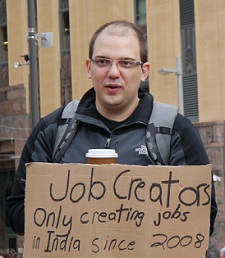 Right: Corporate America’s failure to create jobs in the United States is a key focus of the demonstrations.

The state’s largest labor federation, the Minnesota AFL-CIO, sent an e-mail alert Thursday to its activists, urging them to join the demonstration. “We hope to see you there as we stand in solidarity with those determined to hold Wall Street accountable and create good jobs,” the e-mail said.

The Service Employees International Union, with 30,000 members in Minnesota, sent a similar message to its members.

“Millions of Americans, including members of SEIU and the labor movement have been demanding that Wall Street and powerful interests be held accountable for the damage their reckless behavior has wracked on our economy and begin to pay their fair share,” said Carol Nieters, executive director of SEIU Local 284. “By putting their bodies on the line, Occupy Wall Street activists have given a powerful new expression to the hopes of people all over the country.”

Ulm said many people have come up to him and other Local 292 members who wore union t-shirts on the Government Plaza. “They thanked us for being here,” he said. “I told them unions do exist and we’re still putting up a fight for everybody.” 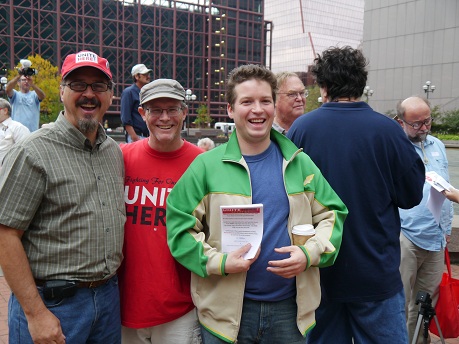 UNITE HERE Local 17 members Martin Goff, Mike Dougherty and Cameron Slick handed out leaflets blasting Parasole Restaurants for taking servers’ tips when customers pay by credit card. “The rich get richer and workers work harder,” the leaflets said. The crowd (below) swelled on the plaza between City Hall and the Hennepin County Government Center and adjacent to the 5th St. light rail station. 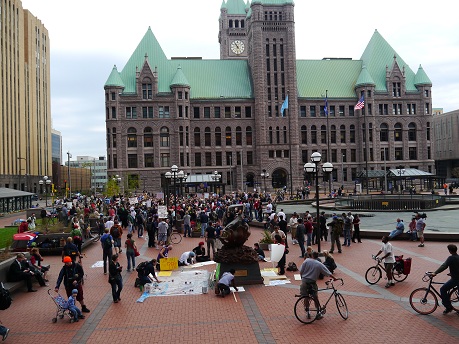