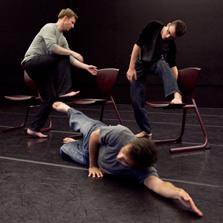 Dances are very well-executed – let’s get that out of the way immediately, so we can look at some of the underlying mechanic of the show.

Schtick consists largely of audio and video of a series of interviews with subjects about their mothers, which then informs various dances and movement sequences. At their best – which is often – they do a very good job of *illustrating* the subjects being talked about, without literally *representing* them. For the most part, I found these engaging – the movement from one gesture to another is easy to follow when the dancers’ varying attitudes, relationships, and goals are clear.

There are some stretches of time where they’re not, particularly in the beginning, with the first and second dances (well, what I’m calling the first and second dances – the sequences are tightly composed enough that it’s not always entirely clear where one ends and another begins, and let me be clear that that’s a good thing). In those moments where I lost the thread connecting one idea to another, I found myself watching what appeared to me to be a series of abstract movements, and my attention drifted. Wondering, perhaps, how much of what I was seeing was a kind of Dark Side of the Rainbow dissonance – after all, if you present an image and play a sound, the mind’s going to try to forge a connection between the two.

This was the exception rather than the rule, however – for the most part I found it pleasurable to follow. My only other complaint is, perhaps, wishing for a more prominent role for the audio/video sequences – they consisted mostly of fragmented moments pulled out of context, and consequently came off as light at best, vapid at worst. I’m aware that it’s a dance show – but if you’re using these statements and observations as an emotional jumping-off point, those statements and observations are for the most part meaningless to me when presented in such a disjointed form.

All of which makes it sound like I hated it, which is far from the case. It’s a reasonably enjoyable show, if you’re prepared to turn off the analysis, sit back, and let the elements intermingle in front of you. In other words, I’m clearly not their target audience – but it’s just as clearly well-done. They received a standing ovation at the end, so it’s quite resonant for some.