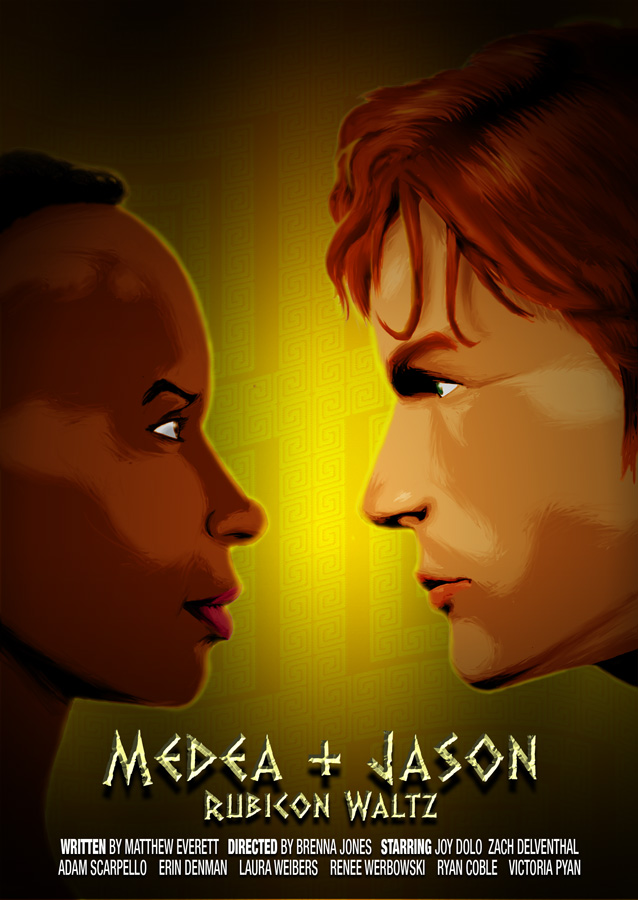 When the script for Medea and Jason: Rubicon Waltz was still taking its final shape in early rehearsals back in early 2009 down in Iowa, I was sitting in on a production meeting and suddenly realized that I hadn’t set up the story properly.

It’s one of those cases where the playwright’s been living with the play too long, so everything seems obvious to him. The designers were sitting around trying to figure out who these characters were who were telling the story of Medea and Jason.

“Maybe students are visiting an ancient ruin and unearth the spirits of mythological people and creatures from another time. The spirits take over the bodies of the students and channel the story through them. So I guess that means they need backpacks, and I guess we stage those opening moments as…”

In moments like this, I thank God for the freedom of rewrites.

Sure, *I* knew it was Medea’s story, that she was the one telling it, that she was conjuring everyone else in the ensemble to tell the tale, but I obviously hadn’t made that clear for anyone just picking up the script for the first time. Or the actors. Or the production team.

We couldn’t just launch into the story. Like any good story, you needed a framework.

Once upon a time…

Who are these people? Why are we watching them? Why does this story matter to them so much? Why should we listen?

So, OK, Medea is literally telling the story. But to who?

Well, who do you normally tell stories to?

Wait a minute. Medea has children. Or rather, had children. Depends on which version of the legend you’re listening to…

So Medea is telling the story to her children – who may or may not be dead.

When you get freaky inspiration like that, you have to run with it.

“What story? What story shall I tell you?”

“The story of the Golden Fleece.”

Refrains that resurface time and again include:

“This is the story of how your mother met your father.”

It occurs to me that I don’t know the story of how my mother met my father. I should ask.

For these kids, it’s a doozy of a story. A romance with a frighteningly high body count.  How the young adventurer Jason met the young princess Medea.

We do our first run through with costumes tonight.  Tech begins tomorrow night.

The show opens this weekend.