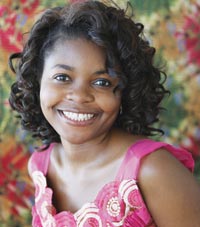 When LaBelle Nambangi heads into work, she isn’t sitting down at a quiet desk covered with neat stacks of paper. Instead she travels to five metro area high schools where her “desk” is most likely a table in a classroom, surrounded by students of African descent. Nambangi is from Cameroon, and her job is to make the United States a more welcoming place for girls and women like her.
Nambangi, 30, has lived in the Twin Cities for more than 10 years. Her mother immigrated to Minnesota in 1992, the recipient of a Hubert Humphrey International Fellowship. Nambangi and her two brothers remained in Cameroon with an aunt until they joined their mother in August of 2000.

The years since have been a blur of schooling for Nambangi. She first studied accounting at St. Paul College, received her B.A. in business administration in 2007 from Metro State University, and then completed a mini M.B.A. in nonprofit organization at St. Thomas University. Nambangi is currently studying at St. Mary’s University for her master’s in Health and Human Services Administration, and will graduate in April.

“I want to use my knowledge to make change within the African community,” Nambangi said. Whether she returns to her native Cameroon or stays on in her New Hope neighborhood, Nambangi is indeed supporting her sisters. She works as the leadership coordinator for AGILE-African Girls’ Initiative for Leadership and Empowerment, a program within the Minnesota African Women’s Association (MAWA), where her mother is executive director. She helps high-school-age girls and their families navigate the local educational system. Many parents are not aware that their girls are often placed in an English as a Second Language classroom, even though their primary language in Cameroon is English. Consequently, many African girls take an extra year to complete high school, not realizing they can test out of language requirements.
Another challenge Nambangi negotiates is the gulf of misinformation separating African and American students. “[These] schools are segregated,” Nambangi stated. African students are laughed at because of their accent, they are called disrespectful names like “African booty scratcher,” and they are often asked ignorant questions like whether they wear clothes back home or hang from trees, she explained.

Nambangi was herself a victim of this discrimination while in undergraduate school. She often found herself in an accusatory environment, regarded with suspicion. “Every time I would think it was getting better, but then I realized it was not,” Nambangi said. “It was this feeling of, ‘So why don’t you go back home?'”

Nambangi discovered a much more tolerant atmosphere in graduate school, and particularly enjoyed meeting people from diverse backgrounds. In Cameroon, she explained, she had only known other Cameroonians and Nigerians. In grad school, however, she met people from several African countries and other ethnicities she had never encountered, such as Hispanics and Asians.

The African students Nambangi works with also have intercultural conflicts to overcome. Traditionally, many African countries place more emphasis on education for boys, and that deeply rooted attitude plays out in families here. Although girls attend school, they are often not allowed to participate in extra-curricular activities, expected instead to help out at home with cooking, chores and the care of younger siblings. Boys, however, are free to join sports teams and other school clubs, visit with friends after school and work part-time jobs.

This gender disparity is one that Nambangi’s mother, Melissa Nambangi, has dedicated her life to changing. Melissa founded MAWA in 1998, initially with the intent to serve victims of domestic violence. But after hearing from other mothers that their daughters were having a hard time adjusting to life in America, she changed course and began offering programming focused on leadership and empowerment.

“Almost every country has a way in which women are treated unequally,” Melissa stated. “At the very bottom of it, women have similar issues, just in different contexts.”

Back in Cameroon, Melissa struggled to help peers value themselves. Even though they are working around the clock both in the home and in the fields, they have this perception that they are not doing anything because they are not paid for their work, Melissa explained. “In some African countries women are worth a fraction of what men are,” she said. “They don’t say that in Cameroon directly, but you see it … it’s implied.”

Melissa noticed a similar implication when she arrived in the United States and began working at domestic violence shelters. “You would think that the more developed a country is, the more rich the people are, the more everybody would be in a much better place,” she mused. “But then you see all this stuff on TV about domestic violence. That this still happens in one of the most developed nations really took me by surprise.”

And so she and LaBelle work to both help African women adjust to life in America, and create a more just America itself.