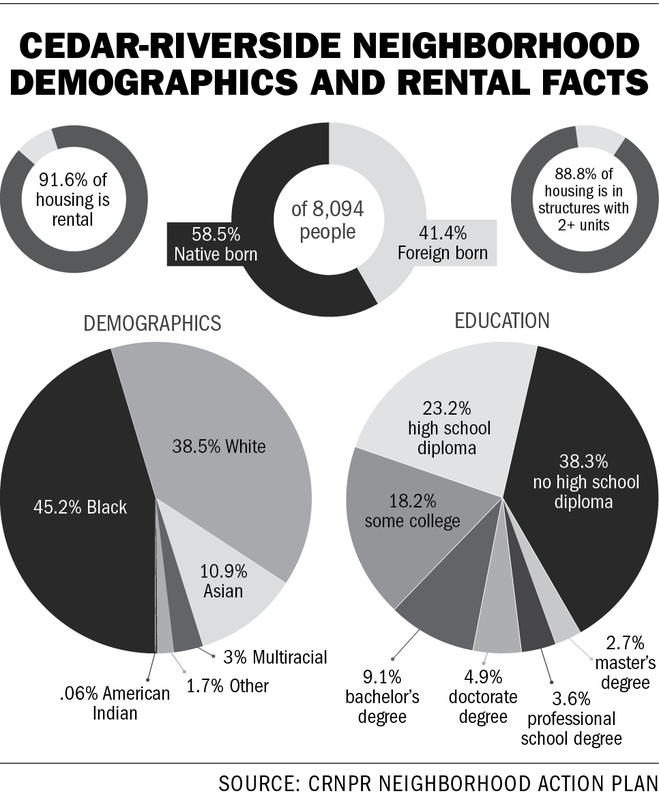 Cedar-Riverside residents are going to see some changes in the coming years.

The second phase of the neighborhood revitalization plan for Cedar-Riverside was approved by the Minneapolis City Council in December and will begin implementation in the coming months.

The largest part of the budget goes to housing. Of the $704,577 in funds allocated by the city for the neighborhood, nearly $419,000 is dedicated to improving and building more housing, especially rental units.

Neighborhoods are required to allocate 70 percent of their funds to housing-related activities, according to Cedar-Riverside Neighborhood Revitalization Program board member David Markle. But for Cedar-Riverside, housing funds are particularly important.

One of the defining aspects of the area is its high percentage of rental units: 91.6 percent.

“We really wanted to make sure that we included strategies in our plan that impacted renters,” said Elena Gaarder, executive director of the program.

Providing opportunities for residents wanting to buy a home was also a priority, she said.

As part of the plan, the City Council has allocated a loan fund of $140,000 for improvements to rental properties, including cooperatives. A grant of $96,203 has also been approved for improving owner-occupied homes, condominiums and townhomes.

“There’s a real interest in seeing if we can’t get any more home ownership in [Cedar-Riverside],” City Council member Cam Gordon said.

Michael Carus, who has been living in his home off 19th Avenue for 18 years, has a vision different from community leaders.

“When they were here doing presentations for the revitalization … they were trying to maintain a certain economic level, and they didn’t want it to rise,” he said.

The light-rail lines, the area’s close proximity to downtown and the river, the universities and sports stadiums could all create an opportunity for nicer units, Carus said.

“They don’t want to do that because it would change the characteristics of the neighborhood,” he said. “However, they’re sort of lying to themselves because it’s all rental units anyway.”

Carus said he is one of only three or four homeowners left on his block now. He bought the property next to his and is planning to build a three-unit flat for students and professionals.

Gordon said that a balance between homeowners and renters in communities is important because people who move in and out of areas quickly sometimes lack involvement.

“I do think myself there’s a certain balance where long-term homeowners can make a big difference in communities,” he said.

Eunice Eckerly, 74, has been living primarily in the Cedar-Riverside area since 1971 and has never owned a home.

Eckerly, a self-described peacemaker, has never felt the need to buy a house but has been an activist for several decades through anti-war efforts, community connection programs and student tutoring.

“I’ve always chosen to rent,” she said. “… I’ve never been a house person. … I’d rather be with people than work on a house any day.”

Besides a high number of renters, another defining aspect of Cedar-Riverside is the diversity of the area. “That’s one of the things that sets it apart and makes it different in Minneapolis,” Gaarder said.

The revitalization plan was developed in conjunction with the Cedar-Humphrey Action for Neighborhood Collaborative Engagement, or CHANCE, program in 2012 to address the neighborhood’s needs.

Graduate students from the University of Minnesota worked with the community to conduct 300 surveys in multiple languages and 16 focus groups to figure out what residents wanted.

Merrie Benasutti, who oversees the CHANCE program, said the program benefited both the students and residents heavily.

“I’m excited,” she said. “I believe the future of the neighborhood and of the University are intertwined.”