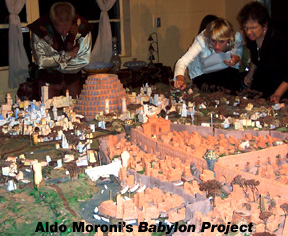 Sculptor Aldo Moroni offers an open door to his cluttered, well-used studio in the California Building in Northeast Minneapolis. The walls are covered with maps, historical timelines and research. Speaking with manic enthusiasm, he quickly circles the room and launches into a description about his pinnacle project, Babylon. Simply explained, the piece takes up 160 square feet of space mounted on a three-foot high black platform, much like a model train enthusiasts’ landscape gone bad. Blue sand representing waterways flows amongst the array of buildings, structures and rough terrain. Some sites stand individually, while others appear representational, imbedded into a slab of clay.

Aldo points out “archeologically preserved areas” from past communities that have fallen into ruin and been built over. This isn’t a stagnant project but organic—an ever-changing and evolving facade that clearly depicts the war-torn stories of the history of civilization, while eerily reflecting similarities to the current political climate, which is exactly what Moroni intends it to be.

“My sculpture combines the concepts of physical, spiritual and metaphysical Babylon … architecture is a metaphor for humanity, of who we are and what we are—spiritually and physically. It’s vital for Americans to see that the current war in Iraq is not a final resolution, but the latest chapter in an ongoing history.”

Best known for his creative, funky renditions of buildings (both known and imaginary), some might say that Babylon is Moroni’s magnum opus—the most renowned of his work. In the past two years, Moroni has created more than 2,000 miniature houses, temples, palaces and even the Tower of Babel. Yet, Babylon can hardly be described as just a sculpture. Rather, it falls into a range of disciplines including multimedia, storytelling and visual and performing art. The “documentary” is about creation and destruction, and Moroni conducts the entire process with passion.

“I believe that it is an important work of art and I am committed to bringing this piece of art to its culmination,” he says. “I believe I can make a difference in our current struggle in the Middle East by creating a piece that enters into the dialogue of significant historic art works. I am doing it now, right here in the Midwest … This is not a struggle over oil or money, it is a struggle over the authorship of history and culture.”

And it will create dialogue, especially among those who attend his exhibition event. Moroni has worked diligently on Babylon’s current phase, only to carry out its destruction on Sept. 11. He explains how viewers will be seated in the adjacent gallery and will watch via a large video monitor as he enters the studio, dons a red cape and mask, and proceeds to stomp and break the buildings and communities that he has spent so much time creating. He says that the destruction is necessary to allow the next phase to begin and to reflect history (although, apparently some of his patrons have been less than happy about the demolition of their “investments”). The evening will culminate in an authentic Mesopotamian feast that includes music and dancing.

Moroni said he will continue to work on Babylon, further developing it and taking it on an international tour in 2009. He has been closely documenting the process and hopes to publish a book on the project. “My next action is to create an imaginary place,” he explains. “I call this place New Babylon. I will follow the story all the way through history until my imaginary landscape becomes a contemporary city, complete with hundreds of skyscrapers, highways and the stuff of our daily lives.”