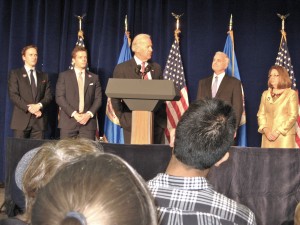 The offer of a free opportunity to see Joe Biden in person Tuesday morning was more than I could pass up, even if it meant, as it did, three and a half hours standing. Such is how it is with political rallies, this one at Macalester College in St. Paul. Coming early meant that I got a good vantage point – maybe 15 feet in front of the podium.

I should give Vice President Biden the deference and the title he so richly deserves. He is a powerful person. But more than anything else, and it comes across as he speaks, is that he is Joe Biden of Scranton, PA, who’s lived the hard-knocks that come with a common person’s life. To acknowledge his ordinary roots is to show the greatest of respect. In his case, he became a U.S. Senator in 1972 at the age of 29, and when Sen. Mark Dayton came to Washington in 2001, Biden was already third in seniority in the Senate, and Sen. Dayton was 100th (or so Mark Dayton himself said, when introducing his former colleague). Biden is a powerful speaker and had a substantive message.

The circumstances of such an event do not lend themselves to note-taking. There will be plenty of reports of what the Vice President and other dignitaries – there were many – said. My preference is to give a couple of impressions.

I’ve been to sufficient political events to know that an essential virtue is patience. This was true this morning.

The warm-up speakers, mostly political leaders, had completed their remarks (the event started on time), and then there was a lag of I would say 45 minutes before Mr. Dayton and the Vice President came on stage.

I heard somebody to my right, an adult male-sounding voice, angrily and loudly say “stop wasting our time” during a brief interlude in the very loud music which filled the gap before the Vice President appeared. I looked, and almost certainly it was that 40-ish guy in very dark sunglasses that I saw. He didn’t look like a happy camper. A few minutes later I looked again and he was gone. The rest of us just hung in there. The young people in front of me – there were lots of young people – were chatting it up and seemed not to be terribly concerned about the wait.

I remarked to a couple of high school kids behind me that anybody who’s ever been in the military knows all about waiting. A guy next to me chimed in that this was normal operating procedure in political events. It is just how it is, and no amount of “reform” will ever truly reform it.

The episode caused me to think about what I believe to be a trait we Americans seem to share: impatience.

We want it all, yesterday.

I don’t know anything at all about the angry guy in the sunglasses, but my guess is that he represented the uglier side of our society’s tendency to be very demanding of others, and less demanding of ourselves.

Indeed, the big issue in this election, from some of those who would be considered Biden’s base, is that not enough has been accomplished, fast enough.

Recently I saw, somewhere, that the Obama administration considered itself to have accomplished 73 percent of its promises in its first two years in Washington. That’s pretty remarkable.

At the end of his speech, Biden recalled a quote someone had shared with him attributed to an old mayor of Boston, a man named Kevin White. Mayor White was apparently running for reelection, and somebody was railing on him for not having done enough as mayor. White retorted to the effect “don’t compare me to the Almighty; compare me with the alternative.” I like that characterization.

November 2 the people have a clear choice: back to the past, or continue into a more positive future.

It’s the people’s choice, by not only how they vote, but whether they vote, and how much they work to get their choice selected. “Boots on the ground” will make the difference, four weeks from today.