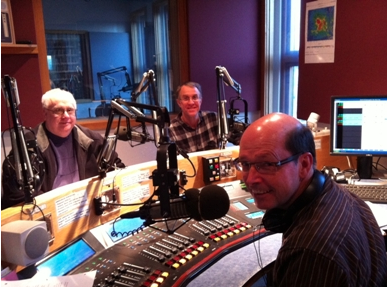 A Boon for Twin Cities Listeners

Morning radio got a big boost in September with the launch of KFAI’s the new morning show, The Morning Blend, heard Monday through Friday on KFAI from 6am to 8am. Locally produced by Twin Cities radio veteran Dale Connelly and a team of volunteers, The Morning Blend offers news, community affairs segments and a variety of music drawn from Fresh Air’s weekly schedule and presented by KFAI program hosts (described by Dale as “musical omnivores”) as well as special guests.

“We provide uncommon access to the media for people of all backgrounds,” Dale said in a recent email posting. “It’s more than a slogan. Immigrants, refugees, new citizens and recent arrivals are talking to their communities on KFAI in their native languages and saying to the larger community in no uncertain terms, ‘We are here.’ Take a moment to remember that no one else in the Twin Cities does this – it is a unique service that KFAI performs.” The Morning Blend showcases this unique, diverse programming.

In addition to a daily mix of news and public affairs, Dale points out that The Morning Blend rebroadcasts selected interviews and features from KFAI’s program schedule “that deserve to live again.” The show also airs segments produced by other community radio stations throughout the state.

“The long-term goal,” Dale says, “is for the KFAI Program Committee to select a group of music hosts who appear on The Morning Blend on a rotating basis, music programmers who are flexible and far-reaching in what they bring to the show as examples of the great material that’s heard on their particular programs.” Dale also envisions the possibility that new volunteer guest hosts might produce their own Morning Blend segments to showcase their areas of special knowledge and expertise. “The work I’ve done with volunteers so far has convinced me that we’re going to gain more participation if we can reduce the level of commitment necessary for people to be involved with the station,” Dale says. “People who may not have the time to produce a complete show could still provide shorter segments for us to consider airing. One measure of success for us is how many different voices we’ll be hearing in the morning.”

A Challenge for the Program Committee

Karen Lee Rosar, a member of KFAI’s Program Committee, described the development of the new show as an outgrowth of a long-term effort to reach new listeners during the morning hours and expose them to “the fantastic content and resources that are unique to Fresh Air Radio.” She acknowledges that “our implementation of this concept was challenging and was certainly hastened by the cancellation of ‘The Takeaway’ at the end of August. But we feel that the new program will contribute greatly to the long term sustainability of Fresh Air Radio.” Karen also echoes the feelings of many who believe that “Dale Connelly’s long broadcast experience, skill and professionalism are very important to help assure the success of The Morning Blend.”

Alan Carlson, long-time Board member of KFAI, says “I think the new morning show is actually a brilliant structural change in the way all our programming connects together.” Listeners agree, as evidenced by their many positive comments about The Morning Blend during the recent pledge drive. Lyn from Minneapolis calls the programming “inspired” and says she listens every day. Brooke from Minneapolis appreciates the feature stories from Todd Melby, stationed in North Dakota reporting on what’s being called the “Oil Boom.” Brooke says it’s how radio should be done. They like what they hear. It’s a great way to start the day.