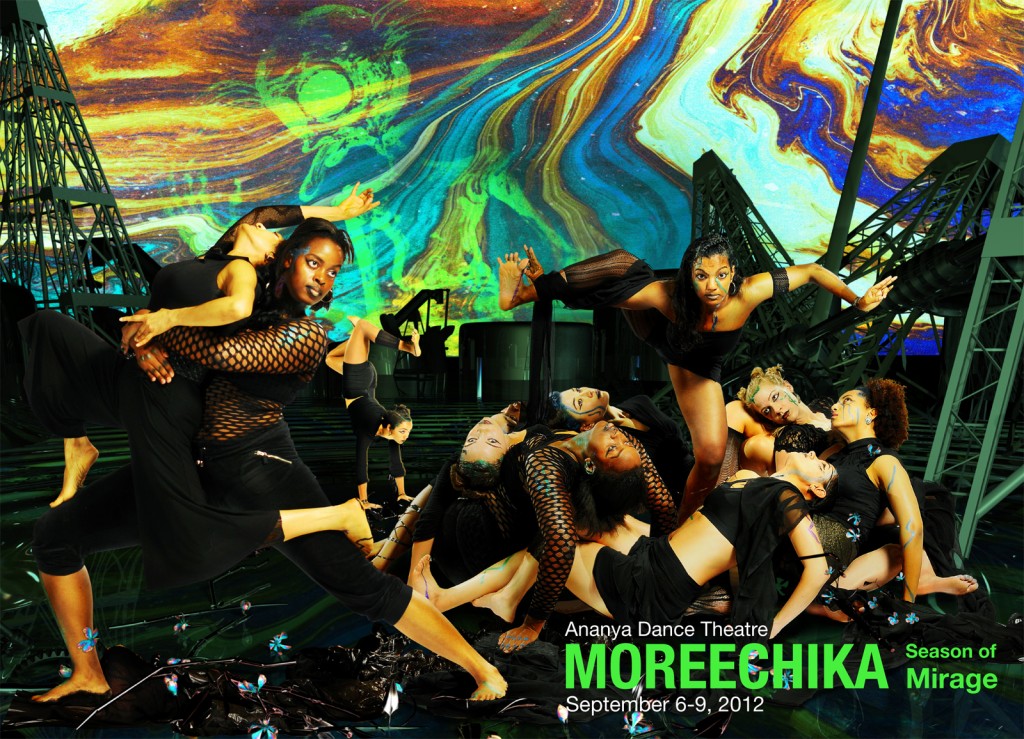 I don’t know if I was feeling a bit maudlin on Sunday September 9, or what, but man, Ananya Dance Theatre’s Moreechika, Season of Mirage at the Southern Theater sure did a number on me. The couple sitting next to me must have been getting annoyed by my sniffling, which became all-out weeping at the end.

The performance takes on the oil industry and our society’s dependence on oil. Ultimately, it’s a horror story—only the horror in this case is that it’s actually true.

Conceived and choreographed by Ananya Chatterjea in collaboration with Laurie Carlos, the performance featured an incredible score by Greg Schutte (using the talents of vocalists Carlos, Mankwe Ndosi, Pooja Goswami, Michelle Kinney, Renee Copeland, and Lela Pierce). How to even describe the music? It was an enormous part of the show, creating sounds that transformed the space, so that you felt like your were inside a vat of bubbling oil at times, or on a busy street corner, with this haunting mix of sound effects and ritualistic vocals.

Annie Katsura Rollins’s scenic and puppet designs, also helped create a mood of fear. The shadow puppets were bony, ghostlike creatures that hovered over the stage like specters of doom. Rollins’s costume design was also quite thoughtful, down to the rim of plastic tape around each of the dancers’ feet.

The choreography worked best when it shaped and formed images: the bird emerging from a sea of oil, as performed by Chitra Vairavan, was the most compelling example of this. There were also some heart-stopping moments when the entire ensemble was dancing together. The dancers were all very strong, and Chatterjea is at her best when she fills the whole stage with that ferocious energy.

The thing that didn’t work for me was an over-reliance on facial expressions that I thought detracted from the piece as a whole. At times, the dancers telegraphed emotions to the audience, rather than allowing us to be moved by what was happening. There were also times that I thought there was too much telling us, rather than showing us, the message. For example, there was a scene about “the ruthless pursuit of cosmetic notions of beauty,” as the program states, which I thought used too much indication.

On the other hand, there were many moments that did absolutely move me, especially at the end, when the whole company was dancing on stage, embodying the energy of the Occupy movement. It was electrifying, and then all of a sudden, a torrent of rice shot down at them from the ceiling. To me, I read this as the greedy corporations keeping the 99 percent down, but I could be wrong. Then, the dancers began to transform the space, creating circles of rice with their hands on the floor, and inviting audience members to join in. After a while, only a young girl was left on stage, playfully shaping the rice with her hands. That’s when I just lost it. Because it’s true. This world is for them: the young, our children, our children’s children. If we can’t figure it out for them, how can we live with ourselves?